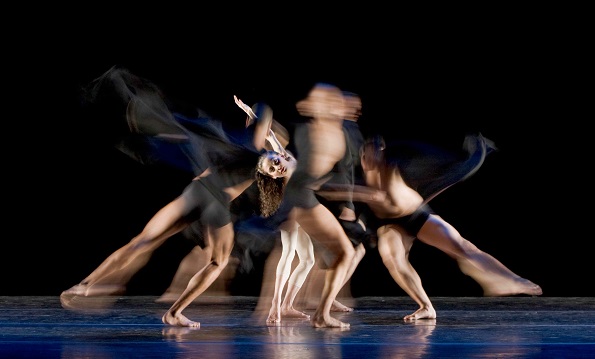 Last Friday, June 7th, RIOULT presented a full evening of four works at The Joyce Theater, three of which revolved around Greek mythology and featured female soloists. Overall, the movement and aesthetic seemed to be a homage to Martha Graham, which is fitting considering that Pascal Rioult danced for the Graham company as a principal dancer for many years.

The first piece on the roster was Iphigenia, a quite literal narrative of the Greek legend of Iphigenia’s transformation from girl to heroine as her father tries to sacrifice her life to appease an angry goddess. The storyline was supported by a narrator, Jacqueline Chambord, who guided the audience through the tale with a dramatic and somber voice. The dancing was picturesque and literal, with the dancers often acting out scenes like figurines. The stamping movements, core contractions, and vivid gender divide between men and women again invoked the influence of Martha Graham on Rioult’s work.

The dancers of RIOULT present ‘Bolero’. Photo by Basil Childers.

The following piece, Prelude to Night, was a vague yet dynamic take on a woman’s journey through three different states of dreaming and imagination. The mood was dark, with male figures looming and swirling around soloist Penelope Gonzalez as she transformed from one state to another. The set changes were vivid and dramatic, with pillars rising up to the rafters. Similarly, the emotional drama was high, almost as high as the extended series of partnered lifts where Gonzalez barely touched the ground for several minutes.

The character of Helen of Troy, danced by Charis Haines in On Distant Shores, brought lush, sensuous movement to a program of predominately rigid, statuesque choreography. Indeed, Haines performed with an ease that brought a breath of a fresh air to the high drama of the rest of the performance. Interestingly, in a program note, Rioult mentioned that in the play, Helen, by Eurpides, Helen doesn’t actually go to Troy, but it is her mirage, created by the gods and abducted by Paris to Troy, that causes the war.  A work of redemption, this work explored Helen’s character via solo work interspersed with duets between herself and fallen Trojan War Heroes.

After seeing the vivid, stand-out female characters of the first three works, the switch to unison among the full company in Bolero was a welcome change. A vivid backdrop reminiscent of an Italian Futurism painting set the scene for the sharp, regimented movement of the performers in silver unitards. Contrasting this militaristic idea were various solos and duets of slow, sustained balances, often breaking off into sensual, seemingly rebellious movement. Just as the composer Ravel worked with repeating very few musical phrases to create this oft-choreographed to piece of music, Rioult attempted to do the same with his movement, presenting the same ideas over and over to coincide with the music’s dramatic accumulation. In the end, the music brought the performers and the audience to their feet in an energetic crescendo.