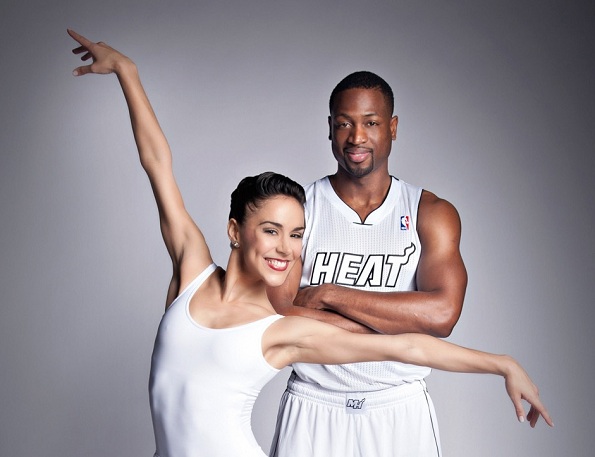 Professional basketball players and prima ballerinas might have a lot of differences – height, build, training and skills being some – but they also have a lot of similarities, including acute grace and finesse, utmost strength and physical prowess, as well as drive and passion.

These parallels between basketball players and ballerinas have recently been the inspiration for a photo campaign between the Miami City Ballet and Miami HEAT. 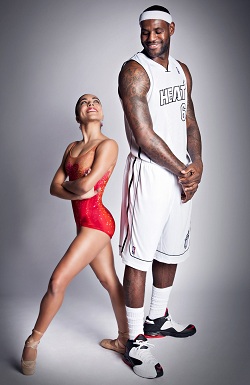 MCB Artistic Director Lourdes Lopez said the campaign was an “incredibly important” way to recognize these neighboring organizations and to applaud the athletes that generate them. She also drew parallels between basketball and ballet.

“Ballet and basketball are both about grace under pressure and the pursuit of perfection,” Lopez explained. “No Miami City Ballet dancer stands alone just as HEAT players can’t win alone. It requires teamwork—and that’s Miami!”

During the photo-shoot, Jeanette Delgado was paired with LeBron James while her sister Patricia Delgado was paired with Dwyane Wade. Jeanette, who was once heralded by The New York Times as “one of the world’s most marvelous ballerinas,” is pictured holding the basketball while James towers behind her. Likewise, Patricia, who The New York Times said “can catch the audience’s heart from her first entry and hold it,” expresses a playful nature with Wade – him standing with his arms crossed while she strikes a pose in the foreground.

While the final photos are basic, simple images lacking any complexity, they will now serve as an important centerpiece for a local and national campaign to promote the arts scene on Miami’s Biscayne Boulevard. 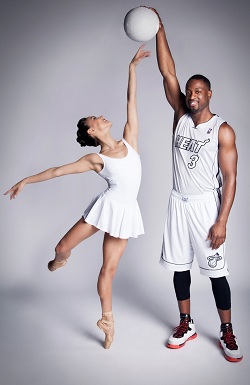 MCB’s Public Relations Manager Roberto Santiago said the partnership between the company and the HEAT first took form last year. “Essentially, it is the city’s best sports team and the city’s best performing arts company joining together to celebrate the best that each has to offer in the city that made it possible,” he surmised.

Michael McCullough, HEAT Executive Vice President and Chief Marketing Officer, also pointed out that the campaign is a reflection of a past collaboration between the organizations. About 25 years ago, an image of HEAT basketball player Billy Thompson posed with a MCB ballerina was made into a poster. “We had the idea to replicate that,” McCullough said in a television news interview.

“What these ladies do, as far as being ballerinas, is unique,” James said. “It’s great to have a couple of pictures with them in their poses—poses I’d never be able to get into!”

Wade added, “It’s always good for our fans to see something different out of us; to see us interact in a different way. We feel at times we’re like graceful dancers in the air so it’s good to put the two worlds together.”

On Sunday, February 10, the HEAT welcomed Jeanette and Patricia to their game against the Los Angeles Lakers. There they participated in various activities.

Lopez believes this exposure is important for the company, and all dance companies, because many people dissociate dancers from being athletes. This tends to create a great divide between the physical worlds of sports and dance, and ballet in particular.

“I think it is incredibly important because for the most part people don’t think of dancers as athletes. Now you have these athletes which are graceful and these dancers that are athletic,” Lopez said.

For more information on the campaign, visit www.MiamiBalletandBasketball.com.