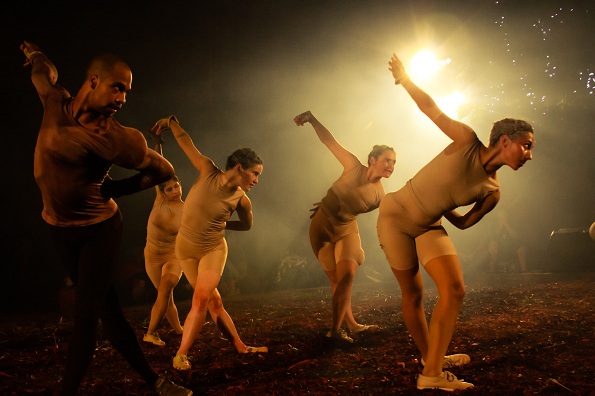 Atlanta, home of the Braves, hotspot for experimental foodies, site of the 1996 Olympics – it’s a city known for many things and a deep melting pot of diversity. Over the past several years, it’s also become a destination for artists interested in bringing Atlanta to the forefront of the nation’s contemporary art scene.

Lauri Stallings came to Atlanta in 2006 as the resident choreographer for Atlanta Ballet. She had no particular expectations from the position. But Atlanta bowled her over with its deep sense of community and rich arts. Thus, in 2009 after three years with the Atlanta Ballet, she decided to make Atlanta her home and carve out her own choreographic space in the city.

With four months of down time in between commissions, Stallings started meeting with local artists. There was no particular intention other than to “generate material, create synergy, and keep laboratory-ing this language of movement [that was developing],” says Stallings. Yet, something significant emerged out of the collaboration, an artistic entity that would become gloATL. 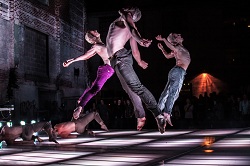 In a free public performance on July 24, 2009 at the Woodruff Art Center in Midtown Atlanta, gloATL debuted its vision to the world. The response was overwhelming.

“It caused a bit of a torque in the city…some were outraged and some were completely enthralled,” says Stallings. The evening “reoriented all of those preconceived notions about the experience of contemporary dance” in Atlanta. Stallings saw a chance to “give the public a role [within the city’s art] and the courage to conduct their own dialogue as the art is happening.”

“There are folks in our city who don’t know what to call it…is that dance? Is that performance art? Is that experience?” This is the conundrum of contemporary dance. So, perhaps it is indefinable and Stallings seems to prefer this. It’s constantly changing and Stallings is always on the hunt for new spaces and ways to challenge her artists, thus generating and motivating dialogue about the art form and how it affects Atlanta.

What is especially unique about gloATL is its accessibility and adaptability to space. No street, building, museum or historic landmark is off limits. “gloATL is a vehicle for conversation and for folks to not to have to come find us, or wonder what seat can I afford,” says Stallings.

She talks about her process in creating these often free, site-specific works, claiming she is “turned on by the architectural bones…or the mapping of a public space.” At the beginning of the creative process, Stallings spends a lot of time alone in the space as a pedestrian rather than a choreographer. Her body will respond to the building or space’s “skeletal system”. And she follows up these initial visits with research to discover the “architectural residue,” as she calls it. 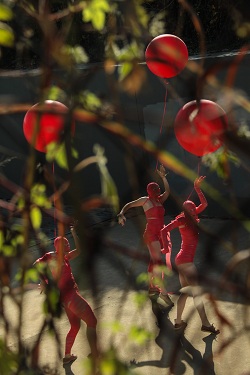 After completing this preparatory work, Stallings brings her dancers to the site, observing their instinctual physical responses to the space. “After digesting it, I throw it all away and get into the studio to generate lots of material,” says Stallings of the next step.

As the movement evolves in the studio, Stallings gradually goes back to the space and re-embraces its magic and mystery. “It’s like I marry it, divorce it and come back to say this relationship is great.” She calls the process “fairly layered” and says it “comes very slowly.” But the resulting work inspires all five senses of the human body, bringing about a dance experience unlike any other.

For the first three years, Stallings focused on defining gloATL’s identity. She describes these initial years as a “rather dense level of work and endurance to find that undeniable identity.” Ultimately, gloATL’s vision thrives on collaboration, providing for what Stalling calls a “collective platform.” Her dancers react to their instincts, an inclination to “be in the studio moving, dissecting, and sharing.” Dance is something inherent in them, something they have to do. “I ask them to do courageous things,” says Stallings admirably.

Now that this identity has been secured within the Atlanta community, she’s ready to start bringing in more outside choreographers to share in the vision.

As the company’s artistic vision grows and expands, the business side of the company must adapt as well. Currently, glo has no full time administrators, pouring its financial resources in the company’s five full time dancing artists. But Stallings does attribute much of the company’s success to Richard Carvlin, who is the stage manager for the Atlanta Symphony and has served as glo’s acting General Manager since its inception. She’s also grateful for her dancers, whose commitment to their art ensures the future of gloATL.

After three years of passionate work, the burgeoning company has much to look forward to. Right now, Stallings is shaping the company’s first Southeastern tour to expose rural areas to contemporary art. “It’s time to create bridges with artists in other communities,” she expresses. She hopes to continue to network and bring more contemporary artists to Atlanta for gloATL’s experimental art platform, Tanz Farm: A Dance Anthropology— a contemporary dance festival that brings artists and companies from all over the country to Atlanta’s Goat Farm Arts Center for a collaborative performance experience. Past performers have included Sidra Bell Dance New York and Seattle’s zoe/juniper.

Down the road, Stallings hopes to add one full-time administrator and expand the company from five dancers to seven. She would also like to continue to grow gloATL’s international reputation. Above all though, she stresses, “we don’t want to get bigger, we just want to get better.”