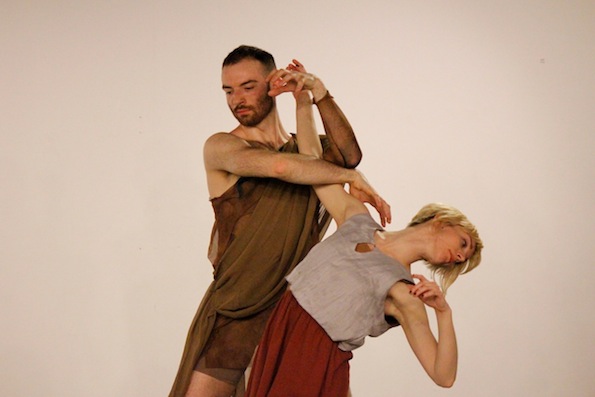 Only four months after assuming the role of Consul General of the Republic of Korea in New York, Se-joo Son welcomed a small but interested and intrigued crowd to the first Open Stage performance of 2013 at the Korean Cultural Service NY. We were about to see a “modern and multi-disciplinary” take on Korean dance that would be very different from the other performances produced this year by the Service, which are more traditional by the standards of Korean culture.

The performance this evening was with Yoo and Dancers, a small modern dance company led by Artistic Director and choreographer Hee Ra Yoo, who hails from South Korea. Yoo made her way to the US via Russia and Australia where she performed with companies as recognizable as The Kirov Ballet and Canberra Dance Theatre.

Though she has danced with major ballet companies, Yoo’s company has focused on exploring the modern genre with which she became engrossed though an MFA at New York University’s Tisch School of the Arts. Since 2009, Yoo and Dancers has presented modern dance in and around NYC, but it seems Yoo is branching out, or rather reaching back into her ballet arsenal.  For this performance, we see a somewhat multi-disciplinary take, not just in this presentation’s departure from Korean influence but also in Yoo’s crossover back into the realm of ballet.

This evening’s program includes three new works in two parts under the title of Glass Ceiling.  The opening work, Without a Net is a fairly literal expression of the title as well as Yoo’s description of Glass Ceiling – that it twists the audience’s perspective as to what is up, what is down and in what direction gravity is pulling.

Without a Net begins with two dancers traversing the stage on their sides with a string under their feet, sliding along the floor as if they are walking a tightrope, immediately establishing a new vertical. As jaunty and spry tunes tickle our ears, delightfully played live by pianist Jonathan Howard Katz, the dancers continue to use the string as a surface, walk on the wall, climb up the floor, “fall” to the wall, and nicely portray a silly story about trying to progress in this world with odd orientation, all the while gesturing liberally to let us know they are flustered but they will work together.

If the piece were to end with the duet, it would be a delightful, playful snippet successful in making the audience grin in seeing something different though not innovative. However, it continues with more dancers joining the duo on stage by “falling” from a doorway to the wall, and all using the walls as their floor to alter the definitions of up and down. Problems in execution begin to arise out of the dancers’ inequivalent strengths, which is quite apparent in this piece where the dancing is stripped of vocabulary and converted into theater with comedic gestures, mimicry and acts of physical strength. The variability in acting ability is acceptable in this small venue where we can accept the less expressive personalities because we can still make out their dull features as well as those of the dancers who exaggerate as if for a larger theater. 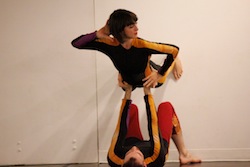 The leggy Lauren Camp emerges as a leader in the group with her clear depiction of clownish emotions that ranges from exasperation to elation within only a few moments. She also maintains throughout the kind of physical connectivity and clarity required in a floor-based work when the audience can mostly only see the dancer from above.

A highlight of Without a Net is a short break in the gesturing and crawling wherein Camp and her partner Yuki Ishiguro break into a ridiculous ground-bound pas de deux with all the bravura of the ballet spectacle, with lifts and leaps that are really splats and layouts on the floor. An almost-duel breaks out when a second couple, made by Lindsey Mandolini and Sean Hatch, counter the classical couple’s pompous process with a wall-based tango. Hip swivels and twisting legs are well seen from above as the couple battles for dominance at a 90-degree angle.

If the piece were to end there it would be a fun piece that lets the audience forget the usual overwrought dramatics of the theater and a more basic degree of dance with elementary gestures and a fun repositioning of perspective. It continues, however, with what now sums up to too much gesturing, too much crawling, and too much silly without substance. I enjoy the frivolity and theatricality of the piece but at the length it reaches, the wit turns to mush, and it goes from being a sweet treat to leaving a slightly saccharine taste in my mouth.

The second half of the program consists of two parts together titled The Unwritten. These two parts are completely different and I can’t imagine why they are coupled. Nonetheless, The Unwritten offers an alternative view of the creative starting point of choreographer Hee Ra Yoo – one that is more mature, creative and developed than the first. It is also her foray into ballet.

The first part is a group piece with five women en pointe in black ballet-gritty costumes with ribbon wrapping their legs, which mimics the red and orange-hued ribbons that adorn the walls in basic geometric shapes.

The choreography retains some of the literalism so exaggerated in Without a Net to define and bend boundaries established by the ribbons pulled from the walls and across the stage by the dancers to create a web of containment. The dancers interact with the ribbon as a barrier, a boundary they’d set for themselves. Pressing, stretching, twisting and plucking the ribbon, the dancers act both in defiance and with reluctant acceptance of their confinement. The piece develops into an exciting display of calculated movements that are precise and demanding, interlaced with frustrated flinging release embodied by thrown limbs. It becomes a thrilling combination.

The ballet would benefit greatly from a slightly different cast, one in which all members are equally and well adept at pointe work and the technical aesthetic of ballet. Mary-Elizabeth Fenn and Rebecca Walden stand out as strong, proficient dancers who convey a power and prowess over the movement and the gallery. They seem not as disturbed by the ribbon, the strength of their bodies en pointe matched by strength of character. Walden blends balletic and contemporary movement to powerful effect in a short, precise, well-structured and well-acted solo.

I am not sure at first why this segment of The Unwritten is en pointe. Why would a modern dance company create contemporary ballet? It is easy to see why Hee Ra Yoo could go in that direction with her background as a ballerina with exemplary companies around the world, but her own company has a focus on the modern genre. It leads me to take her for her word that Yoo and Dancers is without borders. After seeing a well-made contemporary ballet like this, it’s exciting to know that as a modern choreographer Yoo has successfully transferred her sensibility of movement to the pointe-clad dancer.

The second part of The Unwritten is the highlight of the evening for much of the audience: a very nicely constructed, delightful and moving duet between a curious girl and a living statue (Mary-Elizabeth Fenn and Sean Hatch). Off to the side a girl sits at the piano, turning pages but not commanding the keys. She listens to music that stirs in her a daydream that begins with a man, solitary and frozen, seemingly in the midst of movement. In her fantasy, she approaches. What does he depict? What would his movement be? Could it be a dance with her? Hee Ra Yoo’s characteristic gesturing with stylized hands and serpentine head lead the girl through her analysis of the statue that provokes him to life.

The piece itself takes on tremendous life along with the statue as he and the girl begin moving together, shifting with ease between rollicking phrases and playful partnering, describing a newfound camaraderie as if on a playground with a new friend. Things change abruptly though, and the newly-awakened statue is suddenly stopped and shunned by the girl who, without explanation, changes her mind about her playmate. We are left at a loss as to why she changes her mood or has become too mature for her playmate’s naive enthusiasm. Yoo should take more time to tell the story here. Quietly, the girl puts the statue back as he was, his wakeful consciousness rebelling and not understanding as she who awakened him returns him to his frozen state. She, regaining her staid complexion, returns to the piano bench and exits the dream.

While I would like to see this piece from a greater distance so that I cannot see the little things about the statue that are too lifelike, such as eyes that address his partner too early before he has awakened, and so that the piano could be on stage with the dancers, I enjoy this dance with my eyes and my heart and am pleased that it does not give into the cliché of its premise.

Overall, Yoo and Dancers gives its appreciative audience a diverse program with expansive dancing that speaks well for the versatility of Hee Ra Yoo in exercising both ballet and modern forms on the stage. I would like to think that Consul General Se-joo Son and the Korean Cultural Service NY find inspiration and insight in what Yoo presents using the breadth of her knowledge and background even though it avoids the trappings of Korean culture. With some talented new ballerinas along with the modern dancers in her hand, Yoo has the skill to take her company in many intriguing directions.

Find out more about Yoo and Dancers and Hee Ra Yoo as well as upcoming performances at yooanddancers.com. For more information on the Korean Cultural Service NY and Open Stage, visit koreanculture.org.