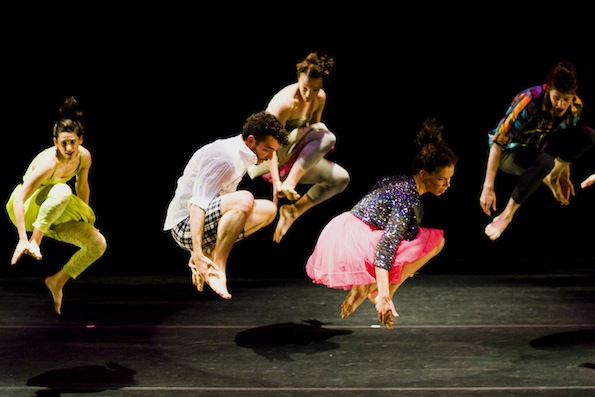 On February 16, the contemporary dance ensemble returned to Atlanta’s Rialto Center for the Arts for one night to present two works, Mama Call and Pupil Suite. After spending a few days in the city visiting Kennesaw State University’s Department of Dance and leading master classes at CORE studios in Decatur, Gallim had secured a large crowd that was bursting with eager fans and excited supporters. And Gallim Dance didn’t disappoint.

The evening started with Mama Call, a work that addresses Miller’s Sephardic-American heritage and themes of displacement. The first image was that of two dancers standing side-by-side facing a large moving spotlight onstage. As the light was pulled away from them (it was operated by another dancer) the two shuffled their feet in little steps forward, slowly and achingly seeking to follow the light. Their heads were tilted down, as if focused on their journey and the many steps to come.

Yet, the slow, weary movements did not last long. They only returned in intervals of intimate embraces and later, brief group clusters. Soon Miller’s work dived into the angst and anxiety that accompanies those who drift without belonging.

In ways only contemporary dance can achieve, one quartet of women expressed the pinnacle of alienation. Responding with fierce, explosive jumps, flinging arms and heavy stomps, they seemed to be saying, “No I will not accept this persecution. I will not go unnoticed.” In the beginning, they bounded back-and-forth in place like a pendulum being pushed right-to-left, slicing the air but not quite cutting. As their anger became more pronounced in aggressive movements a voiceover got increasingly fast, mirroring the dancers’ breathlessness.

Mama Call, at about 30 minutes total, closed with a beautiful, haunting duet. Miller said in a post-show discussion that it was meant to represent a “floating rootlessness.” Whereas a few props had been integrated up until this point, one being rootless trees strapped to dancers backs, the two dancers were now left to themselves. Dancer Francesca Romo scaled and mounted fellow dancer Austin Tyson’s body, seeking to always avoid the ground. Her suspension over the floor, achieved by Romo’s subtle strength and balance, constructed a tangible image of one floating.

Next, the mood lightened considerably with Pupil Suite, an assortment of excerpts from Miller’s 2008 piece I Can See Myself in Your Pupil. Set to the infectious music of Israeli band Balkan Beat Box, the choreography was wildly quirky and wholly enjoyable. It was described as “a joyous romp” and that is just what it was. Miller skillfully showcased her humor and wit through imaginative solos and duets.

Just one of the many memorable moments was a delectable solo performed by dancer Emily Terndup. Playing upon the audience’s sympathy, she tried with much difficulty and humor to lift and direct her suddenly limp legs. Sitting on the ground, she tied herself into knots again and again, showing off her significant flexibility.

Another section that rocked the theater was a comical, physical duet between Romo and fellow dancer Jonathan Royse Windham. Zany and inventive, the two dancers fell, jumped, pushed, shoved and jammed with abandon. Later, Miller even used her artistic freedoms to poke fun at classical ballet with a trio set to an opera by Bellini.

Overall, both of Miller’s works perfectly exhibited contemporary dance’s trending wit, invention, abstraction and lush movement vocabulary. Self-described as a Jewish-Catholic-Spanish-American, Miller’s rich familial history is in some ways a perfect mirror to her choreography, which is just as rich in diversity and multiplicity. It is easy to see how she is influenced by her experience with Gaga, an improvisational movement technique developed by Ohad Naharin.

It will be exciting to watch Miller and her small company continue to fearlessly challenge movement possibilities and command space, quality and intention. As the group continues to climb into the limelight Atlanta should be glad they have been exposed to this youthful, imaginative troupe.