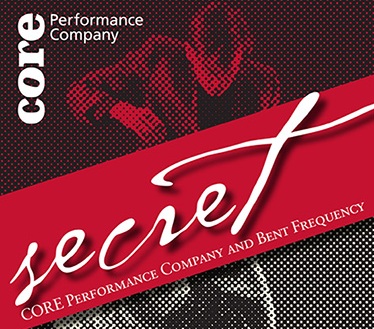 Audience members entered the Callanwolde space to encounter the feeling of being within a game of Clue brought to life. The gothic-tudor style mansion was especially stunning at night. White wooden folding chairs, lighted trees and musicians were scattered within the stark foyer. Those visuals, along with the rich smell of a space filled with history and a performance entitled Secret, created a multi-sensory delight.

Secret explored most of Callanwolde’s main floor spaces and the performers and audience members were in close proximity and constant motion. The dancers, however, did hold to preserving the fourth wall and that proved distracting to the work.  I became intrigued with continuing my premise that the seven cast members each represented the spirit of a historical character from Callanwolde’s vast history acting out a game of Clue.  Each dancer seemed coy about something within them, sharing snippets of fact and disclosing nothing. Ah, it was Professor Plumb in the library with the iron bar after all!

The dancers may well have embodied bare-footed spirits carrying their shoes in hope of transcending the space. It seems the characters ultimately realized a latent desire to remain at Callanwolde for eternity. Therefore, as the mansion became their eternal home, shoes were placed aside as unnecessary formalities.

The performance event transcended time and elicited wonder about whether the characters knew each other from similar periods of life span or some after-life encounters within the Callanwolde space. Secret proved itself as a mysterious and satisfying work of performance art and the collaborative spirit of the work seemed paramount to its creation.

Secret was conceptually dense and that proved to be its shortfall. The components seemed inspired by Callanwolde but transferred into the space, rather than created within it. CORE Performance Company’s dancers exhibited a range of technical and stylistic capabilities, though neither quality seemed challenged to the top range of the dancers’ abilities. Most of the movement presented held the dancers back from their full technical potential and employed a post-modern tendency to shun technically challenging movement in favor of the cerebral. The work did present glimpses of technical virtuosity. However, having seen several of these dancers perform other work in the Atlanta area, I was disappointed to acknowledge this was not a performance showcasing their technical and stylistic prowess.

Highlights of the night were a piece viewed triptych-art-style though opened doors and the closing, featuring the ensemble on the grand staircase. The triptych work capitalized on the depth and texture of space available within Callanwolde and the closing captured the essence of multi-generational spirits co-existing within a confined space.