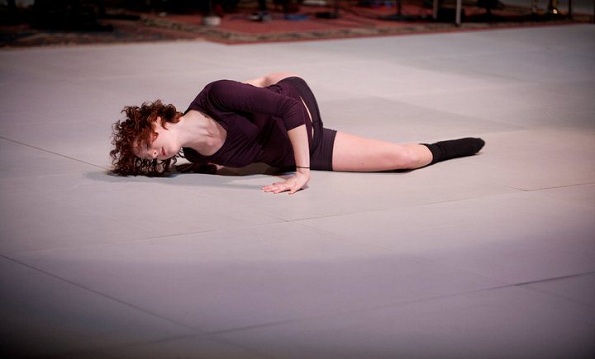 By habit, dancers crave approval. A parent’s proud applause, an instructor’s silent nod of appreciation, a critic’s sparkling write-up — such external approbation is food for a dancer’s soul. But for choreographer Kate Ladenheim, a discouraging remark or a skeptical review is just as desirable as the highest of praise.

At the age of 23, Ladenheim has yet to face any terribly scathing reviews. Though she has met with her fair share of rejection, she speaks about her work with remarkably easy self-assurance and conviction, characteristics that other artists spend their entire careers cultivating. And indeed, she has no need to doubt her creative capabilities. Within a year of her graduation from Boston Conservatory’s undergraduate dance program in 2011, Ladenheim had formed her own project-based company, The People Movers, with which she began to present her work at festivals and venues throughout the Northeast. Her desire to “be that yellow canvas” — to attract notice, engage minds and elicit strong responses — has her in perpetual motion, and she shows no sign of slowing down. 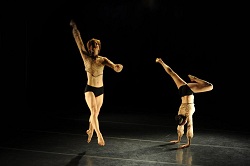 The People Movers perform ‘Bee Stings in My Bedroom’. Photo by Megan Cignoli

As Ladenheim’s dancers can attest, her energetic career path is a direct reflection of her choreographic philosophy. “Dance is physical,” the young dance-maker asserted. “I feel very strongly about that. I’m not good at stillness… I’m interested in the physical act of dancing. I’m interested in athleticism. I’m interested in exhaustion and how the body deals with that.”

Dancer Andrew Trego, also a Boston Conservatory alum and Ladenheim’s frequent dance partner, copes with this intense creative atmosphere by taking to the studio, the gym, the yoga mat — anything that will help him to keep pace with his energetic friend. “Kate is a magnificent machine,” Trego reported. “Her choreography demands endless energy, both physical and emotional, but I love the challenge.”

Equally valuable to Trego is the work environment that Ladenheim generates: “She trusts us and asks for our input. If something isn’t working, I let her know and we fix it together. Dancing for Kate is not just business, it’s personal.”

The pair’s sturdy creative partnership will prove useful in the coming months as Ladenheim continues to construct Pillars of Salt, a powerful duet that will premiere at the experimental New York performance space Dixon Place on April 2. Inspired by the myth of Orpheus and Eurydice, the project began as a physical exploration of love, loss and regret. 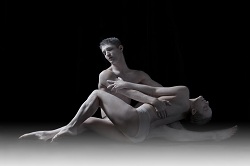 Kate Ladenheim and Andrew Trego in ‘Pillars of Salt’. Photo by Nir Arieli

“I was thinking about what it means to miss someone so much that you would brave the perils of the land of the dead to bring that person back,” she explained. “We’ve all missed someone like that. We’ve all lost something that we desperately wish we could get back.”

Not content merely to imagine the lovers’ plight, Ladenheim asked a friend with expertise in Greek mythology to write a script for her characters, to tease out what words the ill-fated pair would exchange had they had a chance to speak in the aftermath of Orpheus’ tragic mistake. But rather than clarify her artistic vision, this collaboration infused Pillars with a new depth. By the time the piece previewed in Boston and New York last year, Eurydice had become the biblical figure of Lot’s wife, and the focus of the work had shifted from a mere reflection on lost love to a statement on the gender politics of guilt — the variety of provocative, potentially controversial, subject matter Ladenheim loves to address. “If I feel that an idea generates movement, then I’ll work on it,” she said, even if that idea is not exactly easily digestible fare for her audience.

Yet as much as Ladenheim relishes challenging her viewers’ minds and her dancers’ bodies, she seems to savor opportunities to push her own limits much more. Near the end of 2012, she braved her greatest feat to date: sharing the creative reigns with artists outside of her tight-knit group. When commissioned to craft a piece for composer Peter Lane and the Juventas Music Ensemble last fall, Ladenheim found herself choreographing on a theme and to music not of her choosing for the first time. Anxious about the logistics of the project, but truly honored by the request, she dove into the making of Hackpolitik with an open mind. She said she ended up enjoying the process immensely.

“I knew that if I didn’t connect with the music for this piece, it would’ve been impossible,” she said, especially given the rather unusual topic — the true stories of Anonymous, an enterprising group of young computer hackers. “There’s a lot of movement written into the music Peter Lane created, a lot of nuance, and I actually think my choreography complements his score very well. It was never a struggle to come up with the next thing.” Ladenheim will expand Hackpolitik into an hour-long piece for its official world premiere in the latter half of 2013.

Busy as she is with her two current choreographic endeavors and a part-time job that helps to keep her and her company financially afloat, Ladenheim rarely rests in her search for more festivals, projects and possibilities to pursue.

“I work really hard — it’s not easy or cheap to do this. But I’m just not someone who gives up,” she said. “I moved to New York City so that I can have all of this dance and all of this art around me; so that I can be constantly inspired and shown something better than me and be pushed to improve in that way.”

If we’re lucky, maybe she’ll bring us along for the ride.

To learn more about Kate Ladenheim, visit kateladenheim.com. For more about The People Movers, visit peoplemoversdance.com.