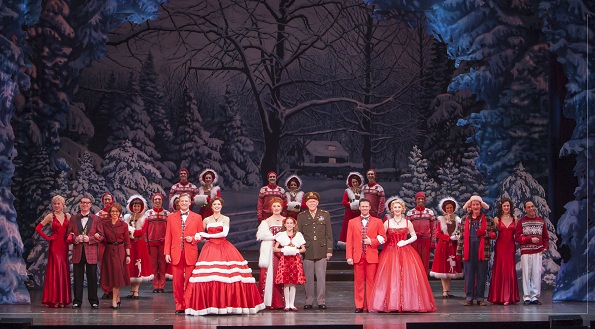 There was no snow on the ground outside, but there was plenty of white inside the Denver Center’s Temple Buell Theater on a post-Thanksgiving Sunday afternoon as the Denver Center Theatre Company, the Mile High City’s resident professional theater troupe, presented Irving Berlin’s White Christmas.

Based on the iconic Paramount Pictures film starring Bing Crosby, Danny Kaye, Rosemary Clooney and Vera-Ellen, the musical is an effervescent holiday treat with classic songs and spritely dance numbers. The theater company sang, tapped, sashayed and jingled with aplomb and gusto to a packed house, bringing out a sense of childhood wonderment in everyone watching.

Filled with timeless songs like “Count Your Blessings,” “Blue Skies,” “I’ve Got My Love to Keep Me Warm,” and, of course, “White Christmas,” it was impossible to deny the infectious merriment of the two-and-a-half-hour long musical. But this show wasn’t simply about it’s joyful tunes, it was also a showpiece for grand dance numbers.

The choreography by Patti Colombo, a musical theater and Broadway choreographic vet, held nothing back, pushing the skills and stamina of both the ensemble and principals. It definitely gave the audience a large helping of dance to counteract any residual tryptophan from Thanksgiving dinner. However, at times, the movement became too showy, resembling more of a Showstopper dance convention routine versus a 1950s musical. 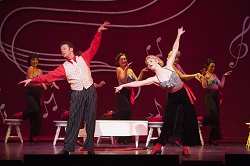 This was most evident in a duet between the principal characters ‘Phil Davis’ (Nicolas Dromard) and ‘Judy Haynes’ (Kate Marilley.) For the most part the triple threats excelled in their roles. Marilley’s voice was a throwback to another era and Dromard embodied Phil’s charisma and playboy antics. However, one particular scene didn’t highlight their strengths as dancers. The song called for a more Fred and Ginger ambience. Yet, the two sailed around the stage with Marilley kicking her leg high into penchee after penchee, followed by tricky lifts that had more of a place in a grande pas de duex from a classical ballet rather than a musical. Some moments caught the two in clumsy transitions with sickled feet. Not to mention the dance left Marilley too out of breath for the next scene. More simplicity would have sufficed here.

But there were plenty of memorable dance moments like “Happy Holidays” and “Blue Skies.” In “I Love a Piano” Marilley, Dromard and even Dorothy Stanley, who gave a lively interpretation of the wisecracking, meddling Martha Watson, showed off their tap dancing skills. The syncopated, delightful sound of synchronized hoofers and old-school musicals go together like bees and honey, making the number a natural opener for the second half.

For the entire duration of the show audience members beamed ear to ear as the cast entertained and delighted with high-energy song and dance numbers, sprinkled with humor and old Hollywood charm. Tom Galantich played a polished Bob Wallace, though at times maybe too refined, and Amy Bodnar was an elegant songstress in the leading role of Betty Haynes. Mike Hartman captured the stoic nature of General Henry Waverly while Melinda Cowan and Brandi Wooten were boisterous and comical as the slinky, gum-popping duo Rita and Rhoda. Randy Moore brought an abundance of comic relief as the doldrum barn-keeper-turned-stagehand Ezekiel Foster.

As Galantich invited the audience to join in for the final rendition of “White Christmas,” it was hard not to get bitten, or smitten, by the holiday bug. The final scene dazzled with red and white festive costumes, iconic holiday music, and unexpectedly, white fluffy snowflakes that cascaded down onto the audience. Audience members rose quickly to their feet as the entire cast took a seeping bow, followed by an encore that had all swaying and clapping to the rhythm of the music. White Christmas was a great, family-friendly way to kick off the holiday season.