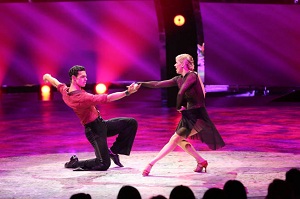 You may love to lead your partner onto the dance floor for a waltz or sultry tango, but how much do you actually know about Ballroom?

Where did the samba originate?

Which dance takes its inspiration from the spectacle of bullfighting?

Which is considered to be the oldest of the ballroom dances?

In what year was the foxtrot first danced?

In which movie would you find the characters Scott Hastings, Shirley Hastings, Fran and Barry Fyfe?

b) Shall We Dance?

Which of the following does not have its roots in Cuba?

True or false: Jive is derived from the jitterbug.

In Dancesport, east coast swing, bolero and mambo are all types of what?

True or false: Dancesport has been confirmed for inclusion in the Rio 2016 Summer Olympics.

Dancing With the Stars has been a popular TV show in many countries worldwide. Which country first aired the show on which the format is based?

Photo: Chehon Wespi-Tschopp and Anya Garis perform an Argentine Tango routine choreographed by Miriam Larici & Leonardo Barrionuevo on Season 9 of So You Think You Can Dance. ©2012 FOX Broadcasting Co. Photo by Mike Yarish.