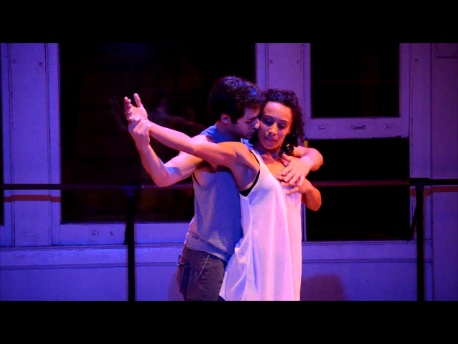 For the first time, Steps Repertory Ensemble, the resident contemporary dance company of Steps on Broadway in New York City, presented an evening of 11 new works created by members of the Ensemble themselves. What came to life was an evening of these talented young dancers dancing with each other, for each other and performing work by each other.

Each dancer had a moment to speak before his/her choreography. Some took this time to explain the piece or his/her intention, and some said little and chose to let the work speak for itself. There seemed to be shared themes of love and quirkiness; motifs probably prevalent in these young people’s lives. All in all, the evening showcased some definite up-and-coming dance talent and also introduced some new, interesting choreographic voices.

The Ensemble dancers are undoubtedly lovely performers and excellent technicians, but this performance became more about their skills as dance makers, which, for some may have been a first.

Emily Schoen, a dancer who draws you in with her presence and smile, presented the evening’s first work, Banjo Suite, a playful, quirky, all-female “mini ballet” set to folky bluegrass music. The dancers, all in country frocks, moved with ease as they seemed to have a dialogue with each other and with the music. Here, Schoen and her dancers seemed to portray the layered woman – graceful and “girly”, humorous and smart, and, by incorporating moments of partnering between the women, strong and capable. With this first glimpse of Schoen as a choreographer, and through watching her dance over the course of the evening, she is surely someone to follow. 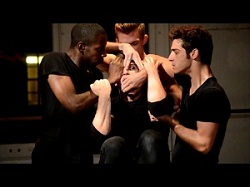 It May Not Be Here, Gabriel Malo’s story about love told through dance and the Brazilian prose over which it was performed, was a highlight. Marielis Garcia and Ricky Kuperman were luscious together as the couple in subject. The dancers were well-suited for one another. Individually they had freedom and ease, and together they were unified in movement and partnering. Malo’s work continued to build, encasing a story of heightened love and passion, until Kuperman was left onstage alone, left to ponder and the audience left to wonder.

Another memorable piece on the program was Kuperman’s own, Tit for Tat. It was a work for four men with music by Mark Korven. Kuperman described his piece as one about trusting relationships and surveillance. The men began to move over background street noise, then progressed to more dynamic movement and very impressive partnering sequences. They all captured a type of “breathy” strength, and it was very rewarding to see this group of men dance with such fearlessness and commitment. The partnering that Kuperman developed was especially hypnotic. The men were able to use their natural physical strength to create interesting, statuesque snapshots and hold them for a long moment. Overall, Tit for Tat was a very enjoyable and well-structured piece.

Lane Halperin also embraced solid partnering interactions in her Romp, set to electronic music, interlaced with wind chime-like sounds. Both dancers, Halperin and partner Clinton Edward, were dressed in summer attire and socks. Romp was playful. The dancers high-fived with their elbows, and toes and hands became an important choreographic tool. Edward has such a striking look, that it was hard to not watch him.

Another playful piece was Victor Larue’s La Vie en Rose, set to the famous song by Edith Piaf and danced beautifully by Ensemble rehearsal director Mindy Upin. Larue introduced his piece as one’s “own story” and encouraged the audience to interpret it as they wanted. Upin resembled a curious young girl in the piece. She’s a petite woman and she wore girly lace socks. Her character danced as though she was always on the verge of falling; trying to be cool and calm but always aware of people watching. Upin is a likeable, theatrical performer and undoubtedly was a natural choice for this role

The closing piece of the evening, Modnar is Random, was Upin’s own creation on the Ensemble. She prefaced the work by saying she was motivated by the oddities she saw during the summer in NYC. This was the first time we saw the entire Ensemble onstage together, and it was refreshing to see so many talented bodies, all unique in personality and movement quality, complement each other so well. The dancers started as a collective walking mass traveling through space, all dressed in some variation of cut-off jeans. One by one they left and changed into shiny, colorful leggings.

Modnar is Random was a well-crafted, enjoyable piece. As New Yorkers, the work brought out familiar gestures and made us recognize what Upin observed during the summer months. The dancers traveled through random pathways and came together for dynamic unison phrases. They finished in a slow motion clump downstage, where Halperin acted as though she was rocking out to her headphones, and the audience was left with a smile.

It was exciting to see so much dance, so much movement, in one evening. It was apparent that the dancers had all spent a considerable amount of time on their creation, and while some may have been more successful than others, it was inspiring to see so many ideas and voices in such a young crowd.