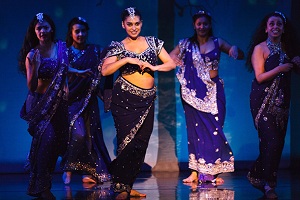 The theme of this British-Asian musical is “Britain meets Bollywood”. You could translate “Wah! Wah!” as how some Indian audiences express their joy at something they see or watch instead of clapping.

The musical as a whole still has a lot of development needed to be a raving West End success. The Indian classical choreography was the show’s strongest feature. The musical’s most captivating sections were when the story was looking back in time and using the traditional Indian dance styles.

The choreographers, Javed Sanadi and Gauri Sharma Tripathi have, with a team of creatives, pioneered something new for the stages of London. After the success of Bollywood films with large, colourful dance sequences, I’m sure this musical can continue to develop and be a greater success in the future. The general consensus is that it’s not quite there yet.

The storyline in summary, is that Bindi (Rina Fatania), an East Londoner, humorously sits down to watch television. On the TV (a scrim screen), a Bollywood dance begins, and the story emerges of a struggling Indian dance club run by Soraya (Sophiya Haque). Sophiya Haque was delightful to watch and clearly has dance training. She was a dancer that poured passion and fire into the choreography and was captivating as she moved seamlessly. However, the proportion in the cast of trained dancers to non-trained dancers was few and I would have liked to see more skill in the lines and shapes the company created as a whole. This is a difficult task to fulfil due to the cast needing to be Indian Asian looking, with professional singing and acting ability and the skills to dance Indian Classical and Bollywood dance styles. This is particularly difficult when the forms of dance involved in this show are deemed non-technical by western standards, but they need to please the western dance educated audience of Sadler’s Wells. I feel that Wah! Wah! Girls needs a sharper dance work as a whole that demonstrates a higher technical level within the dance styles on display by using more skilled dancers in the cast.

The story continues with the character Sita (Natasha Jayetileke) arriving from Leeds and falling in love with Soraya’s son Kabir (Tariq Jordan). 17-year-old Sita is on the run from her controlling big brother, and hides in the dancing club run by Soraya (Sophiya Haque), a former mujra dancer (traditionally a courtesan who dances for wealthy patrons). Soraya begins to battle it out with the new ways of dancing presented by Sita. This ‘dance off’ between the two was full of street dance mixed with Bollywood and Indian Classical, and although highly entertaining, could be further developed.

I would love to see this musical revive itself in future years, having implemented the constructive feedback reflected in the many reviews across London. It wouldn’t be the first British musical to not have a hugely successful first run but still go on to do hundreds of shows in its second run.