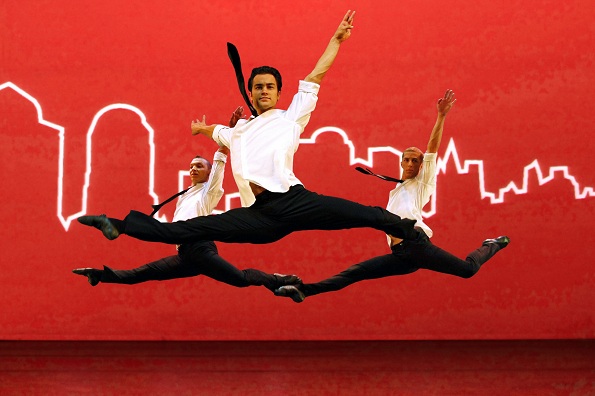 Rasta Thomas is touring globally with his production Rock The Ballet, to show audiences that ballet is still as relevant as ever.  Fusing classic ballet technique with hip hop, martial arts, tap, gymnastics, contemporary, and musical theater, the sexy and versatile dancers are set to impress new and old ballet audiences alike with a soundtrack consisting of U2, Michael Jackson, Prince, Queen, and Lenny Kravitz.  Thomas’s unique brand of pop ballet was founded in 2007 with Bad Boys of Dance, which became Rock the Ballet the following year. Comprising of six buff boys and one alluring girl, the production will no doubt be as entertaining for ballet lovers as it is for novice theatre goers.

A multi award winning director and principal dancer, Rasta Thomas has a CV which most dancers can only dream about.  The first ever American to become a member of the renowned Kirov Ballet, Thomas has also performed with Dance Theatre of Harlem, American Ballet Theater, Le Jeune Ballet de France, Hartford Ballet, and Japan’s K-Ballet. Additionally, he has also starred in Twyla Tharp’s hit musical Movin’ Out, and danced some of classical ballet’s greatest roles.  Oh, and Thomas has performed at The Academy Awards, danced at The White House, and made a film with Patrick Swayze. Then of course there was the phone call from Michael Jackson asking to meet with him….

It was Thomas’ desire to create his own work and imbue new roles with his own flair that pulled him away from the traditional ballet companies to form Rock The Ballet.  When Dance Informa spoke to him in Maryland, Thomas said he was “bored to an extent” with ballet, but acknowledged that it has taught him a lot.  However, the passion and energy he sought from ballet was missing: “I felt like I was doing the same steps I had been doing since I started ballet class at eight years old almost 20 years later.  The audience demographic was slightly older and more reserved, and (ballet) seemed to be for the elite and lofty.  The stereotype of ballet being boring and old was there, and I would tell my friends to come and see me in a ballet, and they would be like ‘nah, I’m OK…’ I tried to figure out how I could get my peers and friends to come and see ballet and why they weren’t open to that.  You know, I worked really hard and the ballets were beautiful but it just wasn’t translating.”  Thomas endeavored to remedy the stereotype and to add another flavor to ballet in order to get younger generations into the audience and have them excited about ballet. Without encouraging new audiences, he fears that when the current generation of ballet lovers has gone, there will be no one left to fill the theatres. 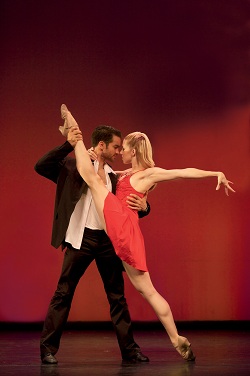 Rock The Ballet keeps ballet lovers satisfied with its use of traditional technique but is also able to excite those that have never seen a ballet or even a dance performance before. “Sometimes going to the ballet is like going to the museum”, explains Thomas.  “You’re not going to call someone from the museum and say ‘oh my, you’ve got to come see this painting!’, but we try to capture that fun-ness and excitement that comes with seeing something that you’ve never seen before.  There is so much seriousness in dance, with pieces that interpret war and other subjects through movement that only the choreographer really understands.  It is often too deep so it goes over everyone’s heads and I think the contemporary scene has been plagued by that abstractness.  I just wanted to make something that gets audiences excited and is accessible.  I think that is a noble goal in itself.”

When I asked Thomas what he looks for when hiring dancers for Rock The Ballet, he said, “the demands of the audience are the highest they’ve ever been – they’ve seen Swan Lakes, they’ve seen the greatest contemporary choreographers like Kylian, Nacho Duato or whoever – the choreographers now have to push the envelope even further and challenge the dancers even more.  So, versatility is the key, in addition to someone who is just born to dance.  A lot of dancers look at dance as a job because they need to put food on the table, but I’m more interested in the types of dancers who, once the show is over, want to go out to dance, go back to their homes to think about dance.  They just dream, live, and eat dance.  And it helps if they are sexy”, he adds with a laugh.

And meeting Michael Jackson?  “It was a dream.  I can’t remember a year when I was training that I wasn’t listening to his music.  He was embedded deep in my being for years so when I found out he actually called to say he wanted to meet me… He was very candid and open and very inspired by me being a dancer.  He just wanted to get into the studio and share the creative process.  He considered himself a dancer first and a singer second.  He was so humble and genuine, especially when I said that I was a fan of his songs. It was surreal.  I can’t say enough good things about him.”

As for what audiences can expect when they take their seats for Rock The Ballet, Thomas says the shows “will make you feel good”…