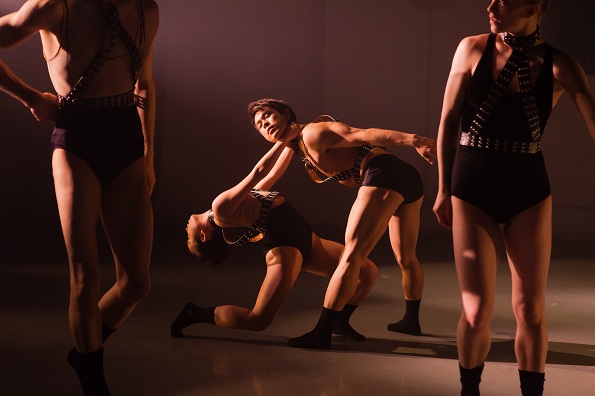 For its second season after a hiatus from 2007-2010, the Peridance Contemporary Dance Company, under the direction of Igal Perry (who originally founded the company in 1984), took the stage at its home theater, the Salvatore Capezio Theater.  Over two weekends, May 5-6 and May 12-13, the company presented an evening of works not only by Perry but also by guests Sidra Bell and Kristin Sudeikis. Jose Manuel Carreño also joined the company during its first weekend, as he danced a Perry solo, Ave Maria.

Even without the ballet star and obvious crowd draw, PCDC danced to a sold-out house during its second weekend of shows, proving its professional and artistic worth. The 10-member ensemble executed an impressive and expansive evening of interesting work. Most of the dancers performed in every piece -a seemingly exhausting feat – but came back refreshed and ready at the start of each work.

The evening opened with the premiere of Perry’s Conflicted Terrain, which began with a lone dancer, the tiny yet powerful Midori Nonaka, dragging a rope connected to a platform carrying an empty musician’s chair and music stand. A live string quartet quietly started to play, with each musician on a similar platform. One by one, and two by two, the dancers appeared in dim light, welcoming us to a series of recurring partnerships. 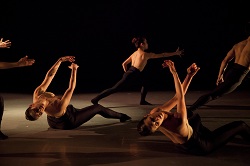 Joanna DeFelice and Leigh Lijoi in Kristin Sudeikis' 'I am you'. Photo by Krista Bonura.

Perry seemed to play with the sense of space and also the occasional separation or unity of audience, stage and “orchestra pit”. When the dancers performed a traveling box-like step, the stage appeared to move; and the space transformed again each time the dancers dragged the musicians to change their formations.

Conflicted Terrain was an opportunity to showcase the talent and technical capacity of the PCDC dancers. Leigh Lijoi’s long lines and Joanna DeFelice’s striking presence became recognizable right away.

In I am you, a premiere choreographed by Kristin Sudeikis, the dancers appeared almost bare (the women wore nude halters under their black leggings) and seemed to embody the phrase “dance like nobody’s watching” as the piece opened in a light, fun way as the dancers swayed and interacted with one another. In a musical change, the dancers moved in near slow motion.

The dancers soon lined up to face the audience and voiced self-proclamations: “I am so nervous,” said one dancer. They were naked in a new way – their honesty was exposed and raw. The moment passed, however, and the performers broke into fits of dancing freedom. Despite the musical changes seeming slightly too random, Sudeikis’ piece did showcase the PCDC dancers as once again being talented artists and movers.

During a pause in the program, the house proceeded to fill into a foggy cloud. This was an interesting effect, although it may have made the audience in a small, converted studio-theater space feel uncomfortable at first. Nikki Holck opened Sidra Bell’s The Ungathered with a stunning solo, and she became an interesting character and mover to watch throughout the remainder of the work. The dancers, dressed in variations of black leather bondage, continued to become more trapped, more possessed, in a cell-like world, at times pulling at the walls to try to escape.

Bell created interesting shapes, even in a sickled foot or a simple balletic grand plié. She also incorporated repetitive tendus – a darting of the foot as it slides along the floor to point – that made the step appear tedious and mad. Bell is interesting in her vocabulary and ideas, but the story of The Ungathered went on for just a bit too long.

The audience seemed to be most excited for Perry’s El Amor Brujo, the program’s closer. Perry impressively placed almost an entire orchestra at the back of the stage behind a cloudy scrim, and the live music was so nice in such a small concert venue. El Amor Brujo was a dramatic piece filled with Spanish dance nuances and a lovely balance of structure, stillness and movement.

Attila Csiki made his first appearance of the evening in El Amor Brujo and was a stand-out in the work, serving as a partner for Holck and as a remarkably fluid performer on his own. Holck and Csiki looked lovely together, and again eyes were also drawn to DeFelice.

Flamenco singer Marija Temo wandered on and off the stage, singing and acting as a storyteller for the love tale. Nothing seemed forced in El Amor Brujo; rather, the piece was seamless and natural in visual swings and levels, and also in mood.

PCDC is a wonderful ensemble of dancers, and the works presented in this season’s program allowed a chance for each to individually shine. I am glad that Perry also welcomed the work of other choreographers, as it was a nice balance for the audience and also for the dancers.