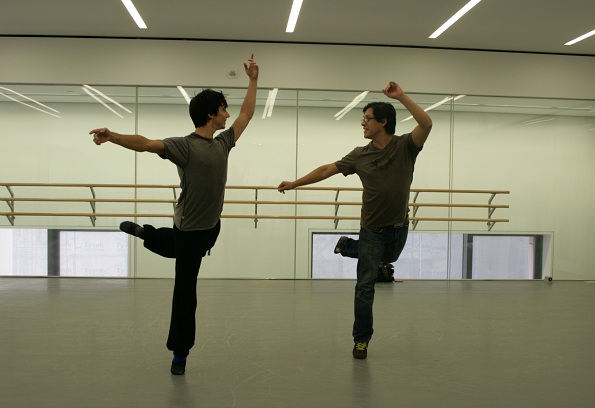 One rehearsal with choreographer David Fernandez is like a party – his energy is contagious, his humor non-stop, and his work makes his dancers want to dance. So imagining a string of rehearsals and 60 professional dancers culminating in one evening of Fernandez’s work seems unreal – like some giant dance party.

On February 27, 2012, at New York City’s El Teatro at El Museo del Barrio, Fernandez will present a collection of his work as he bids adieu to New York before relocating to London to be with his children. The performance will feature friends and dancers with whom he has worked from New York City Ballet, American Ballet Theatre and NYC’s freelance dance community.

Altogether, Fernandez calls his project ‘Some Dance Company’ – a group that will simply gather together for the sake of the joy of dance. “We are here to dance,” Fernandez says. “Just press play and we will dance…a lot!”

In the early fall of 2011, freelance dancer Kimberly Gianelli and a friend first conceived the idea to celebrate Fernandez and his work in New York before his move. What began as an event that involved 18 dancers in a 180-seat theater has since blossomed into a performance of nearly 100 dancers – about 60 professionals and 40 of Fernandez’s students – and will now be housed in the 600-seat venue of El Teatro. Gianelli, a first-time producer of such an event, did the bulk of the fundraising on Kickstarter.com and used facebook as a means to spread the word.

“I want David to embrace this opportunity and present his work with the integrity it deserves,” Gianelli says. “I want the audience to walk away having seen a performance that made them feel entertained and happy, and to have introduced them to a collection of incredible dancers and a kind and talented creator.”

Fernandez was born in Mexico City and trained at the Centro de Arte y Ballet and later Giordano Jazz Dance in Chicago. He has choreographed works for Dance Theatre of Harlem Ensemble, New Jersey Ballet, Opera North, Staten Island Ballet, and Westchester Ballet Company, amongst others. He has also been commissioned to create works for such ballet stars as Ask La Cour and Joaquin De Luz, both of whom will perform in the Some Dance Company performance.

Fernandez describes his choreography as “a very simple dance vocabulary that can range from classical pieces to modern works, with a focus on musicality. I don’t like to make heavy statements, have a super philosophy, try to change the dance world or fall victim to the pressure of having to say something very smart,” he adds. “They are quite simply pieces focused on just dance.” 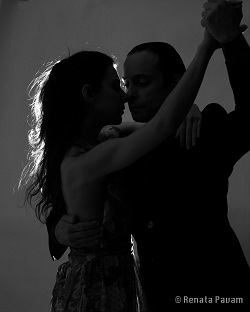 ABT's Luciana Paris and Argentine tango dancer Claudio Asprea, who will perform a tango number at the February 27 performance. Photo by Renata Pavam

ABT’s Luciana Paris says she looks forward to dancing at this event. “David has always been about having fun,” she says. “Some Dance Company is a group of dancers who were touched in some way by his potential, his drive, his inspiration, and his artistry, who want to dance in celebration of that.”

The current roster – including La Cour, De Luz, NYCB’s Gonzalo Garcia, Amar Ramasar, Chase Finlay and Savannah Lowery, and ABT’s Luciana Paris, Maria Riccetto and Nicole Graniero – is proof that dancers enjoy working with Fernandez. On a Monday night, which is, for many professional dancers, a day off, they will instead be donating their time and talent in his honor.

“David breaks through the limitation of choreographer and learns everything he can about his dancers – inside and out,” says Lowery, who will dance in Fernandez’s White Shirt, Black Tie, Black Pants. “He is a friend in the most loyal sense and inspires his dancers through his friendship and love of the art.”

Garcia, a NYCB principal, agrees. “He is a great guy, who I would hang out with and talk about life and ballet for hours,” Garcia says. “I love to be able to support a new talent who is so excited about his work and dance in general.”

“Professionals recognize his artistry,” Gianelli says. “David is so musical and provides a dancer an opportunity to explore so many different types of movements. His work has a sense of humor and a light-hearted nature that brings out a sense of joy. It is also quite challenging and demands a lot of stamina from the dancer. It’s like a puzzle piece that always fits together so seamlessly.”

“I have no words to describe the overwhelming feeling that I have from this event,” Fernandez says. “To know that all my dancers, friends and students have collaborated to make this possible and that they like to dance my pieces is the biggest honor that I can ever have. Because it comes from the dancers it is so special. Without them I’m nothing. I could have many ideas, but no dancer, no choreography and no fun.”

As a way to give thanks to the dancers for their time and energy, Fernandez has decided to donate all net proceeds from the February 27 performance to Career Transition for Dancers, an organization dedicated to providing a variety of resources to dancers.

To purchase tickets to “Some Dance Company: A David Fernandez Celebration”, featuring about 14 of Fernandez’s works, some old and a couple new, visit his website at www.davidferndance.com/tickets.htm.