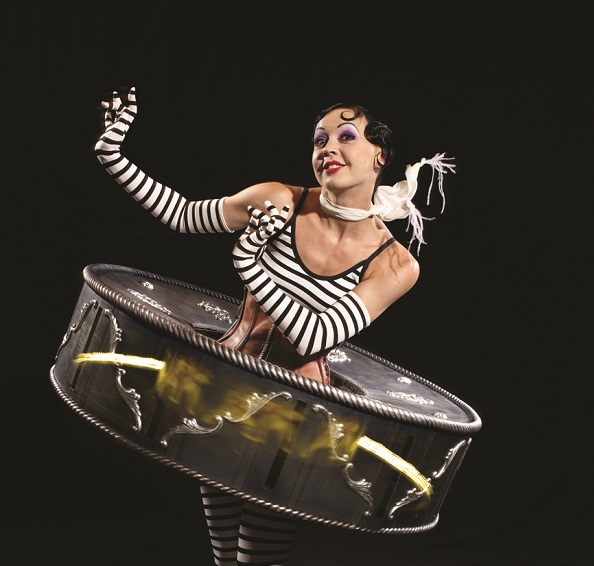 Who can take aerialists, dancers, character actors, acrobats, trampoline teams, hand balancing artists, contortionists, and hand-to-hand duets and immaculately tell the story and history of the silver screen? Cirque du Soleil can! Now add the extraordinary effects of live video feed and digital animation to enhance this cinematic journey and blend all of those elements together with Cirque’s signature ability to produce a show guided by incredible creators, directors, choreographers, composers and designers and you have IRIS. Lights, camera, action!

Cirque founder Guy Laliberté has described IRIS not as a tribute to the movies or Hollywood per se, but as a homage to cinematic craftsmanship, both behind and in front of the screen, and to the magical synergy of light, sound and motion.

Writer and Director Phillipe Decoufle and Creative Director Jean-Francois Bouchard are the imaginative geniuses behind IRIS. They have constructed a fanciful, innovative, and playful show to present the magic of cinema in LA’s Kodak Theatre. The mind-bending score, sets, lighting and costumes of IRIS are a show in itself.

IRIS started in the early days of black and white film with an incredible aerial strap duet, and continued along showing the evolution of this medium and the accompanying eras in film. The seamless transitions of IRIS are led by their funny character actors and clowns, who kept the show’s story of a composer named Buster falling in love with a young starlet, Scarlette, moving along, in and out of film and reality.

A clever film strip montage was impressive, utilizing the actors and dancers performing in a life-like three dimensional film strip resembling a train of box cars. NY gangsters flew back and fourth off trampolines in an exhilarating shoot-out that took place on the rooftops of skyscrapers in old New York City. 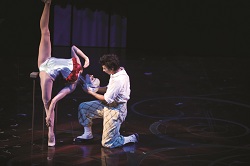 The piece that opened the second act was exuberant and colorful, incorporating the entire cast in a behind the scenes look at a multitude of well-known films. This number really showcased the talented dancers.

A hand balancing act performed by the aforementioned Scarlett and her lover Buster was lyrical and romantic, as was a trapeze and broom duet. The most fun was had when the actors included the audience in a spoof on the Academy Awards. Lastly, a finale of the trapeze artists flying from the top of the Kodak Theatre was phenomenal and invigorating.

Cirque du Soleil has outdone itself, yet again. IRIS is not only eye-candy, the experience is palpable, and it reminded me that there is no limit to how a story can be told or a subject, presented. I would go and see IRIS for a second time in a heartbeat, and thankfully I can because IRIS is likely to be at the Kodak for the next 10 years! Hooray for Los Angeles!