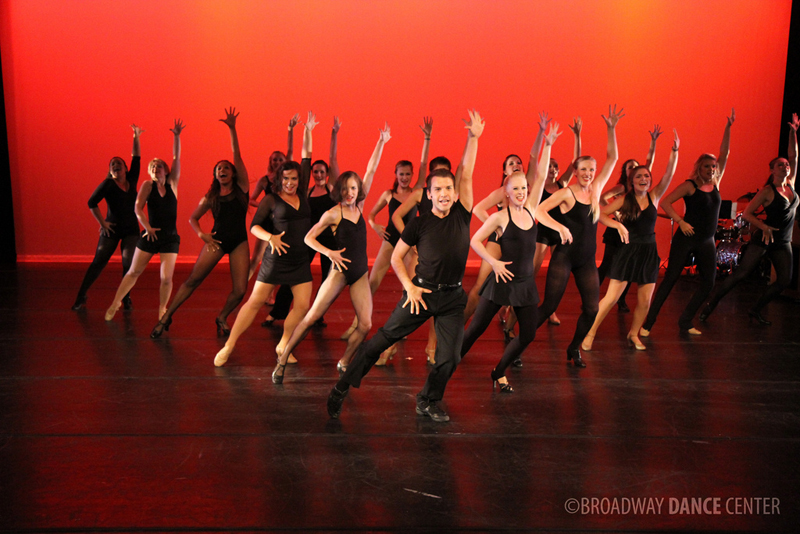 In its third year, the Broadway Dance Center Musical Theater Performance Project is out to prove that New York City is still the world capital in everything Broadway. In seven days, the participants hone their skills in nineteen dance classes, a mock audition, twenty-three hours of rehearsal, and talkback sessions at two Broadway shows. Most of them currently performing on Broadway or television, the faculty are all veterans of stage and screen. The culminating performance for this jam-packed week took place at the Ailey Citigroup Theater on August 15, 2011.

So who is the brainchild behind this intense program of musical theater mastership? The inimitable Joshua Bergasse. Before I was privileged enough to sit in the audience of this concluding event, I had had three of my fellow musical theater friends tell me that I just HAD to try my hand at Mr. Bergasse’s class at BDC, where he teaches on a weekly basis. In the musical theater community, the small world that it is, word of mouth serves as the highest kudos to any emerging director-choreographer, so I was excited to see Mr. Bergasse’s proven success in the form of this performance.

The bill had an all-star line-up of choreographers, each showcasing a distinct voice and highlighting the versatility that is essential to any aspiring musical theater performer. Pieces by Lorin Latarro, Noah Racey, Rachel Bress, Grady Bowman, Wendy Seyb, Melissa Rae Mahon, and Bill Castellino were presented, with standout works from Ms. Latarro, Mr. Racey, and Ms. Mahon. 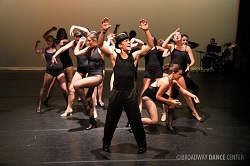 Me and My Shadow(s), Photo by Reese Snow

Known for her roles in Movin’ Out and A Chorus Line, Lorin Latarro presented ‘Little Me’, a dynamic piece for eighteen women. Donning black leotards, nude legs, and LaDucas, the ladies executed a classic number, complete with top hats, canes, and a couple of high kicks to boot. The call-and-response style of the song was mirrored in the movement, with the nine pairs of women high kicking, pelvic thrusting, and ball-changing while in partnership for the majority of the piece. It is evident Ms. Latarro has found an effective balance between her extensive modern and theater dance backgrounds, with movement that is smartly attuned musically. Her choreography is also able to eat up space with intense immediacy. A clean, sleek, classic jazz piece, Latarro had these women charging through the space and moving with a fluidity that allowed both their sharp technique and dynamic vocals to take center stage.

Noah Racey’s ‘Brother, Can You Spare a Dime’ showcased the most convincing acting of the night. The performers, clad in basic black, began the piece in a line across the stage. One by one, sighs of dejection in great variety emerged and this disgruntlement escalated until a solo vocalist (the highly entertaining Patrick Mars) emerged to explain the story of desperation and longing. Racey’s simplicity was extremely refreshing. In a style of theater that constantly gets pinned for favoring shine over substance, I felt a closeness and sincerity from the performers that was lacking in many of the other works.  His uncomplicated choreography of controlled stomping and walking allowed the individuality of the performers to effortlessly emerge. Subtle without being too monotonous, detailed without being too overwhelming, I felt Mr. Racey’s sophisticated ease made for the best work of the evening.

No good musical theater training will ever go without a nod to the master himself: Bob Fosse. In Melissa Rae Mahon’s ‘Juggernaut’, we saw the biggest nod to the legendary dancemaker and the most impressive dancing of the evening. Eighteen ladies clad in their character heels highlighted Mahon’s many Fosse-inspired moments with a sultry gracefulness. Nods to signature ‘Frug’ and moves with a little ‘Lola’ attitude showcased these performers to their best dance ability. On top of that, ‘Juggernaut’ gave me a little boost of hope that Fosse’s signature swanky style will continue to live in the 21st century world of Broadway.

Either way, Bergasse’s influence will continue to reside over today’s musical theater elite. It was announced at the end of the program that he is the Associate Choreographer for Smash, a new Glee-inspired, Spielberg-produced sitcom premiering on NBC early next year. If you can’t wait until then, catch him at Broadway Dance Center every Monday, Wednesday, and Friday at 4:00pm and see what the hype is about!