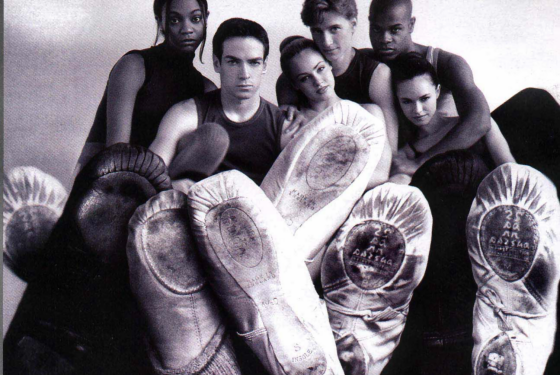 We all have our favorite dance flicks. In our last edition I shared with you some of my all time top picks. Here I list some of the more recent dance films that are sure to get you dancing in your lounge room.

Strictly Ballroom (1992)
Strictly Ballroom was an instant classic. Director Baz Luhrmann’s signature style – with its rich colors, glamorous theatricality and underlying darkness – is a perfect fit for the world of competition ballroom dancing. Comedy, drama, outstanding dance sequences and scary stage mums – this film has it all.

Swing Kids (1993)
Set in pre-World War 2 Germany, this is the story of a group of friends whose lives and views are being warped by Nazism. Thomas and Peter are Hitler Youth by day, but at night they are counter-culture ‘Swing Kids’, which involves dancing to ‘degenerate’ swing music. This film had pretty poor reviews, but it’s worth watching just for the wild, big band dance scenes – and to see Christian Bale on the dance floor!

Shall We Dansu?/Shall We Dance? (1996/2004)
This Japanese movie tells the story of how learning to dance brings one man out of his depression, renewing his energy for life. Eight years after its release, an American remake was made, starring Jennifer Lopez, Susan Sarandon and Richard Gere. There have been a few adaptations to adhere to the differences in culture, and as always, the original is better, but the remake is actually pretty good too.

The Tango Lesson (1997)
Sally, a British filmmaker, suffering from writer’s block, takes a break to Paris, where she meets Argentinian Tango master, Pablo Veron. She convinces him to give her tango lessons, in exchange for a part in her film. This is a semi-autobiographical account of Director Sally Potter’s relationship with Veron. Shot beautifully in black and white and with a generous helping of dance scenes, it is a must-see for fans of all dance styles.

Center Stage (2000)
In the same category of completely unabashed cheesiness as Footloose and Flashdance, Centre Stage is a classic dance movie. Some hilariously bad acting combine with a corny script, cornier choreography, but tremendous dancing, to create this story of a group of dancers at a top ballet school in New York City. The characters are one-dimensional with predictable problems such as eating disorders and stage mum issues, but who cares? This is pure, light-hearted dance entertainment!

Billy Elliot (2000)
A guaranteed tear-jerker every time, Billy Elliot is a feel-good movie with substance. Growing up in the grim, grey North of England during the 1980s miners’ strike, Billy defies convention, societal expectation, and his mining father to become a professional ballet dancer. Billy Elliot has since been made into a hugely successful stage musical. This is one of the top ten dance movies of all time – according to this reviewer, and I challenge anyone to watch it and keep a dry eye at the end.

Save the Last Dance (2001)
If Center Stage revived the 80s trend of super cheesy dance movies, Save the Last Dance kept it real as it upped the cheese ante by adding a few more clichés to the mix. If you’re into street dance styles, can forgive bad scripting, and can get past Julia Stiles as the lead, you are probably already a fan of this movie.

Chicago (2002)
As a massive fan of Bob Fosse and of the original stage musical, when I heard this film was being made, I was filled with a mixture of excitement and trepidation. But to my delight, it is a fine adaptation, and even scrapes into my top ten. A few choice numbers have been deleted, and Renee Zellweger seriously needs to eat some pies, but besides that, I have nothing to complain about! The Cell Block Tango is a particularly awesome interpretation. I think Bob would’ve been proud.

The Company (2003)
Starring Neve Campbell, Michael McDowell and James Franco, The Company is about the Joffrey Ballet of Chicago. It is comprised of different stories from people in the real-life company, and most of the actors are actual company members. Campbell, an ex-dancer, co-wrote and co-produced the film.

Honey (2003)
In my opinion, Honey blends with Save the Last Dance and the Step Up franchise to form one endless mess of predictability and bad dialogue. It’s about following your dreams, and doing it your way. On the plus side – if you are into mainstream hip hop that is – there are appearances from Missy Elliot, Ginuwine and Tweet, and Jessica Alba is pretty hot.

Rize (2005)
Written and directed by David LaChappell, Rize is a documentary looking at two dance subcultures of Los Angeles; clowning and krumping. Comprised of interviews with the founders and key players, it includes much historical information, and draws parallels between the two styles and African ritual dance. It is a must-watch for anyone interested in street culture or dance of any style. Visually it is stunning; the abilities of the dancers is mind-blowing.

Ballets Russes (2005)
A documentary from the opposite end of the dance spectrum, Ballets Russes chronicles the history of the ground-breaking Ballets Russes de Monte Carlo, from debut to swan song. It features interviews with elderly ex-company members including Irina Baronova and Alicia Markova, and details the merging of dancers, choreographers, composers and designers who revolutionized an art form and influenced every dancer since. You do not have to be a ballet fan to enjoy this, it is an incredible film.

Step Up (2006)
With a premise reminiscent of Gregory Hines’ Tap (1989), Step Up tells the story of a troubled young man for whom dancing is an alternative to vandalism and car theft. Step Up spawned two sequels, including one that was released in 3D, and, in case you’re still not satisfied, a fourth is due for release in 2012!

Planet B-Boy (2007)
This documentary chronicles breaking, from its birth in New York City in the 70s, to the worldwide culture it has become. Directed by Benson Lee, it focuses on the 2005 Battle of the Year, and five particular crews in the competition, representing France, Japan, South Korea, and the United States. It includes extensive footage of the world’s best breakers, and interviews with the movers and shakers of this vibrant culture.

La Danse (2009)
This is a documentary about the Paris Opera Ballet and its production of seven different ballets. Director Frederick Wiseman is known for his raw, non-narrative style, and La Danse is a good example of this. This film had critics divided – some say it is the best film about dance ever made, others are exasperated by scenes that seem meandering and superfluous. Me? I’m a fan, and if you are interested in the behind-the-scenes workings of a professional dance company, chances are you will be too.

This Is It (2009)
From veteran choreographer, director and producer Kenny Ortega comes this controversial documentary about Michael Jackson. Filmed during rehearsals for Jackson’s This Is It tour, the footage was not originally intended for a film, but after his sudden death 18 days before the tour, the decision was made to release it as a documentary. If you’re a fan, it’s pretty hard to resist getting a behind-the-scenes look at a legend in action.

Fame (2009)
Nineteen years after the original, a remake of this classic movie musical was made. Centered on a group of students at the New York Academy of Performing Arts, and performed by young talented artists, this movie was popular, but begs the simple question, ‘Why?’ Why remake a cult classic?

Mao’s Last Dancer (2009)
This is based on the incredible autobiography of Li Cunxin, the ballet dancer who escaped Communist China and became one of America’s, then Australia’s brightest stars. Although it doesn’t even come close to being as amazing as the book, it is still an excellent insight into what this wonderful dancer went through, and the sacrifices he made. With choreography by Graeme Murphy and Janet Vernon, and appearances by dancers of The Australian Ballet and Sydney Dance Company, the dancing is high quality too.

Black Swan (2010)
One of the most talked about movies of the last year, Black Swan really gets under your skin. As with much of Director Darren Aronofsky’s work, there are sequences that are difficult to watch. It is the story of one young dancer’s psychological descent, and although it is not a realistic depiction of the ballet world, it is completely engrossing as a dark, thriller fantasy. There was a lot of publicity to the tune of ‘did she or didn’t she dance her own steps?’, but Natalie Portman won an Oscar for her leading role.