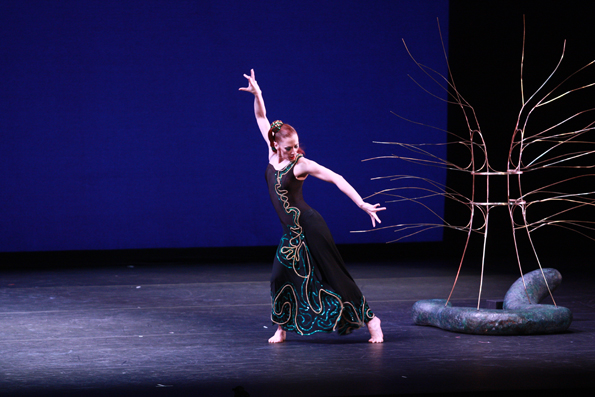 Pioneer, collaborator, visionary; these are just some of the terms aptly used to reference the life and work of the great Martha Graham (1894-1991).  Martha’s namesake company, founded by Graham in 1926 and currently under the artistic direction of Janet Eilber, celebrated Graham’s life and work with 85th anniversary performances on March 15-20 at the Rose Theater in New York.

I had the pleasure of speaking with Katherine Crockett, a principal dancer with the Martha Graham Company since 1996 and a company member since 1993, as she took a rehearsal break on the eve of the Company’s opening Gala of their New York engagement. We spoke of many things, beginning with her first experiences in the Graham style. “I was about 16 years old when I first experienced Graham work and I fell immediately in love with it.  I felt this premonition of a woman and found within me a primal energy; an emotional and physical truth. I felt like when I came across Martha’s work it was the beginning of an incredible journey that I still continue.  And, as Martha danced into her 70s, her creativity continued to blossom.  Even though her body could no longer express, she projected that creativity out of other bodies; it was a necessity for her.  I find her long and prolific career enables women, requires women, to be more mature.  You can’t play these characters without a deep understanding of life”, she passionately shared. 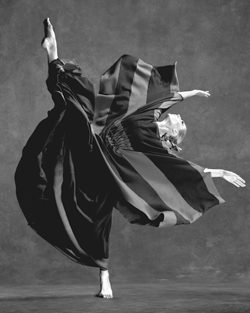 Crockett quotes Martha as saying, “It takes 10 years to make a dancer; that’s 10 years of training.  It takes another 10 years to find the being you are”. To this Crockett adds that “spellbinding steps and virtuosity are only part; you must continue the exploration of the self in order to physically explore her work.  That’s why an audience member has such  visceral reactions to the Martha Graham repertoire – that visceral connection begins in the dancer.”

The Graham Company’s opening night performance featured the Snow on the Mesa, originally choreographed by Robert Wilson in 1995 after Martha Graham’s death, now reconstructed for the Company’s 85th Anniversary performances. Wilson is quoted as calling Snow on the Mesa ‘a personal portrait of Martha Graham…evoking the creative journey of the artist…and the path that chose her, as Graham said’. Katherine Crockett was in the piece’s original cast and is now dancing the work again, though with 13 years more experience. She commented on how much she has grown during this time and how many components of Wilson’s work have also evolved or changed.  “Robert is a genius of a director and he helps the dancers find personal experiences so the piece relates to Martha’s life though our own lives. You see moments of struggle, anger, beauty, affection and quirky strange moments of duality (speaking of Graham’s dichotomous relationship between her passionate and Puritanical/Shaker sensibilities).

“Snow on the Mesa captures the formality and the incredible animal (of Graham) all of course with Robert Wilson’s aesthetic; which is phenomenal”, Crockett shared, fondly referencing Wilson’s direction for space, steps, and character as “jewels I preserve in my notebook.”

The 85th anniversary performances are bursting with examples of Martha Graham’s legacy and we must all celebrate this hard earned milestone in the Company’s history.  However, we must note that the Graham Company is yet another arts organization in need of us extending support beyond our ticket purchases. I asked Katherine about ways in which people could facilitate the Martha Graham Company’s vision and she responded with, “write letters in support of the NEA to your congress people and make donations to the accredited and full time Graham school. The Graham Company needs your support.”  Crockett added, “think of ways to create together with the Martha Graham Company. Perhaps if someone in the fashion industry is interested in costuming for dance they could contact the Graham Company about a possible costuming internship. The Graham Company is an open and creative atmosphere. So many things are possible. We are not stuck in doing things our own way. We can create together!”

Katherine Crockett’s passion for the Martha Graham Company is perhaps best evidenced when she responded to my inquiry about her biggest hopes and dreams for the company within the next year. “The thing that would be wonderful is to be able to tour with our big sets.  If the Martha Graham Company was able to get a lump sum of money we could really travel with whatever sets we wanted and fully produce the pieces from our repertoire, including traveling with a large cast.  It would be really wonderful to tour our glorious works without a cut here and there.  And, my other big dream would be to dance with a live orchestra for every performance. I’d like to be able to tour with big sets, a full company, and live music”, she said.

Crockett’s dedication to the Graham Company’s welfare is testament to her understanding of its inherent relevance throughout 85 years of work.  The Martha Graham Dance Company is alive and well and Martha’s spirit lives on.