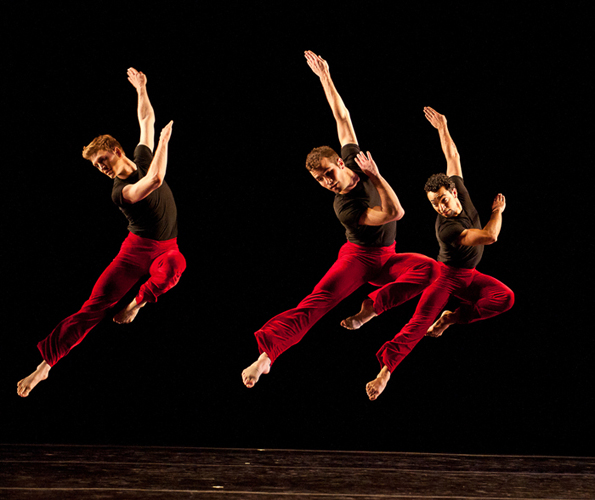 From Samuel Barber to Lionel Richie

Looking to escape the bitter cold that is enveloping New York these days?
Well, Parsons Dance and its company of inexhaustible artists are heating up the night with world premieres, old classics and an amusing and touching piece by guest choreographer Monica Bill Barnes. The evening of dance showcases David Parsons choreography “through the years” (which, incidentally, is one of several Lionel Richie songs used by the guest choreographer) and displays the strength, ingenuity and energy that has made this man a staple in contemporary dance.

Program B opens with Parson’s 1993 piece Bachiana. Though not my favorite piece of the night, it was an energetic and whimsical start to the evening with lovely duets, synchronized arm movements and beautiful stage pictures utilizing the full company.

I was literally on the edge of my seat for the next piece, the world premiere of Portinari, which featured the emotionally-drenched “Adagio for Strings” by Samuel Barber (one of my favorite pieces of music). Inspired by Brazilian painter and muralist Candido Portinari, Miguel Quinones and Sarah Braverman gave incredible performances, though I felt the choreography fought against the music. I understand him not choreographing exactly to every beat and swell of the music, but Barber’s “Adagio” is so well known that I would have liked the movement to have eventually given over to the sweeping and aching melodies, especially during the climactic held note. 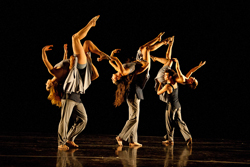 Slow Dance, a Parsons favorite from 2003, was up next and featured three couples doing some visually stunning lifts and creating beautiful geometric shapes that looked like a contemporary dance postcard. The impressive partnering, body movements and togetherness brought feelings of relationships, the passing of time and the falling and flailing that can happen in life. The most striking moment was the percussive puffs of frantic breath as the movement surged to its frenzied conclusion.

Love, Oh Love, a quirky piece by guest choreographer Monica Bill Barnes, featured the smooth sounds of Lionel Richie’s “Truly,” “Through the Years,” and “Endless Love.” The dancers were dressed as if at a wedding reception, but as the dance began we knew something was special about this group of partiers. When the party guests began amusingly picking up body parts off the floor, you then saw them as a group of seniors trying to ‘boogie down’ without breaking apart. What started off as a comic piece about growing old gave way to a poignant tale of two people navigating through life after “love at first sight”. Steven Vaughn and the incredibly expressive Miguel Quinones each had their own set of backup dancers to support them through the clumsiness, the fear, the caution and the mystery of courtship. The humor and tenderness used in the storytelling, along with clever ode to the wedding line-dances we all love to hate, made this piece unforgettable and an audience favorite.

I found myself once again on the edge of my seat for Caught. I had heard so much buzz about this piece, but nothing could have prepared me for what transpired. Miguel Quinones, who should receive top billing, exuded strength and sexuality while creating visuals that have been permanently burned into my brain. I watched most of the piece with my mouth agape having no idea what was happening. My brain couldn’t seem to fully comprehend what my eyes were taking in.  Was this man actually flying? I loved every second of it. It is no wonder this magical piece still holds up three decades after its creation.

The effervescent Nascimento ended the evening and brought the entire company back together. The music by Milton Nascimento provided a bouncy and life-loving beat that was evident in every leap and frolic. I felt like I was watching people on an island, possibly a tribe, interacting, playing, running on the beach and dancing. Though at first jealous of seeing these obviously warm individuals dancing in the sunlight (as another storm was approaching the city), I was eventually taken over by the infectious drums and guttural vocals that kept this piece moving, and the audience smiling.

A spectacular variety of strength, passion, art, laughter and love, Parsons Dance really brought the best of what they do to New York. I think Samuel Barber, and yes, even Lionel Richie would be proud.