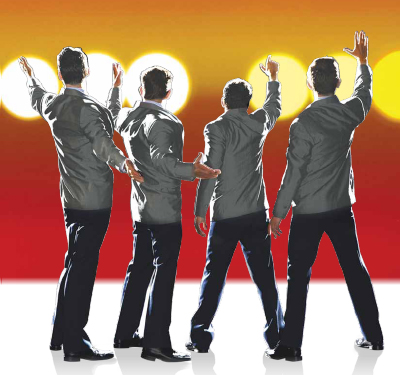 There was a sense of excitement and anticipation at the opening night of Jersey Boys at Sydney’s Theatre Royal. Could a musical that has won so many prestigious awards; a Laurence Olivier, a Grammy, multiple Tony Awards and a Helpmann Award for ‘Best Musical’, really live up to the high expectations of Sydney’s opening night crowd? Measured by the standing ovation received from the first to the last row in the theatre, the answer is a resounding yes!

Set in the 1960’s, Jersey Boys tells the story behind the phenomenal musical quartet Frankie Valli and The Four Seasons. We follow the lives of four boys from Jersey; Tommy De Vito (Scott Johnson), Bob Gaudio (Stephen Mahy), Nick Massi (Glaston Toft) and Frankie Valli (Bobby Fox) on their rise to becoming one of America’s most famous pop sensations. The show is structured into four seasons; spring, summer, fall and winter, with each actor taking their turn to narrate. We hear their individual perspectives on the series of events that brought them together and witness their struggles to ‘make it big’ in the music world. We experience the tragedy of addiction, jealously and cheating at the height of their careers, which ultimately led to self destruction.

It’s the rich and dynamic storyline combined with almost two decades of hit songs that makes this musical a success. Even if you weren’t born in the 1960’s, you surely would have come across some of their catchy jukebox hits including “Big Girls Don’t Cry”, “Sherry”, “Walk Like a Man”, “My Boyfriends Back”, “Who Loves You” and “Oh, What a Night”. Leading the sweet smooth harmonies is Bobby Fox, who provides an extraordinary performance in the role of Frankie Valli, hitting the high falsetto notes with ease. It is hard to fault any of the four lead actors who give an outstanding performance showcasing their exceptional acting and vocal skills.

Sergio Trujillo, the original Broadway choreographer, complemented the sensational music with simplistic yet effective choreography. This is executed with sharp precision, with all four actors never missing a beat. The production is well staged with the use of big screens bringing to life the changes in seasons. At one point the screens project footage of the group performing, creating the perspective that the audience is watching black and white footage of their performance on a television show; a very engaging and creative use of set design.

It’s easy to see why Jersey Boys is an international hit. Its recipe for success includes: a dynamic storyline based on a true story, exceptional singing, talented actors, precision dance movements and brilliant music that together makes for a highly entertaining show!

To find out more about this musical visit www.jerseyboysaustralia.com.au