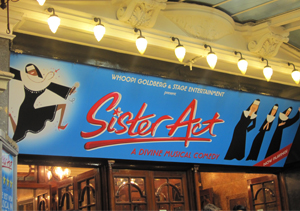 A trip to London is incomplete without a visit to the West End theatre district. The West End is home to timeless musicals including Chicago, Oliver! and of course Les Misérables which has achieved a record breaking 21 years on the West End stage! To compete with these classics is a new wave of musical theatre. Popular movies such as Dirty Dancing and Billy Elliot have been successfully translated from screen to the stage and are designed to appeal to mainstream audiences. The latest of these musicals is the fun spirited Sister Act that had its world premiere at London’s Palladium Theatre in June 2009.

Sister Act is a divine musical comedy about the power of sisterhood. It follows lounge singer Deloris Van Cartier, who by accident witnesses a murder and is put into a police protection program. To keep her from harm, she is relocated to a place where nobody will think to look for her… a convent! Assuming the alias of Sister Mary Clarence, the fun begins in seeing Deloris embrace this foreign and new way of life, slowly forming friendships with the nuns. Not only does she nearly blow her cover when she transforms the choir with her unique musical style, but she also discovers the real power of sisterhood.

If you ask me, what I remember most about the movie Sister Act, which first screened 16 years ago, it would have to be Hollywood superstar Whoopi Goldberg dressed as a nun on the run. Whoopi was the key ingredient that made Sister Act a blockbuster hit. I wondered how the creative team would be able to replicate the magic of Whoopi on stage? Firstly, they invited her to assume the role of producer of Sister Act The Musical, and gave her creative involvement in the show. Secondly, they found an amazing talent in American Patina Miller who brings to life on stage the character of Deloris/Sister Mary Clarence with her own unique strength and youthful vitality. Patina’s vibrant stage presence, essential comedic timing and diva gospel voice, deliver a captivating and believable performance whether as a lounge singer or a nun in disguise.

Adding to the dramatic impact of this musical are the magnificent sets designed by Klara Zieglerova. The stage morphs from a nightclub to a convent and church. The audience were in awe and amazement of the oversized floor to ceiling statue of Mother Mary surrounded by technicolour stained glass windows. This combined with the retro razzle dazzle of Anthony Van Laast’s choreography of 18 nuns in a chorus line, singing and kicking up their heels in their glitzy colourful habits is a memorable sight to behold!

Driving the storyline is the music of eight time Academy Award winning composer Alan Menken. In conjunction with lyricist Glenn Slater they have developed a collection of 70’s inspired ballads, jazz, gospel and disco songs which are performed on stage by a wonderfully talented cast.

Sister Act the Musical is a testament that blockbuster movies can have a life beyond the screen. With its West End season only in its infancy, Sister Act has the right combination of talent, musicality and creativity to attract audience praise.