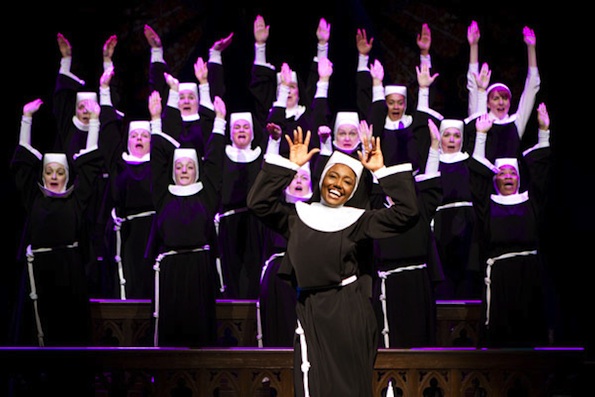 Following seasons in London and on Broadway, Sister Act: The Musical has embarked on a national tour, which recently visited Atlanta for a weeklong engagement. On opening night on Tuesday, April 23, The Fox Theatre had a decent-sized crowd and lots of energy. However, even with the cheerful and responsive air, Sister Act fell short and exposed a myriad of both thematic and technical flaws.

Based on the 1992 film starring Whoopi Goldberg (who is notably a producer of the current musical), this stage rendition strays from its source, transporting the story from early-90’s California to late-70’s Philadelphia and adding characters and occasional vulgarity where they wasn’t any before.

The story revolves around struggling disco singer Deloris Van Cartier who is forced to seek sanctuary in a convent after seeing her criminal boyfriend commit murder. Van Cartier, played by performer Ta’Rea Campbell, has to act like a nun and in the process begins to respect and care for her Catholic sisters. During her stay, Van Cartier also begins to revive the convent’s chorus, which in turn helps keep the dying church from being bought by a couple of bachelor antique dealers.

While holding onto the same skeleton of the film – the subjects of family, acceptance, redemption and transformation – the stage show still takes liberal leaps and bounds away from the original story by adding multitudes of witty zingers, abounding sexual innuendoes and somewhat excessive exaggerations. Not being Catholic, I had to wonder whether Catholics, and specifically nuns, would find the musical just plain offensive. 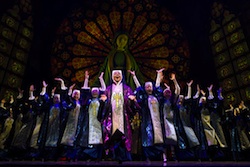 Patina Miller and the company perform in ‘Sister Act’. Photo by Joan Marcus.

Some examples of how the plot points became murky, and honestly, a little too satirical, are best exemplified in the moments shared between Van Cartier and the uptight Philadelphia Mother Superior, played by Hollis Resnik. Numerous times Van Cartier exhibits plain and unapologetic blasphemy, saying things like “Jesus Frickin’ Christ”, and promotes disrespectful, cheeky whips against the church, ending the show by saying something to the effect of, “Maybe one day you’ll realize humans are responsible for the good in the world, not God.” Mother Superior is not much better, playing the stereotypical uptight nun with the “log” in her own eye. She is constantly belittling Van Cartier and casting passive aggressive insults her way.

Yet, even with all these botched narratives, the musical did have many satisfying moments thanks to top-notch singers (namely Campbell as Van Cartier and Lael Van Keuren as Sister Mary Robert), Anthony Van Laast’s delightful and fun choreography, and Klara Zieglerova’s beautiful set paired with Natasha Katz’s dazzling lighting.

The music was light and catchy, with the Abba-like Sunday Morning Fever and the ear tickling Take Me to Heaven standing out. The balled of Sister Mary Robert, The Life I Never Led, felt forced and somewhat misplaced while the charming and wonderfully executed I Could Be That Guy, sung by character “Sweaty” Eddie Souther (performed by E. Clayton Cornelious), felt entirely authentic, natural and smooth. My personal favorite was the electrifying Raise Your Voice near the end of Act I.

Overall, Director Jerry Zaks did deliver a superb group of vocalists, actors and dancers, if only the script they performed had been more thoughtfully written. At about 2 1/2 hours total, Sister Act is one musical that could use some “divine intervention” along with some common sense and respect. As one reviewer commented, in one tune’s time the musical can shift from “sacred to profane and back again many times over.” Still, I can’t dismiss the clearly successful points either – the set, the singing, the costumes and the cutesy choreography – for that would just be “sinful”.

Photo (top): Patina Miller and the Company in Sister Act: The Musical. Photo by Joan Marcus.