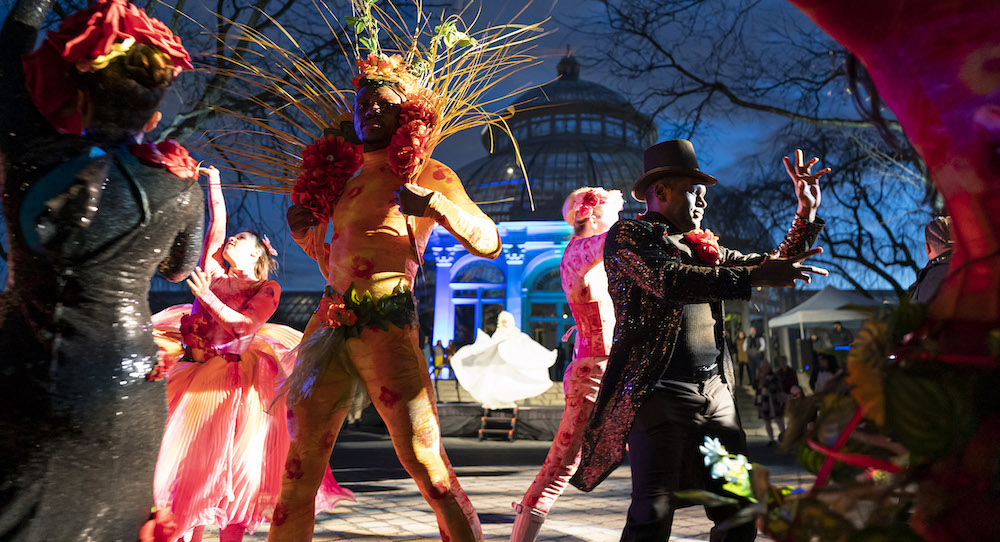 The NY Dance and Performance Awards, the Bessies, New York City’s premier dance awards honoring outstanding creative work in the field, announced tonight the 2022 award recipients at the 38th annual Bessie Awards. Porshia A. Derival, Executive Director of H+ | TOTEM Productions, hosted this year’s event, which was held at Chelsea Factory. A complete list of the 2022 awards follows below.

Derival welcomed artists and supporters of the New York dance community who gathered to celebrate the nominees and awardees. Bessie Awards were presented to artists for outstanding choreographer/creator, performer, sound design/music composition, visual design, outstanding revival, and breakout choreographer—an award that honors an artist who has made an exceptional leap in their career this past year. All of the awardees and nominated artists in these categories received a $500 honorarium, courtesy of a grant from the Doris Duke Charitable Foundation.

Tatiana Desardouin was honored with the 2022 Juried Bessie Award, which recognizes a choreographer who exhibits some of the most interesting and exciting ideas in dance in New York City today, and whose work deserves to be seen more outside the city. The award comes with touring support and other engagement opportunities from New York State DanceForce. The 2022 Bessies Jury of three acclaimed choreographers, LaTasha Barnes, Molissa Fenley, and Abby Zbikowski, selected Desardouin.

Emily L. Waters, a senior program associate in the Arts and Culture program at The Andrew W. Mellon Foundation, was honored with the 2022 Bessies Angel Award for her leadership and advocacy on behalf of dance.

Two previously announced awards were also presented. Choreographer and dancer Nai-Ni Chen was posthumously honored with the 2022 Lifetime Achievement in Dance Award. Christine Jowers, founding editor of The Dance Enthusiast, received the 2022 Award for Service to the Field of Dance.

The Bessies also honored members of the dance community who passed away since the last Bessies ceremony. The In Memoriam section was presented by Sangeeta Ghosh Yesley and Paz Tanjuaquio.

THE 2022 NY DANCE AND PERFORMANCE AWARD RECIPIENTS AND CITATIONS:

Nai-Ni Chen was a force in the dance community with her unique choreographic body of work that fuses Eastern cultural forms of Chinese dance and the Western world of modern dance. Her vision of the immigrant’s journey of crossing cultures and adapting to a new home provided endless inspirations and opportunities for creative expressions that enrich the human experience.

SERVICE TO THE FIELD OF DANCE AWARD

Jowers is an example of generosity, dedication, and commitment in service to the dance field. After her career as a dancer performing in England and the U.S., Jowers devoted herself to supporting dance artists, to writing about them with respect, truth, and love. In times when dance reviews and writers are almost extinct, when publications and dance journalists are disappearing, Jowers and The Dance Enthusiast value and care about dance criticism and documenting performances. She has and continues to ignite the dance community with passion, curiosity, and conversation.

Waters is being recognized for her advocacy of dance in times when artists need it the most; for ensuring dance is brought to the table as a former professional dancer; for being a trailblazer for dance in the philanthropic setting.

Blur at Open Call at The Shed

Intimate, vulnerable, bold, and enigmatic, this visceral piece is a quiet merging of Cuyjet’s inner worlds. With sequences of highly orchestrated, improvised structures that are exacting, charged, and in the present, Cuyjet creates a vast, living landscape.

For a visionary, large-scale work incorporating around 100 dancers and a nontraditional use of space and production elements, culminating in a creation both universal and deeply personal.

Bow Echo, presented by XØ Projects Inc and The Old American Can Factory

With keen attention to detail in choreographic structures that relate to the environment, Sperber creates a visual, exciting rooftop ritual with movement invention and materials that break the conventional expectations of an audience.

Migrant Mother for Limón Dance Company at The Joyce Theater

For creating a tributary piece to the immense grief and emotional pain that migrant mothers endure. From technically complex choreography, using space and bodies to sculpt eye-catching negative and positive space, to the blended use of modern-day sound bites with music, this is a deeply somatic experience.

in Soledad Barrio & Noche Flamenca at The Joyce Theater

For stamping the fire and passion of flamenco into the heart of the observer, making everyone want to be from Spain. Barrio’s blended precision, rhythm, and expressiveness do not just move with the music, but sing back to it.

in December 8th by Kayla Farrish in collaboration with Belinda McGuire, the Eva Yaa Asantewaa Solo for Solo Showing at Gibney

For a tumble and waterfall of physicality and phrasing that at times takes one’s breath away, and at times quickens the blood. Farrish is in full control from start to finish, and is also able to offer vulnerability and heart through her performance.

in A Jamaican Battyboy in America by Arthur Avilés at Hemispheric Institute at NYU and  BAAD!

For interpreting and adding to a revival with precision, poise, and evident generosity of spirit. McKenzie Ben Rema becomes at once a channel and a generating vessel with bold and mesmerizing dancing.

in Puro Teatro by luciana achugar at The Chocolate Factory Theater

Ramos embraces achugar’s choreographic vision to create a living landscape where bodies are in the present, joyful, courageous, vulnerable, funny, connecting, and intersecting with one another. Ramos’s movements of improvised structures are exacting, highly-skilled, charged, and playful.

Choreographed and co-directed by Abigail Yager, co-directed by Jamie Scott with assistance from Diane Madden, performed by Candoco Dance Company at the Brooklyn Academy of Music

For a dynamic, fully embodied vision/revision of Trisha Brown’s Set and Reset (1983). Candoco dancers fully speak Brown’s vocabulary while also creating new ways to speak. With the fabric Brown laid out for them, the dancers create a vibrant tapestry that shimmers and moves with fluidity and grace. Beautiful and moving, the dancers leave the audience with much to rethink.

For remixing music using Bizet’s original composition with a contemporary twist. There is a seamless transition from classical to contemporary that makes the music one.

For Assembly by Rashaad Newsome at Park Avenue Armory

For an exciting multi-arts spectacle, a true celebration of African culture disseminated into current society supporting dance, music, and poetry through textiles and visual art. An impressive amalgamation of unsuspecting elements making a unified whole.

For artistry that moves the audience from spectator to fellow performer quite seamlessly, teaching about dance culture in the process. Princess Lockeroo is a multifaceted artist who has always been fully dedicated to her craft and does not miss any details in creating a full, immersive experience for her audience.

Desardouin’s “groove,” embraces the relationship of time with an individual’s true nature. Each moment becomes fully realized and progresses forward to reveal the dancer’s authentic self. Just as her “Passion Fruit Seeds” provide a sourceable root for individuals to create and sustain, she and her works are a galvanized source of inspiration and dopeness for the Street and Club dance community and everyone she encounters.