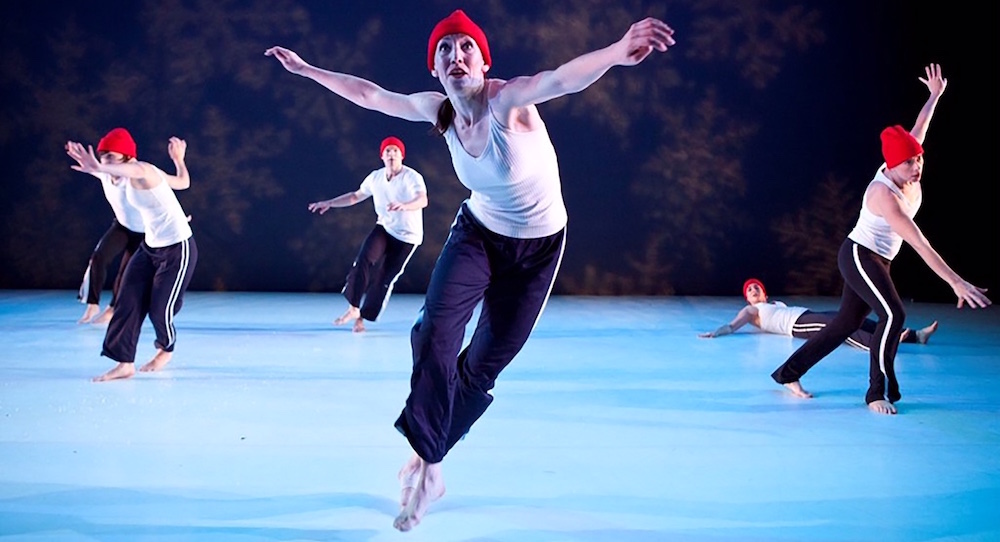 The Bang Group will present the 20th annual production of Nut/Cracked, the company’s witty and subversive take on The Nutcracker, at The Flea Theater from December 15–17. Tickets are $30 (general), $25 (artists/seniors/students) and can be purchased online here.

Delighting audiences for two decades, Nut/Cracked is The Bang Group’s beloved, witty response to The Nutcracker, conceived as a fluid dance world where genres collide and jostle one another with a genial clamor in celebration of the winter holidays. Choreographer David Parker liberates The Nutcracker from plot and tradition and seeks for it a new identity as a free-wheeling, genre-fluid vaudeville which breaks apart elements of the holiday season: surprise, anticipation, greed, community, generosity and delight, all in a series of dances drawing inspiration from all corners of the dance canon — tap riffs and en pointe ballet by way of bubble wrap, disco and Chinese takeout noodles, with modern and postmodern dance, disco, social forms and pure invention. Incorporating many incarnations of Tchaikovsky’s score, including versions by Duke Ellington and Glenn Miller, as well as the traditional orchestral suite, you’ll never watch The Nutcracker in quite the same way again!

Prior to the New York performances, Nut/Cracked will be presented at The Dance Hall in Kittery, ME (December 2–3) and at Florida Atlantic University in Boca Raton, FL (December 9–10).

The Bang Group is a rhythm-driven contemporary dance company at the intersection of percussive, classical, modern, and social dance forms to which it has added a few that didn’t exist before it made them up. Choreographer David Parker has diversified the root impulses of percussive dance embracing a full-bodied and wide-ranging vision of dance and rhythmic expression that makes room for humor, classicism, drama, and a brawny intellect.

Founded in New York City in 1995, The Bang Group has toured and performed widely throughout North America and Europe. It is presented regularly in New York City by New York Live Arts and its predecessor Dance Theater Workshop, Danspace Project, Dance Now NYC, Symphony Space, and The Harkness Dance Festival among many other venues. The Bang Group has made its second home in Boston through sustained partnerships with Summer Stages Dance (13 seasons), The ICA, and The Dance Complex. The company is also in residence annually at The Yard on Martha’s Vineyard. For 16 years its has produced the Soaking WET festival at The West End Theater on Manhattan’s Upper West Side, and it has recently become an Anchor Partner at the new Flea Theater in Manhattan. Beginning in 2015 The Bang Group has supported and presented the work of a wide range of artists through its Dance Now Boston initiative, which commissions new work created for cabaret spaces.

The Bang Group has been generously supported by The Jerome Robbins Foundation, The Frederick Loewe Foundation, the New York Department of Cultural Affairs, The Doris Duke Foundation, and many more. David Parker is a Guggenheim Fellowship recipient and has also received awards and citations from Art+Action, Dancers Responding to AIDS, the Kurt Joss Awards, and the Contemporary Choreographic Awards in the Netherlands.

The company is convinced that rhythm is the dancer’s ‘voice’ and that it can precisely evoke the vicissitudes of intimacy through counterpoint, fugue, canon and unison. At the heart of the company’s repertory is a series of duets originally made for — and sometimes still danced by — artistic directors David Parker and Jeffrey Kazin that chart romantic conflict between two men over three decades. These dances take a poetic but gimlet-eyed view of love and noise between partners who slip in and out of sync with each other and draw on all kinds of dance without a thought of movement hierarchy. Rhythm remains the organizing principle.

“We take iconic musical scores written for other instruments and dance to them. Well, not actually to them,” says Parker. “We conjure them from our very stamps, taps, claps and moves as if we’re playing them ourselves–which we are. No instruments necessary, we play them by dancing. We have even commissioned composers to write music directly for our bodies Surprisingly, dramatic encounters are kindled by the collision between narrative, rhythm and humor, which explosion we deem “Rhythm Theater.”

The Bang Group is best-known and loved for Parker’s vivid, funny and loving reimagining of The Nutcracker entitled Nut/Cracked, a comic/subversive, neo-vaudevillian show now celebrating its 20th Season.

For more information about The Bang Group, visit www.thebanggroup.com.