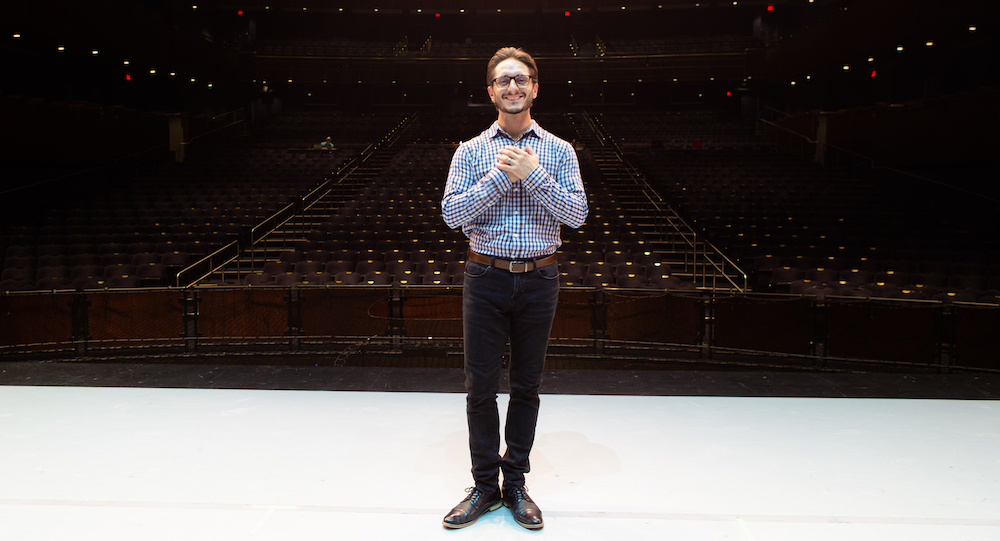 Despite his temporary title of Acting Artistic Director since the beginning of this year, and his previous role as Rehearsal Director during the pandemic, Ryan Jolicoeur-Nye has now officially been named Artistic Director of Oklahoma City Ballet. He took time to share with us his vision for the company, as well as what being an artistic director really entails.

Will there be new responsibilities with the official title, or any changes you’d now like to implement?

“When I first started in the role of Acting Artistic Director, I was down two Rehearsal Directors. I had to put on a full-length Sleeping Beauty myself. So, I guess the big difference is I was able to hire staff; having a team makes it a lot easier. And I find now with the official appointment, I can – rather than just keeping the ship afloat – make some long- and short-term goals and work toward a larger vision.”

What is that larger vision?

“I think in our case (because we’re in Oklahoma City), while there is a huge appreciation for dance and the company has a tremendous amount of support, there’s not an ecosystem of dance that exists outside of Oklahoma City Ballet. Whereas one might find that in New York and Chicago, which would allow for various niche companies – you would have Luna Negra and Hubbard Street and Joffrey Ballet and all these with their own repertoire and identity. In Oklahoma City, because we are largely the authority on professional dance, we have to represent a larger repertoire. We have to be the company that can do full-length ballets, and also do more contemporary, innovative work. That’s exciting for our artists; it keeps them engaged and fed. It also attracts a diversity of artists with versatility in their skillsets.”

As a touchstone for the community as to what dance is, you want to represent as much of it as possible.

“Yes, exactly, and I think for a long-term vision, that’s the direction I want to continue to explore. I also would really like to explore the idea of various stages. I want to present dance not just in a proscenium theater. When we look at the education aspect, we can present dance in public libraries and schools, for youth. In smaller black box venues. We utilize our studios for in-house performances. And then, of course, on the street; I’m a big advocate for site-specific works. I think meeting the community where they’re at helps us attract a broader audience, and meet parts of our community that otherwise wouldn’t get to see dance, or even know that they like it.”

You yourself are an awarded choreographer. Speaking of versatility in dance, what styles of choreographers are you looking to commission for the company?

“I think my job as an Artistic Director here isn’t necessarily to be the resident choreographer, more as to be a supplemental choreographer. Rather than thinking about it as feeding my own artistic creativity and using the company as an outlet for that, I think of it more as giving the community what they need to see. I will continue to bring in choreographers to get that versatility. Balanchine and Robbins and Nacho Duato and Killian. I see myself as the one who fills in the gaps. I’m not foolish enough to think I could stage every classical ballet there is. I would prefer to set the ones I danced myself, rather than one I learned from a video. That way, the dancers are getting firsthand information.”

It’s fantastic to be able to bring in famous rep pieces from renowned choreographers like Balanchine and Nacho Duato. In the interest of versatility, will you bring in early career choreographers?

I do also, on a mixed rep program (aside from structuring it from an artistic standpoint) ensure opportunities for emerging choreographers that I think will really do something big one day, and offer them the platform to get started. I would typically pair that with a larger, more well-known work.

I love to bring in young talent, and to be able to say that some of their first work was set on us. But I’m also cognizant that, I think, every dancer has a bucket list of famous works that they want to perform, iconic roles that everyone wants to check off their lists. I try to find a balance of benefits for our artists, our community and for dance at large.”

After a few years now with Oklahoma City Ballet, would you say you understand the abilities of the dancers well, and know how best to use their talents? Or is there more discovery there to be done?

“I definitely have a good understanding of our dancers. I worked with them most closely during the pandemic, and our changeover last year was virtually nothing; it’s all the same artists. In terms of exploration with them, I believe strongly in investing in the dancers that you have. If you have a dancer who’s strong in classical work but not so strong in contemporary, some artistic directors may pull that dancer out and find a different dancer who can do both. And I always try to approach it with some effort on my part in attempting to help them explore the areas where they aren’t comfortable, and facilitate growth.”

This commitment to company is a reassuring approach after the recent backlash in the ballet community in response to Staatsballett Berlin’s Principal dancer audition posting. It happened following the appointment of their new Artistic Director, Christian Spuck. The ballet world has made it clear that they value investment in and a degree of loyalty to company members.

Clearly, Jolicoeur-Nye intends to lead Oklahoma City Ballet by prioritizing the interests and growth of its dancers, as well as a versatile representation of dance that fosters a greater dance ecosystem in Oklahoma.