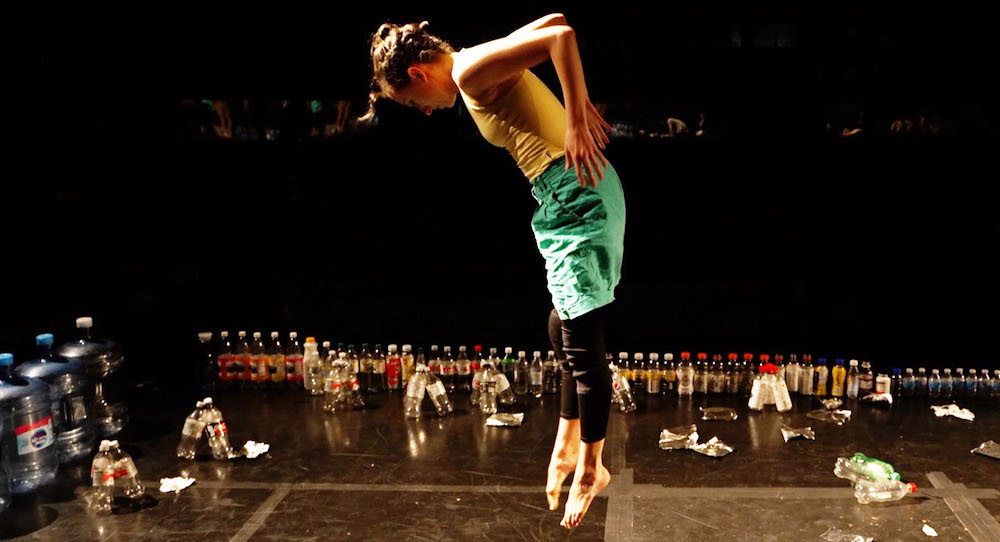 Carmen Caceres/DanceAction’s Welcome to Imagi*Nation: The Trilogy is a “choose-your-own-adventure dance theater interactive performance” that empowers audiences to “change the course of (imaginary) history.” At the center of the show is a conflict between two neighboring nations whose boundary is composed of a row of empty five-gallon water jugs, the presence of which gives the impression of there being two separate stages. Other plastic drink bottles litter the space, arranged by type, and they appear to form the borders of the nations.

Each nation is composed of three dancers, and each dancer seems to have a counterpart across the water jug border (e.g. two in power, two bourgeois or middle class, and two working class). We are told that our input will determine the outcome of Nation A and Nation 1’s relations. The message is loud and clear: our choices matter. “Let the game begin.” Life and politics are akin to a game.

Dancers in colorful (somewhat mismatched) costumes are scattered across the stage, two “royal” figures positioned on the stage’s higher tier; one dons fur and spins around in an office chair while the other proves her nobility with (the admittedly tired trope of) hands shaped into a crown above her head. A female-presenting dancer creeps around the front of the stage, seeming to spy on the action that is unfolding above.

Much of the piece is task-based. Dancers string together groupings of three cans by type, cover the tops with tin foil, pick them up and drop them off elsewhere, sometimes into trash bags. This process, which is largely facilitated by the dancers who seem to represent the working class, is ambiguous in reference, but we do get the feeling that each object and task really represents something specific to the characters.

The music is very stop-and-go, and the dancers largely remain on stage for the duration of the piece, frozen in place when they aren’t dancing. The movement vocabulary is primarily calm and angular, operating within a postmodern aesthetic, and there is moderate use of facial expression throughout the piece. Much of the choreography is coordinated, but not in unison.

Audience members on stage left belong to Nation A and those on stage right are members of Nation 1. The first genuine interactive moment (which, like the rest, is accompanied by a kind of elevator music) invites us to put foil on the stage to help make a decision: if stage left collects more foil, they steal Nation 1’s resources; if stage right ends up with more foil, borrowing occurs. Theft wins out, and the bottle wall thickens in a frantic cacophony.

Another task asks us to vote for or against continuing to build the wall. The audience opts to halt wall construction in favor of organizing resources, but somehow it seems like the dancers are defying our vote. I start to think, “Maybe my vote doesn’t actually matter,” which is not only surprising in this context — where we’ve been explicitly told that our voices really do matter — but makes me think of the helplessness that is often felt in the face of “real” political situations.

Suddenly, “E-LEC-TION!” pops up on the projector and there is a dance-off amongst the candidates. It’s a bit cheesy, but we’re rewarded by getting to cast a ballot to help decide who will lead our respective nations.

Both incumbents win the election, but then there is a fight within Nation A, a coup of sorts. Our expectations as voting members keep getting defied, which feels like a familiar story. We don’t actually have the power, which is simultaneously a compelling parallel to “real life,” but frustrating in the context of the invented world of  Imagi*Nation, which promised to be more fair. It does, however, seem like the new leadership set up involves more cooperation between the nations.

Another task invites audiences to partake in paper boat folding, but we don’t hit our quota so the nations get no healthcare. While many of the interactive elements of the piece are satisfying, I can’t help but wish that the materials seemed more relevant. Why all of these recyclables? What does folding paper have to do with healthcare? When the audience is given short answer questions to answer via QR code, our responses are briefly displayed on the projector, but the dancers do nothing with them, the genuine interactiveness of the work gradually fading out as the show progresses.

Suddenly, one of the “working class” dancers breaks through into the other nation before exiting the space down the center aisle between the pews. She then joins the dancer who was spying in the opening scene (who has since been MIA) in a seemingly “foreign land” that is displayed on the projector. Are they in exile? Meanwhile, the wall between Nations 1 and A is being creatively disassembled, and materials are rearranged on the stage. The movement of the dancers on the projector has more groove and groundedness, but also feels a bit contrived in its “tribal” energy and could be more refined.

The final interactive moment of the piece invites the audience to help “rebuild” Nation 1A (or A!?) which has apparently joined together to form one nation. Most people get up to help while the dancer who spied at the beginning frantically unfolds paper boats that are scattered between the pews, revealing letters written on them. This section feels a bit over performed and disingenuous.

There is a confrontation between the members of Nation 1A and the “foreign” dancers using the front pews––an interestingly site-specific athletic fight scene that involves some floorwork. Eventually, the papers reveal words like Senses, Ideas, Concepts and Images. It is unclear what exactly we’re supposed to make of this.

Imagi*Nation has many unique strengths; it is truly interdisciplinary and experimental, demonstrates an impressive command of storytelling through movement, and brings technology and live performance together to productively develop the piece’s narrative. It does, however, leave some questions unanswered. For one, the allusions to Spanish language including closing with a Spanish sentence are unclear. Why are we handed a Spanish pamphlet at the beginning of the piece, and what’s the relevance of including an additional language here and there? And again, what do the physical materials have to do with the ideas being put forward? The piece is almost too ambitious, but I much prefer ambition to another reiteration of the same, which Imagi*Nation certainly was not.