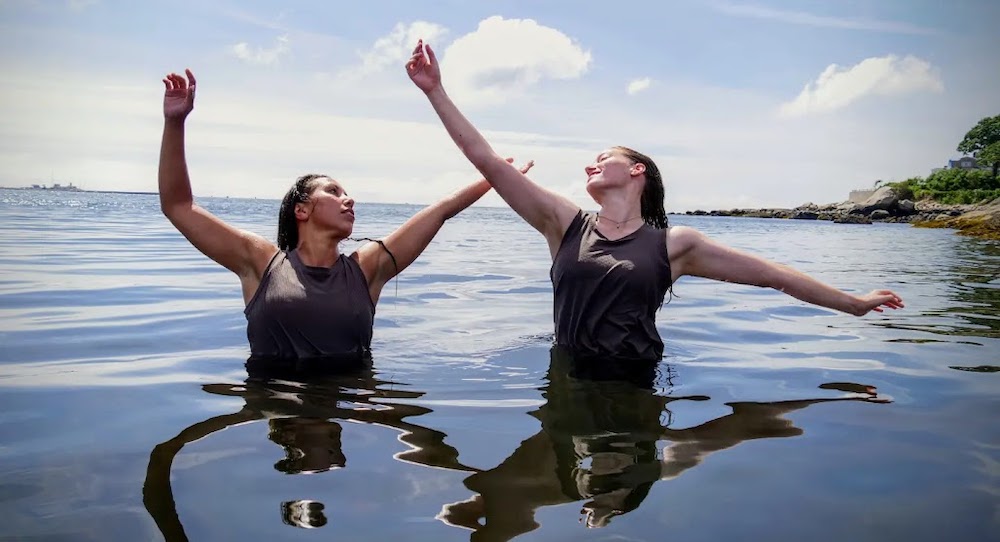 In the waning stages of the COVID-19 pandemic, the dance world – just like the world at large – is juggling many dynamics up in the air. Dance artists are exploring how to carry forward the (in many ways obligatory) deep-dives into dance film that they did over the past two-plus years. Many are also increasingly drawn to explore themes of social impact in their work — in ways that are creatively nurturing, resonant with audiences and lasting.

Liquid Spine, Cape Ann, a short environmentally-focused dance film, showed a potentially quite fruitful path forward in balancing those dynamics in particular (of the many that the dance world is currently juggling) – in social impact dance film that is both great art and effectively underscores an important message.

For one, the work kept honest human feeling at its root – yet feeling that stopped short of melodrama. For two, it worked by a pleasing “less is more” ethos – allowing what it was to be enough, shining through in its own way. It stood as an example of how dance art can move us forward, amidst all of the challenges that we face, with honesty and heart. Katie Pustizzi contributed choreography and film direction.

The film opens on two dancers – Keegan Scesny and Lonnie Anela O’kalani Neff Stanton – moving together in water. Beyond them lies rocky shoreline and towering pines – all under cloudless, infinite sky. Sometimes submerged, sometimes rising, they undulate as fluidly as the water around them.

Just as creatures more than at home in water, yet distinct from it, they are in full harmony with each other and their surroundings – but also autonomous. They embody balance between independence and connection. The score, as throughout the work, similarly brings together diverging qualities, to pleasing effect; it sharpens the emotional valence at hand, but also leaves space for viewers to color in their own lines of feeling.

A notable shift comes when they see a plastic water bottle floating toward them (mixed media art by Garbage Gal). They gaze at it, almost perplexed – reflecting an innocence towards the harm towards their world that it represents. At the same time, something protective arises from within them; they push the bottle away. Then enters a good deal more of that threatening, if mysterious substance seemingly so alien to them: another dancer (Meredith Price) caught and surrounded by plastic and other remnants of human consumption.

Price struggles to stay afloat, her motions of swimming constrained by various bottles and bags entwining her limbs. One can see here the universal and timeless struggle – and will – to survive. A net holds much of the waste on her: reminiscing ocean wildlife caught in careless human nets. She is expressionless; has she lost hope? Like a creature in a fight for its life, have all functions shut down except for those which contribute to that fight?

Slow-motion videography has me intrigued, as a creative choice. In a way, it helps build emotional resonance by allowing certain moments to linger – like a bell rung through a quiet city square.

Another chapter in this short story begins when the three dancers step unto land. Scesny and Neff Stanton support Price, walking with her on either side and holding either of her arms.

At this point, I also notice potential meaning within costumes. Neff Stanton and Scesny wear muted earth tones, in tunic-like dresses — malleable blank slates of color and feeling, malleable as they are in action and emotion throughout the work. Price, however, wears more color and definitive cuts: a force of more constant determination and resolve as the film progresses.

Resolve and determination indeed; with both brain and brawn, intellect and physical strength, she frees herself from the plastic surrounding her as she stands tall and proud on the shoreline. She sheds both weight and physical limitation. The two others stand by, in stillness but also a presence of distinct intention – acting as protectors. With a gentle, yet notable build in the score, this feels like the sort of victory (smaller or larger, all considered) that brings rays of hope. There can be small victories while there is still work to do.

In unspoken mutual understanding, the three movers join to attack that work left to do. Whereas Neff Stanton and Scesny’s personas were previously innocent onlookers, seeking understanding of something coming their way that had been so very foreign to them, a new fire of agency seems to burn in them now. That said, the performers avoid giving off anything too heavy-handed or neatly spelled-out – so viewers can’t really know the exact nature of their thoughts and feelings. That sort of mystery and abstraction can be one of the most exciting things about contemporary dance.

With that new resolve, and Price newly freed from her plastic chains, they head back into the ocean. Again joining brain and brawn, they work together to gather floating trash. Through aggregation, their efforts seem to become more than the sum of their parts. Even with their energy honed on accomplishing a concrete task, their movement remains harmonious and aqueous. They shape shift around each other, the materials they’re gathering and each other – like jellyfish but with bones to support and protect the softer structures of their physical being.

In an impactful image toward the end, the three women walk out of the ocean with the trash that they’ve gathered. To great effect, Pustizzi’s videography offers several such resonant images throughout the film. They are unified but independent, joined in mission and understanding yet also governed by no one’s will but their own. The camera then pans toward the indescribably vast sky — past sand, ocean and majestic evergreens.

Seen with certain eyes, that endless sky could hold hope; despite all that we face, are our possibilities also boundless? With honesty, authenticity and remembering that less can be so, so much more, just maybe they are. Works like Liquid Spine, Cape Ann can shine a light down such a path, a path that could be just the one we need.