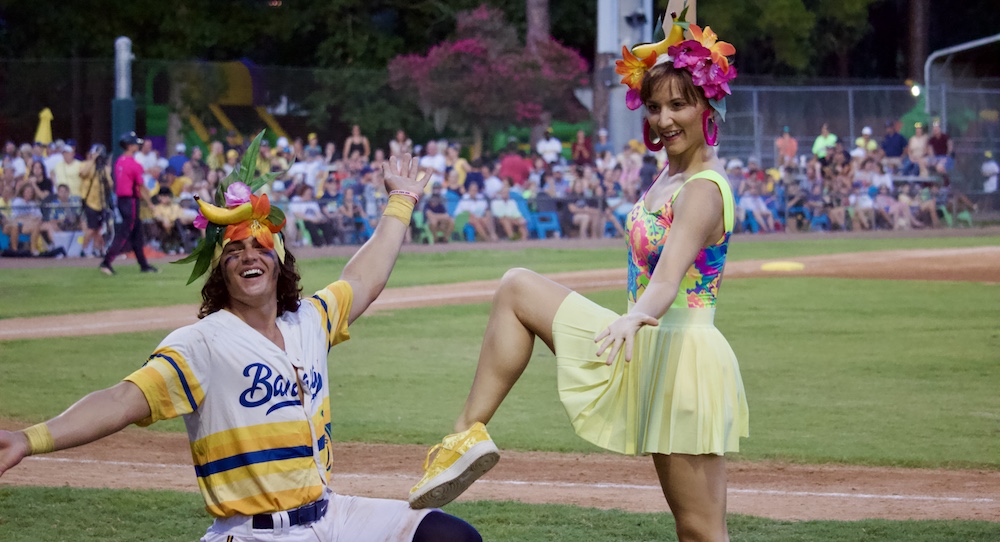 At first glance, Dance Informa seems like the last place to feature an article on a summer collegiate baseball team, but the Savannah Bananas, based in Savannah, Georgia, are more than a baseball team. Famous for their “Banana Ball” as well as their TikTok videos, Bananaland has captured the hearts of many across the nation. The Bananas’ motto is “Fans First. Entertain Always,” and attending a game at Grayson Stadium will earn you the chance to see what some attendees liken to a Broadway show.

Dance Informa had the pleasure of chatting with Zack Frongillo, Savannah Bananas’ director of entertainment. Frongillo has a dance and sports background and has been involved in the sports entertainment world for several years. He attended the University of Nevada, Las Vegas for Dance Performance and Choreography.

An opportunity with Vegas’ Golden Knights hockey team introduced Frongillo to the light of sports entertainment which ultimately led him to the Savannah Bananas. “Sports entertainment is something that not a lot of people think about, because when you go to a sporting event, you obviously are there for the sport, but that’s not necessarily the case here in Bananaland.” Many are intrigued with Banana Ball, but fans know to expect a show!

The Bananas have something for everyone: “The World’s Slowest Race” featuring crawling toddlers; The Banana Nanas, a senior dance squad; The Man-anas, dad-bod cheerleaders; The Banana Splitz, a pre-teen dance squad; and the newest addition, “Dancing with the Bananas”, a dance competition featuring six players and six ballerinas from Savannah Ballet Theatre. Not only are there opportunities for fan involvement but also significant participation from the players.

The team is constantly brainstorming ways to “Entertain Always.” “Jesse (Bananas’ owner) and I will do idea sessions,” Frongillo says. “We used to generate 10 ideas a day, but that’s changed, and we now have OTT meetings – Over the Top moments – these are the moments throughout the game that really show off what makes us different. We ask, ‘What are people going to see at a baseball game that they’ve never seen before?’… an OTT moment.”

The Savannah Bananas are passionate and motivated to connect with fans and provide special moments for them in the park. “The big thing for us is we break down the barrier between player and fans,” Frongillo explains. “We have guys who go up in the crowd every game and hand a rose to a little girl. We send players into the crowd to shake military servicemen/veterans’ hands. Everything that we do is very intentional. Also, the buy-in from our guys is unmatched. We have players doing full choreographed dances on the field.”

A baseball tryout incorporating TikTok and dancing wouldn’t make sense to the seasoned baseball fan, but much of the Savannah Bananas’ fame has come from their social media presence. When asked which videos stood out to Frongillo, he mentioned their 3-2-2 videos. “The 3-2-2 is a moment during Banana Ball, third inning, second batter, second pitch. This moment has got us over 100 million views on TikTok alone – over a couple of different videos. The pitcher, short stop, second baseman and catcher all do a choreographed dance right before a pitch. They do the dance, and then he goes directly into a pitch.”

First Base Coach Maceo Harrison is not only coach but also choreographer for most of the Bananas’ dances. “We have the world’s only and greatest dancing first base coach,” Frongillo shares. “He joined us in 2018, and is fantastic. He dances the third, fourth and seventh inning of every game, and choreographs all the player dances – a staple in our game.”

Dance Informa readers may especially enjoy the Savannah Bananas’ ballet-dancing first base coach video, starring Frongillo! “One of the more viral videos on our TikTok was the ballet dancing first baseman, and that one was me. Maceo had told us earlier in the year that he couldn’t be at this game. We weren’t able to find a replacement, so I hopped out there. The video went crazy, and that, in turn, brought me back to Savannah Ballet Theatre, and now I’m dancing professionally again.”

The Bananas have struck a chord with people of all ages, not just baseball lovers but the general public, too. When asked what they credit for their success, Frongillo shares, “It starts at the top. Jesse is with the fans all the time. There’s no other owner in the country who’s so in touch with the fans. We are also a very close front office – our Fans First Director does a great job bringing in people. You could have all the accolades in the world, but if you don’t fit our culture, the ‘Fans First, Entertain Always’ mentality, you’ll never fit in here. It starts there and then it’s living, breathing, always being Fans First.”

From getting rid of advertisements in the park, to providing $20 all-you-can-eat tickets, to the creation of fast-paced Banana Ball, every decision the Savannah Bananas makes is filtered through their Fans First, Entertain Always mission. And it’s paying off – the waiting list for tickets is over 60,000 names! For those unable to get tickets, ESPN+ is releasing a six-episode documentary, Bananaland, this summer.

Next year, the Savannah Bananas World Tour is planning to travel to even more cities to meet the high demand for Banana Ball. Keep an eye out, as they may play near you!