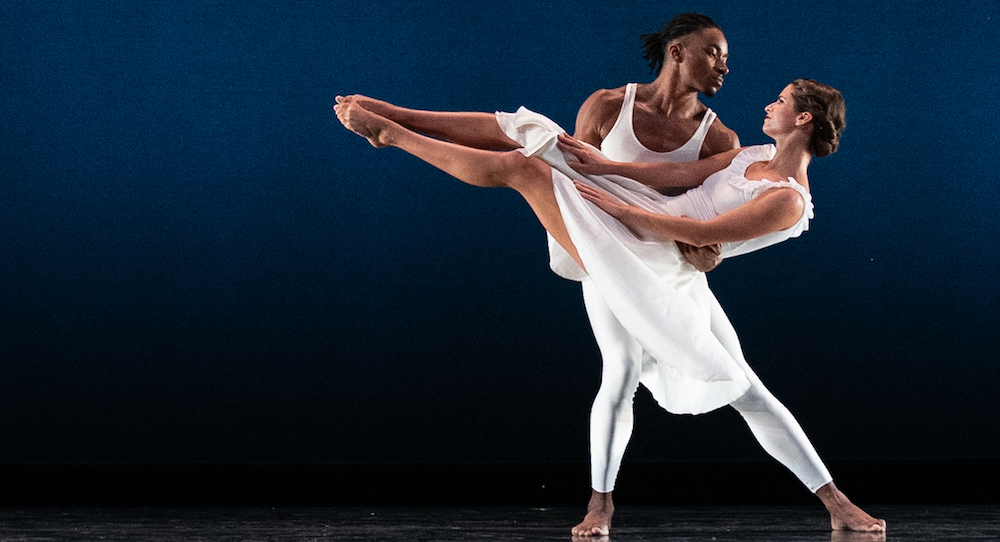 What is live art for, anyway: for entertainment, for catharsis, for provocation to action, for stirring thought, for human connection, for social progress? All of the above, none of the above, or a mix of all of the above that varies at separate points? These are the questions of many philosophers throughout history, but they are also considerations of those who create art today – leadership who makes programming decisions as well as artists themselves. Even audience members might have a richer experience by thinking on the purpose and function of the art at hand as they experience it.

Paul Taylor Dance Company’s recent run at The Joyce offered a wide array of works that demonstrated a true breadth of what live art can be, do, and offer: works all quite different and valuable in their own ways. Contemporary works in the program presented bold and earnest offerings, while Paul Taylor’s work stood strong – as always – in its straightforward poetry and timeless honesty. As such, the company demonstrated a commitment to preserving Taylor’s legacy, but also being part of moving dance forward through the 21st century.

The world premiere of Michelle Manzanales’ thoughtful, immensely pleasing Hope Is the Thing With Feathers kicked off the program. It began and ended with a single dancer in a spotlight (lighting by Christopher Chambers), arching back deeply until they fell with a clear thud: overcome by the light, overcome by other forces or simply demonstrating the beauty of what the human body can do? That was for each audience member to decide for themselves (if they wanted to go beyond simply enjoying what was visually and energetically at hand, of course).

In the interregnum, the large ensemble danced through the world that the piece brought to life: doing so through their movement, in lighting and in the separate scores. That world was at times bright, and at other times more somber and reflective. Lifts, leaps and gestures brought to mind the free flight and mobility of birds.

A section toward the end even had the dancers moving through twitchy, bird-like movements while they stood in a clump – all in canon or in more complex timing structures. Like a group of birds roosting and feeding, there was an organization here even it was not at first obvious to the human mind and eye. Not to mention that many of the songs described birds, including a cover of The Beatles’ “Black Bird” and Bob Marley’s “Three Little Birds”.

Some art aficionados might see all of that as a bit literal and heavy-handed. Yet, to me, Manzanales had a clear vision – and then executed it in a way that did offer audience members enough openness and abstraction to come away with their own experience of the work.

Some sections were less in that bird imagery and more pedestrian, plain and simple – such as the easeful step-touching footwork, and the spine naturally following its path, toward the beginning (and which also boomeranged back toward the end). It made all the clearer that straightforward elements of rhythm and movement – intriguing timing patterns, on-point musicality and clean unison movement of a large group – can be just as, if not more, thrilling than the most virtuosic and athletic movement.

All in all, it was one of those works that made me want to talk to the choreographer about her inspiration; did she perhaps observe birds – their vibrancy, their ease in the actions of survival, their freedom in flight – and feel inspired to put all of that on human bodies? To me, she did just that – and in so doing created something beautiful and satisfying, yet which could also remind audience members to not disconnect from (and to certainly avoid harming) nature’s timeless wisdom and beautifully ordered chaos. In that just might be hope.

The ensemble, for their part, performed the piece’s wide-ranging tones, qualities, and movement vocabularies just as smoothly and gracefully as birds gliding on a gentle wind – fully in their element and absorbed in the fullness of the moment. All of that allowed them to move with natural ease and freedom – and made me want to fly with them.

Following that was another world premiere, Peter Chu’s A Call for Softer Landings – full of daring risks and evincing a hungry desire to experiment. The piece was certainly a journey to experience, and not always the most pleasing – in a sensory and aesthetic manner. It called on audience members to be open to something mysterious, something provocative, something challenging.

That can be an important function of contemporary art – although artists must of course ensure that they’re venturing into that territory to serve the work at hand and to push the field forward. If it’s solely for ego or for personal creative exploration, that can be accomplished in the studio.

Right from lights up, quirky, off-beat movement complemented a grey aesthetic to begin building something quite mysterious, even haunting (lighting by Chrisopher Chambers, costuming by Clarion Overmoyer). The work shifted beyond the simply visual and energetic soon enough; one of the dancers spoke about this being “paradise” and allowing yourself to be yourself – even leading the audience members in repeating statements of liberation from arbitrary constraints. The call from the piece here seemed to be “we’re weird; you should get weird, too, why not?”

Then came encouragement to breathe: “inhale, exhale.” And later in the work, the sound of deep breath – smooth inhale, fully exhale – came into the work’s layered soundscape (including scores, speech and other sounds, with sound design by Daniel Moses Schreier).

Even later, this sound of deep breath was juxtaposed with sounds of distress. That seemed to be an effective and artistically refined way to convey the idea of smooth, deep breathing, and ways it can be implemented to improve our moment-to-moment to experience – a showing rather than telling, if you will. What was also interesting to me was the directness of the idea of the breath when so much else in the work was so unpredictable and enigmatic – as if Chu wanted to challenge the thinking of audience members in many areas, but for some reason wanted to make the idea of breath unquestionably clear.

Other choices seemed intent in shocking the audience’s senses – such as how a row of bright lights on the back wall of the stagespace shined bright enough for me to want my sunglasses. I wasn’t sure of the purpose of this choice – yet when there’s something I don’t understand, I do typically trust that artists have their reasons for what they choose. Provocation – to feel, to think, to be shocked out of the roteness of our modern lives – also certainly has its place in art.

In terms of movement, some of it called upon classical contemporary technique, and some seemed similarly intent on shocking and provoking – thrashing with gutteral vocalizations, for example. Some of the movement simply defied the rules of classical technique: internal rotation, sickled feet, inversions of how dancers seemed to be using breath. This quirky movement might have been my favorite aspect of the piece, with all of its unconventional choices and possibilities. It very much served what it seemed Chu was trying to create.

Structurally, the work was unpredictable and frenetic. Through remarkable performance within that unpredictable structure, the dancers demonstrated notable virtuosity; I was acutely aware that these dancers also perform some of the most classic of classic modern dance works, and would do so next in the piece.

Overall, the work was experimental – and that very much has its place. That’s how we break barriers and move dance forward. It takes courage from artists to take those sorts of risks. It also takes patience and an open mind on the part of audience members, because it really can be a journey. We have to be open to having our senses grated and our expectations shaken – because underneath that, there may very well be some true gems of wisdom or perspectives that we could really do well to hear. On that level, Chu’s work is on the whole well-constructed. Yet, I would call its general genre an acquired taste.

Then came a classic Taylor work, Aureole (1962) – something quite different from the preceding work. It’s full of brightness: white costumes, vivid lighting, a joyful classical score (from Handel). In that sense, it’s very similar to Taylor’s opus Esplanade – with simple jumps, runs and formations meeting the vibrancy of the classical score, and through that creating something to lift the heart and soul. Yet, this work seemed to me to have more technical movement vocabulary, and also sections with a more reflective and bittersweet atmosphere than Esplanade.

The work additionally made clear Taylor’s distinct style, springing from his unique history as an athletic youth who only started dancing in college: natural feet, pedestrian movement cleverly shaped into rhythm and in formation, occasional movement vocabulary calling upon physical risks and smart leveraging of physical strength.

Taylor’s unique mastery was blending all of that with his poetic sensibility, to create the works that we continue to know and love today. Interestingly, this rather classic modern dance work was the one in the program that got a standing ovation. Granted, that might have been more about it being the last work of the afternoon – the “standing o” then being more about praising the whole program – than about this last work being the favorite. That said, I did wonder if the more classic work resonated with this audience more.

Yet, each piece, with all of its unique offerings, had its own distinct purposes and offerings. Thank you to Paul Taylor Dance Company who, by platforming various artists along with works in the canon of the company’s founder, allowed such varied gifts of art to shine through for all who came to it.