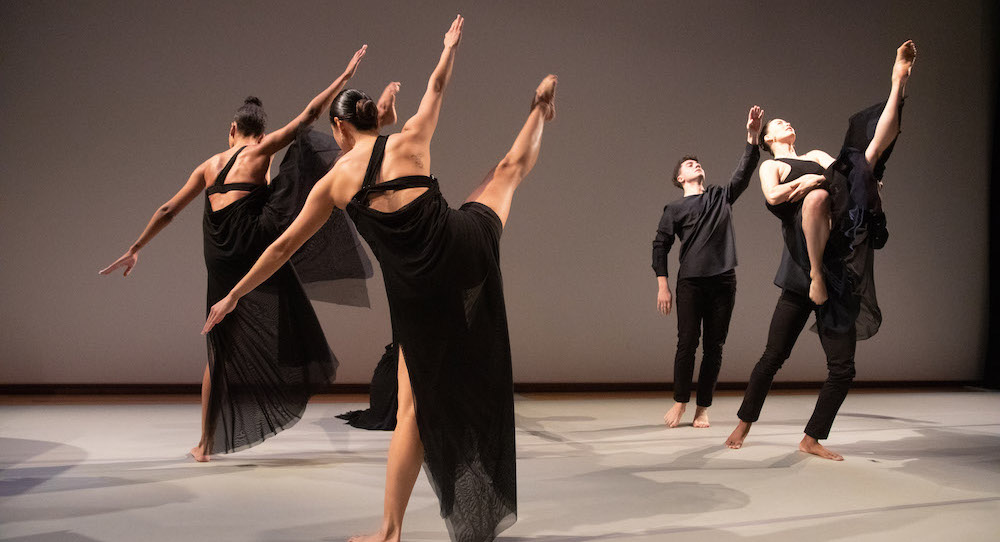 People marching together, signs in hand and chants coming deep from their belly: these are the kinetic imprints of social movements, the movements that have helped shape the world that we know today. Sometimes the moments that have driven change were held in quieter messages and actions. Either way, behind these movements and moments have been people — humans with gifts, flaws, hopes, visions and a whole lot of conviction.

Dana Tai Soon Burgess Dance Company (DTSBDC)’s Struggle for Justice video series illustrates these individuals through movement, from the inspiration of these individuals illustrated in visual art portrait form. Founding Artistic Director Dana Tai Soon Burgess is the first-ever Choreographer-in-Residence at Washington, D.C.’s National Portrait Gallery. The company’s Struggle for Justice video series has presented a new video each month since March 2022 – each featuring a different individual portrayed in the museum, one who has had a notable impact in a social justice movement (from civil rights to LGBTQ equality to labor organizing and more).

Each video memorably captures the essence of each individual, and also elements of the struggle for change in which they fought, in dance art form. Enhancing that capturing is Burgess’ unique capacity to create atmosphere, as well the dancers’ enthralling blend of truthful emotional investment with technical mastery.

The film on labor leaders Dolores Huerta and Cesar Chavez, released in July 2021, brings cultural and historical authenticity together with dance to paint a picture of these seminal labor organizers as full people. It starts with background on these individuals and analysis of their portraits in the Portrait Gallery, in written form. This is meaningful contextualization of both aspects, and – not to be underappreciated – the film offers viewers enough time to read it!

The film then shifts to video of crops and striking migrant farmers, which grounds the work to come in a sensory connection with history (videography and film editing from Kelly Colburn). Then, we see central characters, danced by Joan Ayap and Felipe Oyarzun Moltedo. Several costume changes throughout the short film – from traditional Mexican dress to Western culture formal attire to jeans and t-shirts – has me thinking of the phrase “we contain multitudes”; we all have several parts of ourselves, and that’s (arguably) even more so the case for those who walk cultural tightropes.

Further reflecting that balancing of several forces, choreography interweaves Latin dance footwork with Burgess’ signature expansive pathways, inversions, gaze and emotive gestures. A score of traditional Mariachi music, however, further grounds these characters in their heritage. They dance in a vineyard, under boundless skies. The flora and soil all around reflects a dry West Coast ecosystem.

These are the spaces of these individuals’ mission, the spaces of migrant farm workers for those full dignity and well-being they fought. That further brings these historical figures to life, making their work more visceral and vivid. Also evident is mutual admiration and kinesthetic understanding between the two dancers – nothing over the top, just clear and full of ease. Just as poignant are moments when they simply stand: not “dancing”, per-se, but being in their full presence. The fullness of their humanity truly shines through in those moments, as much as it remains clear throughout.

A film of actor and LGBTQ equality activist Dustin Lance Black, released in December 2021, offers the same contextualizing of the individual’s portrait and the person’s life (again shared slowly enough to read, I was grateful for!). Passion, intimacy and thoughtful design within the film create a striking felt sense of Lance Black’s work and life. It’s structured in two same-sex duets, with the pairs dancing separately from one another in the space but with an energetic connection through proximity. Christian Arthur, Ian Ceccarelli, Christine Doyle and Felipe Oyarzun Moltedo danced the work.

Simple gestures, such as touching palm to palm, lead into other gestures and movement, as well as fresh partnering. I reflect on the depth of “palm to palm” in our cultural consciousness, as a vivid image from Romeo and Juliet. Movement vocabulary and structuring evokes a pull toward and away, the dance of intimacy between two souls. The ensemble lays a technical foundation for this sense through their lovely lines and attuned weight sharing in partnering.

Camera work (camera from Jonathan Hsu Media and editing from Felipe Oyarzun Moltedo) enhances this feeling of toward and away, sometimes panning in on one pair and at other times taking wider shots that include both pairs. Apart from alignment with or enhancement of meaning, it’s pleasing visually to have those shifts.

Lighting (from Oyarzun Moltedo) is also evocative. Blue and pink spotlights blend in the middle like Venn diagrams. Those are traditionally “boy” and “girl” colors, yet their blending in the middle subtly points to a defiance of those binaries. There’s darkness in the space except for those spotlights – which underscores how, in many ways, LGBTQAI+ individuals have had to live in the shadows (or not live as their most authentic selves in the spaces of full light). Yet, meaningfully, there is still joy and connection in the shadows.

Also meaningful – and echoing similarly powerful moments in the film depicting Chavez and Huerta – interwoven in the dynamic movement vocabulary are soft, yet resonant moments of simply being in connection. One pair finds the intimacy of putting a head on his partner’s stomach and the partner stroking his hair, while they lay down together, for example.

The ending offers this powerfully simple and true intimacy, with the simple embrace and shifting weight back and forth of a slow dance. These choices remind me of the poignancy of something pedestrian and fully authentic – and the power of such moments experienced and represented with more inclusivity and equity, the kind that Dustin Lance Black fought for.

DTSBDC released a film on iconic actor George Takei also in December 2021. We all know him from Star Trek, but the written introduction for this film also describes his outspoken social advocacy and the importance of the representation that he embodies. His portrait at the Portrait Gallery depicts him reaching toward a vibrant butterfly, his eyes alight with childlike wonder and joy.

Burgess’ film evokes this sunny disposition, even while also illustrating the trauma in Takei’s past as one who experienced the Japanese American internment camps of World War II. As such, all was black and white in the film – except for beautifully bright and colorful butterflies (videography by Jonathon Tsu Media and videography by Kelly Colburn). The film opens with two central characters, wearing 1940s dress (costumes by Felipe Oyarzun Moltedo) and waiting with suitcases — presumably, waiting to be taken to an internment camp.

There are resonant pauses in these characters’ simple movements, which instill a somber sense and highlight the waiting and uncertainty at hand. Yet, the butterflies provide light and color. The score also reflects this meeting of the somber and hopeful; tones are high and bright, but in another way wistful and mournful (musicality direction by Kelly Southall).

It can certainly sting the heart to see that concurrence of pain and normalcy – yet, this film demonstrates how if there is light inside, we are never truly alone in the darkness. Indeed, the two central characters open suitcases and many more butterflies fly out of it and away. The vibrancy here also reminds me of the importance of art in the face of hardship (the hardship that is arguably inherent to the human condition, in some way); without it, we live without true color, texture and light.

A film depicting Rosa Parks, the seminal Civil Rights figure that we all learned about in school, premiered in February 2022. The portrait of her at the Portrait Gallery is abstract in style yet clear in message; she stands in between police officers, smaller in stature but still firm and undeterred. Felipe Oyarzun Moltedo choreographed and directed this particular film in series, rather than Tai Soon Burgess.

The film includes shots of her (danced by Jaya Bond Mitchell) on a bus, with close-ups on her hands and feet. These are simple, yet evocative moments that underscore the humanity behind the history that we’ve all learned (as this film series, as a whole, offers so wonderfully). At other points, she dances in a spotlight, reaching forward and circling, expansive yet grounded. In both kinds of footage, it seems like she just wants to keep moving forward and stand firm in her dignity.

Bond Mitchell also has a more staid, reflective presence, however: gazing slightly downwards while sitting on that bus, cupping her hands around her neck in self-exploration and deep emotion. She executes this movement as well as more athletic, technical movement with supple yet clear gaze and lines. These different types of virtuosities come together seamlessly to create the movement layer of the dance art at hand.

The individuals portrayed in DTSBDC’s Social Justice Video Series – like all of us – have had many parts to them. More deeply understanding those parts in the people who’ve shaped our history can help us to better understand our present world – and therein ultimately share a better future.

The kinetic and aesthetic force of dance art can bring our body, mind and spirit into that learning in ways that a textbook couldn’t. If nothing else, perhaps these individuals’ stories can help us to better understand ourselves. Perhaps we can simply enjoy something beautiful and true. All of these outcomes are gifts, if we can grasp them and act upon them. From there, maybe we can make our own change in the world and make history in our own ways. Just maybe!