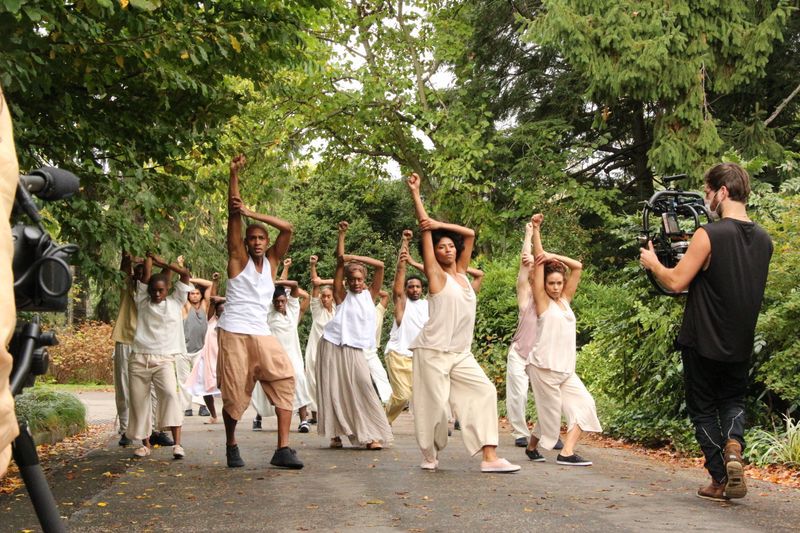 From January 11 through May 8, audiences across the country will have the opportunity to experience the extraordinary artistry of Ailey with a cornucopia of performances and programs, including two national tours — by Alvin Ailey American Dance Theater and Ailey II — as well as the nationwide broadcast of the acclaimed documentary film AILEY, with its immersive portrait of dance pioneer Alvin Ailey and the continuation of Ailey All Access, the organization’s digital programming for all audiences.

“Alvin Ailey’s vision opened the door for generations of artists to use dance to inspire, unite and enlighten,” stated Artistic Director Robert Battle. “Despite the twists and turns on the road we have all traveled together, we continue to find new ways to share artistry that renews our spirit of courage, hope, and joy. I am deeply humbled to have led this seminal Company for a decade, joined by incomparable dancers and choreographers on a journey of discovery that extends from the powerful works of our founder to the important voices of today – an ongoing dance dialogue that shines a light on the strength and resilience of our common humanity around the world.”

AILEY, director Jamila Wignot’s resonant documentary about legendary choreographer Alvin Ailey (1931-1989), opened the 36th season of PBS American Masters with a nationwide broadcast premiere on January 11. Masters: Ailey is a portrait of the trailblazing artist who founded Alvin Ailey American Dance Theater in 1958, during the Civil Rights Movement. The film traces the full contours of this brilliant and enigmatic man whose search for the truth in movement resulted in enduring choreography that centers on the Black American experience with inimitable grace and power. Told through the choreographer’s own words and featuring evocative archival footage and interviews with those close to him, Wignot’s weaves together a biography that connects Ailey’s past to our present with an intimate glimpse into the Ailey studios today, following innovative hip-hop choreographer Rennie Harris as he conceives a new dance, Lazarus, inspired by Ailey’s life.

Wignot said, “Ailey’s dances — celebrations of African American beauty and history — did more than move bodies; they opened minds. His dances were revolutionary social statements that staked a claim as powerful in his own time as in ours: Black life is central to the American story and deserves a central place in American art and on the world stage.”

Alvin Ailey American Dance Theater, America’s beloved cultural ambassador to the world, returns to stages from coast to coast on a National Tour to more than 20 cities — including Washington D.C., Atlanta, Miami, Berkeley, Boston, Chicago, Los Angeles and Newark — January 28 through May 8. Marking a decade of leading the Company forward, Battle will present Ailey’s renowned artists in a diverse repertory of premieres, new productions and Ailey classics. Highlights of tour programs include a Battle 10th Anniversary program; two world premieres adapted from video to stage, For Four by Robert Battle and Holding Space by Ailey Resident Choreographer Jamar Roberts; the return of hip hop innovator Rennie Harris’s acclaimed Lazarus; 50 Years of Cry celebrating Ailey’s beloved classic dedicated to “all Black women everywhere – especially our mothers”; and Ailey & Ellington, spotlighting cherished classics from the series of more than a dozen ballets that Alvin Ailey created celebrating the musical genius of the eminent American composer Duke Ellington. Ailey’s American masterpiece Revelations will reach all cities on the North American tour. Since its creation in 1960, Revelations has inspired generations through its powerful storytelling and soul-stirring spirituals. Full tour details will be announced later this month.

To help introduce young audiences to the magic of Ailey wherever they are, during Black History Month a virtual school-time performance will be made available to students in tour cities. Filmed at New York City Center, the educational experience moderated by Battle will welcome viewers behind the scenes to see the elements and hear from the people who create an Ailey experience. Special performances of classic works that Alvin Ailey created based upon his “blood memories” of growing up in rural Texas are featured with excerpts of Blues Suite and the must-see masterpiece Revelations.

Ailey II, merging the spirit and energy of the country’s best early-career dance talent with the passion and creative vision of outstanding emerging and established choreographers, will return to stages across the country this winter. Ailey II Artistic Director Francesca Harper, internationally renowned performer, choreographer, director, and multi-disciplinary artist, will nurture new creative voices and propel the Company forward during her inaugural season. Trained at The Ailey School (and the daughter of the late Denise Jefferson who directed The Ailey School from 1984 to 2010), Harper brings fresh perspectives to Ailey’s legacy. Program highlights from the national tour and New York City engagement March 23– April 3, are works by Battle, William Forsythe, Francesca Harper, Yannick Lebrun and Andrea Miller. Further details will be announced later this month.

“It is a privilege to return to the home that shaped me as an artist to accept the honor of leading Ailey II into its next era,” said Harper. “Ailey II’s mission lies in generating space for human narratives expressed through the strength, grace and versatility of the next generation of gifted young dancers. As exemplified in this year’s diverse repertory, I am looking forward to bringing in new choreographic voices and programming works that further an ongoing cultural dialogue and contribute to social transformation.”

Since the pandemic’s onset, Ailey has reached out to inspire people worldwide with Ailey All Access, a series of digital offerings that brought dance to nearly 46 million people in 121 countries — including free streaming of Alvin Ailey American Dance Theater repertory, original short films created by the Ailey dancers, Ailey Extension dance and fitness classes for all levels, and more. In February, Ailey All Access will return with regularly scheduled series of streaming of performances and offerings from throughout the organization.

For more information about Ailey’s performances, programs and classes, visit www.alvinailey.org. Audiences for tour performances should check with venues for COVID-19 protocols.