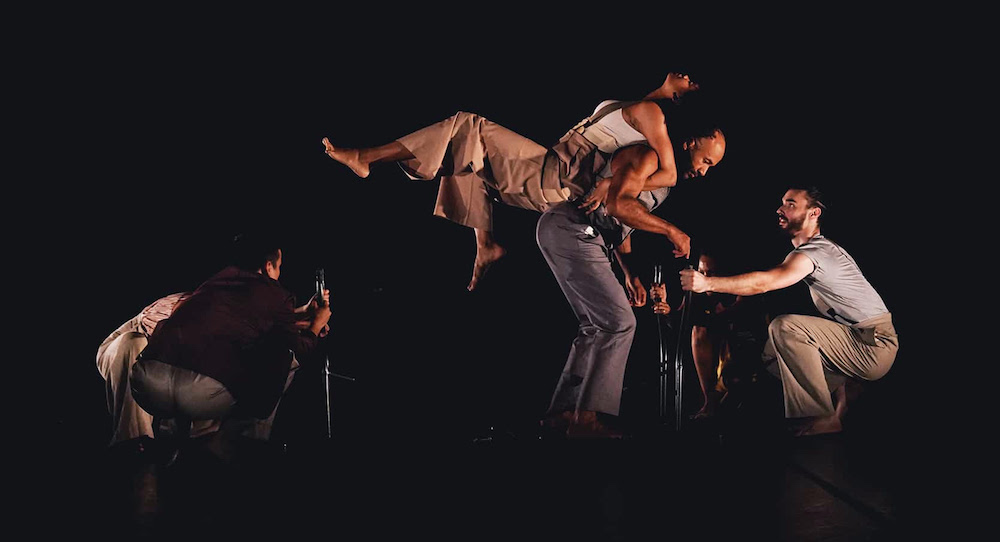 Jerome Robbins Award-winning artist Stephanie Batten Bland creates performance at the intersection of dance theater and installation, questioning contemporary and historical cultural symbolism and the complexities of human relationships in the context of social, political and racial issues. For this work, Batten Bland worked with Company SBB members in workshops to build a vernacular of movement surrounding the statuses, roles and relationships that can be situated around a table. She obtained rights to use sound clips from the film, with the iconic actors’ voices distorted across her kinetic experimentation with the film’s themes. “The Glory of Love,” the 1936 song heard across the film, is here reconceived and unsettled by composer Paul Damian Hogan.

The film’s titular dinner happens as the credits roll — with the symbol-rife act of sitting around a table concluding a fraught, day-long emotional journey. In Batten Band’s piece, the table — and the emotional and social acrobatics sited there — are physicalized. The table becomes vehicular and transportive. It takes on new meanings and forms as dancers’ relationship to it — and its impact on their relationships to one another — transform, moving and shifting in tandem with the collisions of our socially constructed perceptions and positions.

In BOMB, Batten Bland explained that Look Who’s Coming to Dinner “came about because I was feeling this need for people to come together, and yet I kept seeing reasons why people weren’t being invited. When I think of invitation, I think of the table and the statuses that the table can offer. At the dinner table in Look, we’re all seated at the same level, but the idea of who is invited to that dinner table has great meaning. I was set on exploring that and really wanted to dive into Kramer’s film, [which] spoke to so many different ways that we judge ourselves and consider how we should act within our own cultures. I think about the table in terms of whom we are going to let come to dinner [after the pandemic]. God, it better change. If we want to survive as a species, we’d better build a bigger table.”

With Look Who’s Coming to Dinner, which has been performed at Lincoln Center and La MaMa (as part of the Crossing the Line Festival), Batten Bland has extended the work the piece does beyond the stage, inviting people in the areas it’s performed to participate in dinner-themed conversations in workshops. This fall, Batten Bland, currently an Assistant Professor of Theatre and Dance at Montclair State University, is, with MSU’s College of the Arts, hosting a series of events seeking to bring to the table students in dialogue. For example, in a series of pop-up performances, student musicians will play interpretations of “The Glory of Love,” newly commissioned from jazz composers.

Performances of Look Who’s Coming to Dinner take place at the Alexander Kasser Theater in Montclair, NJ, on November 4, and November 5, at 7:30pm; November 6, at 8pm; and November 7, at 3pm. For tickets, visit www.peakperfs.org.