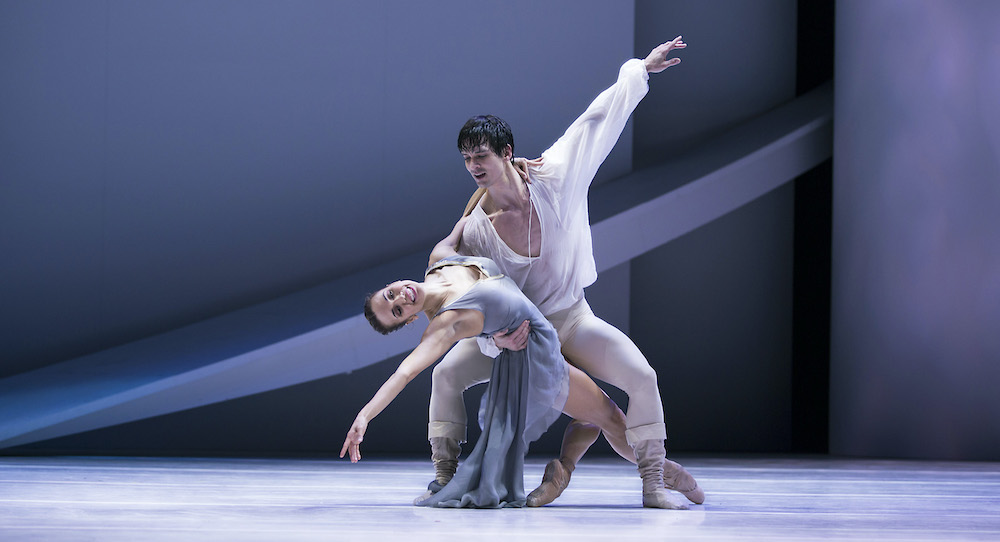 Romeo and Juliet is an infamous play known across the English speaking-world: read in high schools, performed across stages, dissected in literary scholarship. Its central element of love battling hate is a timeless and universal theme. Yet, might parts of it not speak to a world radically different than that of when it was written? How can we present it in a way that truly speaks to 21st century audiences?

Roméo et Juliette, Pacific Northwest Ballet’s program of the classic, choreographed by Jean-Christophe Maillot, revealed a path toward that end — through rich, thoughtful movement and theatricality, supported with a well-crafted aesthetic. The company’s 2008 program was reprised virtually, to keep all involved safe while still enjoying it.

Prior to the recording of the staged performance, the film program offered a video of Juliette’s (Noelani Pantastico) experience with the show, including voiceover of her describing elements of the process and how she now misses it “more than [her] heart can bear.” Her vulnerability and emotional openness could encourage audience members to keep their own hearts open to the timeless love story to come.

The staged program opened with just one dancer, yet the energy built as music (by Prokofiev, 1935-36) became more allegro and more dancers joined. The choreography was grounded in a classical foundation — yet a release into gravity’s pull, acrobatics and elements of jazz dance (through shapes, gestures and inward rotation) infused that foundation with something more eclectic and stylistically dynamic. Tension built as the energy did, and a street fight was at hand!

The minimalist set (scenic design by Ernest Pignon-Ernest), a ramp and vertical white structures that could be imagined as buildings, layered a modernist aesthetic on top of the story’s period setting. As the work proceeded, the set pieces moved — an efficient way to convey change of scenery. Costumes in light and dark shades helped identify the two feuding Capulet and Montague families (costume design by Jerome Kaplan), and, although classical in style, contributed to that modernist aesthetic through unique design elements.

The plot then brought us into Julliette’s world. Right away, we saw both the Nurse (Margaret Mullin) and Juliette’s characters shine through brilliantly. Just as in the play, the Nurse could bring a smile and a laugh. Comic relief also came through as Romeo’s (James Yoochi Moore) friends teased him; he was to be wed soon. Those dynamics felt truthful to how young male friends express caring for one another. The scene shifted into the Capulet ball — a memorable assemblage of moving formations, dancers in dark costumes (complete with strikingly unique headpieces, with masks draping down to their faces) popping out from the off-white stage.

The moment of Roméo and Juliette’s meeting soon came. Symbolic of the plot overall, those around them pulled the two apart. Juliette would have her say, however; she danced a soft yet effervescent solo, circling the room to greet all around her. Choreography for her character was understated, unhurried and full of spirals — as graceful yet multi-layered as she is.

After Roméo’s friends had their fun crashing the party and made a scene (predictably enough), Roméo and Juliette had a moment to dance together for the first time. Creating the shapes of arches and half-squares with their arms, their connection both expanded through space and seemed to seep into every part of them. Yet, of course it could not last long; commotion broke out and the party-crashing Montagues had to leave.

The infamous balcony scene came not long after, right before the first act’s curtain dropped. It was one of those times when the abstraction of the production’s aesthetic was something that viewers could fill with their own mental models of what they know of the story, shaped by the new information that this retelling offered. The passionate infatuation between the two characters, the force that fuels the plot, remained truthful and compelling (it can be easy for it all to get cliché and overblown pretty fast). Little moments added life and realism to the budding love: Juliette resisting Roméo’s kiss twice and then coming in for one herself, him drawing her to him — her resting over his legs– with nothing but his hand.

Later, Juliette met with Friar Laurence (Miles Pertl), identifiable by a black top and priest’s collar). She froze, yet he kept moving; was he pulling strings to manipulate the situation? His height and expansiveness in movement made the idea of him controlling things believable, as well. Not too long after, a rippling white object, taking different shapes from an overhead arch to a heart, connoted that Friar Laurence had married the young lovers. Unlike any other character in this production, they wore pure white, implying a purity in them true of no other character in the story.

More fighting broke out in the street again in the next scene, yet the newly-married Roméo couldn’t be angry toward his new family members, until his close friend Mercutio (Johnathon Porretta) was killed and he had to take vengeance. With remarkable realism, it all moved in slow motion, from lighting (by Dominique Drillot) to movement — as those most impactful moments of our lives can feel like. All other dancers in stillness, Roméo committed the act that got him banished from the town. The fallen’s mother danced an impassioned solo, her grief taking up space beyond her body yet its weight making her move in a powerfully jerky, pained way.

Pulling strings again, physically represented by him manipulating bodies, the Friar had Roméo come to Juliette for their wedding night before he had to leave the town. In an unexpected way, slaps denoted them quarreling — Roméo had just killed Juliette’s cousin Tybalt (Seth Orza) — yet soon enough their passion returned. Spirals and circles in the movement made me think of all the dimensionality of their love, as doomed as I knew it to be.

Just as it did throughout the work, lighting helped paint the scene and evoke the feeling at hand; the rising of bright light signified that morning had come. Roméo managed to escape before discovered, yet a new challenge was at hand for Juliette; while still married to Roméo, she was commanded to marry another that day. It was more than an issue of her loving Roméo; marrying again would defy religious law. But she couldn’t give that as a reason for not wanting to marry. Her presence was ice-cold toward the bridegroom, and with tension she and her mother circled, jabbing and pulling with their movements — a heated argument!

Juliette hatched a plan with Friar Laurence to get her out of it, their shifting back and forth in space signifying negotiation and exploration. Strikingly, the Friar and his assistants moved her upside down — moving her skirt over her face, covered as it would be on her burial. It was a powerful and memorable image. Those familiar with the Shakespeare play will remember that the plan was to use a potion that would make her appear dead for only 24 hours. Roméo would retrieve her from the catacomb (an open-air underground grave), and they could then ride away to be happily together.

The Nurse, finding Juliette “dead”, weaved and heaved through the space as if overcome and not able to control herself. Juliette’s mother (Laura Tisserand) had a similar reaction, with Tybalt being seen carried to his burial at that moment as well, reminding audience members just how much death and despair had transpired in the short time of this plot.

Yet, Roméo was overcome most of all at the belief that Juliette had died, falling to his knees in disbelief and sorrow. Those knowing the play might also remember that the Friar had sent Roméo a letter explaining the grand plan (alerting him that she was not really dead), which he didn’t receive. Juliette awakened to find Roméo dead; believing that his love was gone forever, he had taken his own life. She pulled a red scarf from his shirt, a color with so many possible rich meanings here — life, death, love. She wrapped it around her throat to choke herself. The curtain fell.

This writer has seen many iterations of this play, theatrical and balletic (and performed in one of the former), and none have had such a symbolically rich and tragic ending. Something in the vibrant color of love is what Juliette used to take her own life. Was it love that killed her? Was it love that had given her life?

The play sometimes gets critiqued as simplistic and one-dimensional as compared with many other of Shakespeare’s masterpieces. Yet, distinct and memorable creative choices within this portrayal revealed just how much depth truly is in this work, if we gaze upon it with new and curious eyes. Pacific Northwest Ballet reinvigorated Roméo and Juliette how only dance art can — with a skillful and thoughtful blend of theatricality, movement and visual elements. The result had the potential to remind us just how much new wonder can be found in old stories.