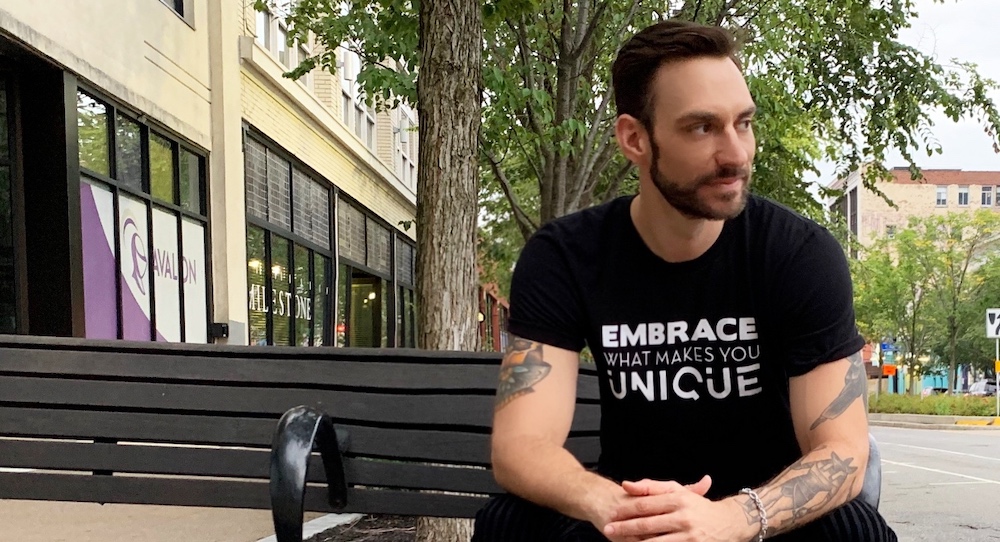 What makes you unique?

Is it a special talent of yours? Your look? Your personality?

“The world is so judgmental, and we all feel a pressure to fit into a mold,” shares Andrij “AJ” Deneka. “When you can showcase your individuality, it helps you stand out among others. It’s refreshing.”

Deneka is the founder of Embrace What Makes You UNIQUE, a fashion line and movement inspiring people to live as their authentic self. After years of dancing and modeling professionally while living in L.A., the Buffalo, NY-native is thankful for the opportunities he had but feels he could have accomplished more if he had the confidence to always be true to himself.

“From my past experience, when I wasn’t being my true authentic self, those moments weren’t as fulfilling. When I stayed true to who I am is when I felt better about myself and my accomplishments,” Deneka reveals. “We’re always going to have those moments when we feel like we didn’t fully embrace who we were, but recognizing it and having that understanding is part of the process.”

Deneka is currently a resident teacher at dance studios in Buffalo, guest choreographs for several studios throughout the United States, and is a judge for Spotlight Dance Cup and Thunderstruck Dance Competition. For several years, he noticed himself using the phrase Embrace What Makes You UNIQUE with his students, or using it as a special award at competitions. The phrase originally came to mind after he listened to a speech by one of his favorite artists, Janelle Monáe.

“One year, I choreographed an opening number and made all of the kids in the routine a pin that said Embrace What Makes You UNIQUE,” Deneka recalls. “The studio owner encouraged me to make shirts or clothing with the phrase on it and said she would buy it.”

In September 2019, Deneka, who also studied at the Fashion Institute of Technology in NYC, took her advice and launched his own fashion line, putting his token phrase on t-shirts, long sleeve shirts and hoodies. It wasn’t long before people were asking for more products, including tank tops, joggers, sweat pants, pop sockets, lawn signs and bumper stickers.

“Yes, it turned into a business, but it’s more than that to me,” Deneka says. “What excites me is the movement aspect of it. It’s something I truly do believe in.”

Although growing up he felt he had a great support system of people who encouraged him to be whoever and whatever he wanted to be, Deneka felt he lacked confidence and wish he embraced his own uniqueness sooner in life. “I feel like with teaching, it’s important for me to remind kids to be who they are, not who they think society wants them to be, because it’s not always something I did myself. I was confident to a certain extent, but it didn’t click fully until after I left L.A.”

By using the phrase in class, he feels his students have realized that by being themselves, it will help them shine at their brightest potential. “There are so many talented individuals in the world, and when you’re not truly yourself, you’re just another number,” Deneka says. “When the phrase clicks with the kids, I noticed it gives them pride for who they are, not just as dancers but as individuals. It strengthens their everyday lives.”

As he travels for teaching and judging, he sees many students afraid to be who they want to be. “Regardless of age, sex, race, political beliefs, we are all different…and that’s the point! People all over the world are being ostracized for the way they were born or for what their religion is. I luckily was brought up in a family and a studio with pretty awesome people, but not everybody has that. I feel like Embrace What Makes You UNIQUE is broad enough that everyone can relate to and hope it inspires my students, or people in general, who are struggling.”

Recently, Deneka was inspired watching a woman accept an award who discussed how we are all made up of different cells and how it is a scientific fact that we are all different and that’s how we were put onto this earth. It inspired the second phase of his line that he calls Moleculary UNIQUE.

“Reminding ‘ourcellves’ of the intrinsic beauty of our bodies highlights the blend of sameness and diversity that comprises each of us,” Deneka posted to social media when he released his new products. “So often we reduce someone to one thing. We reduce someone to a stereotype, an object, their race, their gender…but we’re not one thing. We’re many trillions of things. So, next time you want to pay someone special a compliment, just tell them, according to science, you are a magnificent molecular masterpiece.”

As you take on 2021, find your confidence, tune into your individuality, and nourish your soul to its fullest potential. Individuality never goes out of style. and you are a magnificent molecular masterpiece.

It’s time to Embrace What Makes You UNIQUE.