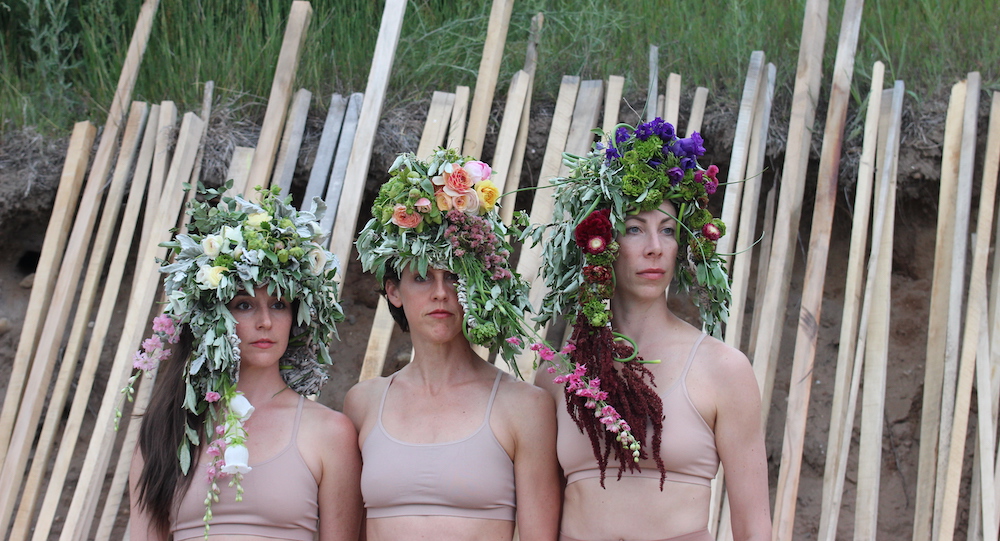 A lot can happen in 25 years — particularly in the arts; it’s a bit mind boggling to think of all of the ideas, all of the dreams, all of the rehearsal hours, and all of the blood, sweat and tears that can fit into 25 years of an arts organization. Lasting that long also evinces a persistence and a fortitude that seems to signal an ability to make it through just about anything — even a global pandemic that’s all but ground the arts sector to a crawl. Multi-city production company DANCE NOW’s 25th Anniversary Season (2020-2021) will take place virtually, with access to performances through an online platform at a low cost to viewers. Through a new platform, the company will continue to share the art of dance and all of the wonderful purposes that it can serve — all that it’s worth and all of the reasons that we need it to survive this time and stay a part of our life.

LMnO3’s POMP opens the September edition of the virtual festival. Three women (Deborah Lohse, Cori Marquis and Donnell Oakley) walk in, carrying big cardboard boxes and wearing nude undergarments. They move in precise coordination, offering a care to what they’re presenting that continues throughout the rest of the work. Their boxes open to reveal a patch of faux grass, on which they then step to dance. They reach pom-poms up as John Philip Sousa’s “Stars and Stripes” rings out, and then fold at their hips. Still carefully coordinated, they trace the pom-poms down their legs. Satirically, they go behind their bottoms and then down their legs, all slowly. One arm traces through the other leg, the three together contorting gracefully but with that edgy, sardonic feel. Finally, they raise up and gyrate their hips before forming a human triangle — defying “ladylike” norms and expectations.

The film ends with a pom-pom dropping from the top of the human triangle, and the camera panning in on it (videography by Courtney Boyd and video editing by Lohse). There’s something counter-cultural and nonchalantly daring about it all, in a very postmodern way. With that quality, combined with the patriotic score and symbolism such as the boxes branded with big consumer names (such as Amazon and Lowes), the work seems to be slyly poking holes at the idea of “American exceptionalism” — just as postmodern artists have done since the 1960s and 1970s. We face different battles now, but they’re no less dangerous. Sometimes, it’s up to artists to tell us, sometimes doing so between the lines, when it’s time to wake up and act.

Ayodele Casel’s Rooted has Casel dancing in a pared-down setting — just her, a lamp, a tap floor and the room around her (filming by Torya Beard of Original Tap House). She wears a shirt with an American flag in black and white, black jeans, and gold tap shoes. As she taps, the rhythm enticing and her virtuosity simply astounding, we hear her speak in a narrative overlay. She speaks of being rooted in the people of her life and in the communities to which she belongs — including those of her roots in Puerto Rico and Africa. She speaks of the energy, innovation, creativity and joy of these people, and her love of those things — and her people.

She roots in her steps, her physical energy nevertheless also rising up through her body — through turns, scuffs and impossibly fast sounds. This foundation in creativity and love is clear in her very body. With lightness yet steadfast strength in her carriage and movement, she embodies what she speaks. The flag on her shirt also seems not accidental to me, not in the least; embracing and supporting the multiplicity and richness of this nation and its people is embracing and supporting this nation itself. The maxim “less is more” also fills my musings as I watch her; in this room, dancing alone, she and her art are enough. Who she comes from, they are enough. She and they — they’re always connected, rooted together and always enough just as they are.

Mike Esperanza’s 10th Floor is a pleasant change of tone and style, to something more aesthetically rich rather than necessarily steeped in deep social meaning (as the past two pieces are). We see a fluffy white dog (Emma the Samoyed), and suddenly a woman in a pink tracksuit. She rings a doorbell, and then she’s up in a different space. We continue to hear the dog’s breath as she moves — snaking through her spine, lunging low, rising again to turn. Other sounds overlay, and the camera angles become increasingly fresh and unexpected. The doorbell rings, and more women in tracksuits arrive. The dog is still panting. It’s a sensory feast! Clarity of aesthetic choice seems to help it from becoming sensory overload (Esperanza to credit for the choreography, music, costumes, cinematography and film editing). Later in the work, the dancers (Tiffanie Carson, Erin Love, Katrina Muffley and Graziella Murdocca) each have moments dancing alone — leaping, twisting, turning — seemingly in slow motion. The variation in timing is another intriguing element that adds to the sensory feast.

Finally, we see the dog again, and a man (but not his face — Casey Shepard). There’s also a mental feast here in the mystery of it all; I’m so curious about what’s really going on here! The man drinks water and faces all of the women. The camera turns to them, and they’re all giving off different vibes — facial expressions, physical carriage and just feeling about them. A graphic with the name of the piece cuts it in, and it’s fin. I guess I’ll never really know, I tell myself. Yet, that’s okay; with this piece, along with the sensory melange it offers, that mystery is part of the fun. Sometimes art warns. Sometimes it uplifts. Sometimes it’s just fun. It’s always worth something.