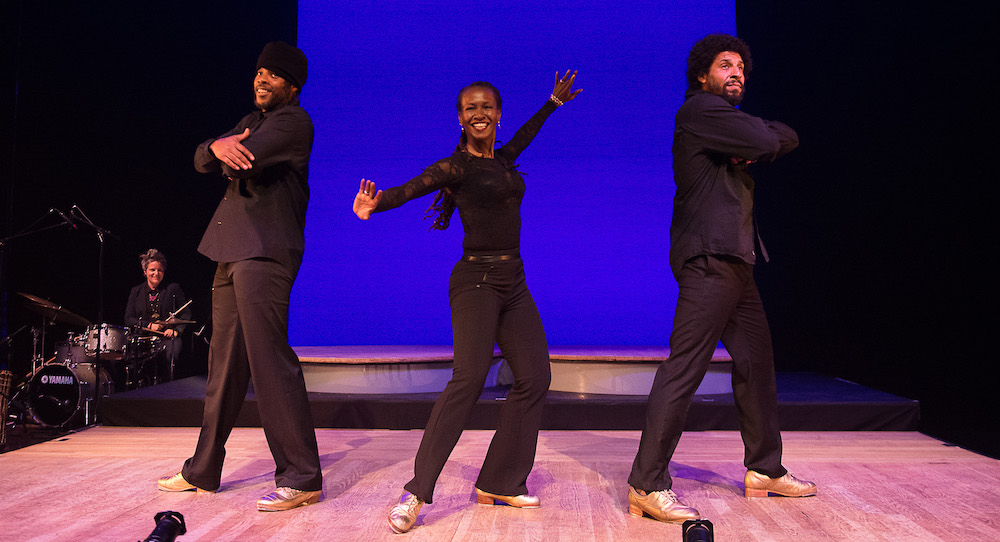 The final performance of Jacob’s Pillow’s two-month virtual Summer Festival, a festival that met the moment and satisfied real yearnings out there, was the exact right one to top the whole thing off. And still you must swing is a show full of tap (and non-tap percussive, accented dance vocabulary), something not seen yet in the festival — thus ending the festival on a note of stylistic diversity and possibility. A clear undercurrent was also the persistent presence of police brutality and racial injustice more broadly, in 2016 when the performance took the stage and today in 2020.

Ending the virtual festival with this performance seemed to affirm that we have work to do, work we must do, for our fellow artists and beyond. The dialogue around the performance made clear to me that Black artists performing in this work — Dormeshia Sumbry-Edwards, Derick K. Grant, Jason Samuels Smith and Camille A. Brown — bring the pain of these injustices to the stage, as artists and as humans. Nevertheless, they must swing. They must create, they must dance; it’s who they are.

Jacob’s Pillow Scholar-in-Residence Melanie George opens the streamed offering, discussing tap lineage and the concept of swing, a musical “lilt” imbuing all aspects of performance. “Tap has an oral lineage as much as physical one,” she affirms. George notes that the performance was filmed just days after the shooting of Philando Castile by the police. She acknowledges the trauma that these artists, all Black, experience from events of police brutality and systemic racial injustice. She contends that artists don’t have to only bring part of themselves to performing — rather, they can and should bring their full humanity to the stage. She also affirms that in this dance form, as we will see tonight, musicians aren’t simply ancillary to performance. Rather, they are central to its structure, tone, and more.

Just as she has in previous streamed Summer Festival nights, Jacob’s Pillow Director Pamela Tatge acknowledges the Indigenuous tribes on whose land we dance when we dance at Jacob’s Pillow. Then, just as George underscores the trauma that these Black artists carry with them, on and offstage, Tatge names that and notes that it was palpable that night in 2016 when this performance took place. She acknowledges the debate around police brutality, and affirms that it should no longer be a debate — rather, we must stand up for justice for all. Speaking in 2020, she also does not shy away from the fact that all of that sadly remains relevant — central to the social discourse, rather. As I sit listening to her, this feels to me like a tie between the past and the present that shouldn’t exist.

In opening credits, ”improvography” being listed along with choreography grabs my attention. For me, that underscores the central place of improvisation in this dance form. The work opens in earnest after a band brings in true big band sound, which feels impossible not to snap, stomp, and smile along with. Lights come up on three tap artists — Dormeshia, Samuels Smith and Grant. The aesthetic is clear, elegant and classy — a blue background and black costumes with gold tap shoes. The stage design, a few raised platforms and a deep blue background, is pleasantly simple — yet also somehow seems to hold the potential for many possibilities.

Like that of all accomplished tap artists, their sounds feel impossibly fast, impossibly clean and clear, and impossibly rhythmically purposeful. At times part of me does want slower moments, even pauses, to draw contrast and allow sounds to truly resonate. Yet for what it is, it is both astounding in its level of technical virtuosity and immensely joyful in its energy. They end their opening trio with a sweet moment, high fiving and then posing together. Camille A. Brown dances next, with small movements punctuated by gesture, accent, and syncopation — as if “tapping” with her very body. She embodies actions such as stirring a stew and fixing her hair, along with the musicians’ beat and tones.

A following duet with one of the tappers offers a fascinating physical and aural interplay; Brown “taps” through her movement quality and vocabulary in relationship to the tapper’s literal tapping and vice-versa. What composes the totality of this art form, this all makes me ask myself — steps, beats, qualities, the people who do it, the history and cultural context? Aesthetically, a bright red background matches bright red tones in her hair and clothing. All combined, her vibrancy leaps off the stage, right down into my bones. Dormeshia dances solo next, with an ease, cool and energetic lift through her body — even as she grounds through her legs and feet. She makes something exceedingly difficult look like literally no sweat. That’s a cliche in dance, but she epitomizes it.

The three tappers next have individual solos as the two others sit behind them. This is call and response, paying homage to this fundamental element of tap tradition. Their qualities are all slightly different if you as a viewer are truly paying attention: different carriage, different clarity of sounds, different timing. Then comes a calmer, arguably more somber moment, with one of the dancers in blue shadow and moving with a bit more weightedness and bluesy-ness. This section shows another side to tap, in all that it can be — which feels both instructive and enjoyable.

A following swing dance section pays tribute to this part of the Black artistic contribution — one that’s central to American pop culture. It also demonstrates the multi-talented nature of these artists; they’re as smooth and flawless in swing as they are tapping. In another endearing ending to a section, this one a bit tongue-in-cheek, they fall as if in exhausted as the lights go out. Following that Brown is back, syncopating and articulating in conversation with the music, with dynamic hip-hop vocabulary and moving as — arguably — only her body truly can.

The three tappers are then back, bringing more joy and technical excellence. A long musical interlude follows, making clear that this is partly a musical performance, to which Scholar-in-Residence Melanie George alludes — and that’s fully fine by me! The music is engaging, entertaining, and infectiously joyful. A tour-de-force of virtuosity as a solo comes next, the soloist looking dapper in a suit and the stage glowing gold. The next tapping section, following another musical interlude, is the trio back again, in shirts saying “and still you must swing.” Brown joins them after a while, dancing along with their taps, them alternating and her following whoever was tapping. Her tapping without taps, this section brings back that “meta” commentary of the nature of tap.

They bow together, and — the performance concluded — I think about how these dancers just have to swing, global injustice in the background or not. George Balanchine famously said “I need dancers who don’t just want to dance, but need to dance.” The heart, soul, and passion of these artists makes me think that these dancers need to dance; and still they must swing. Perhaps they can find healing in dance, perhaps not. No matter what, they bring their full selves to the work. Still, Jacob’s Pillow must share the art, tradition, and scholarship of dance, global pandemic or not — with inventiveness, adaptability, and a positive spirit. I give thanks, standing in admiration and solidarity.