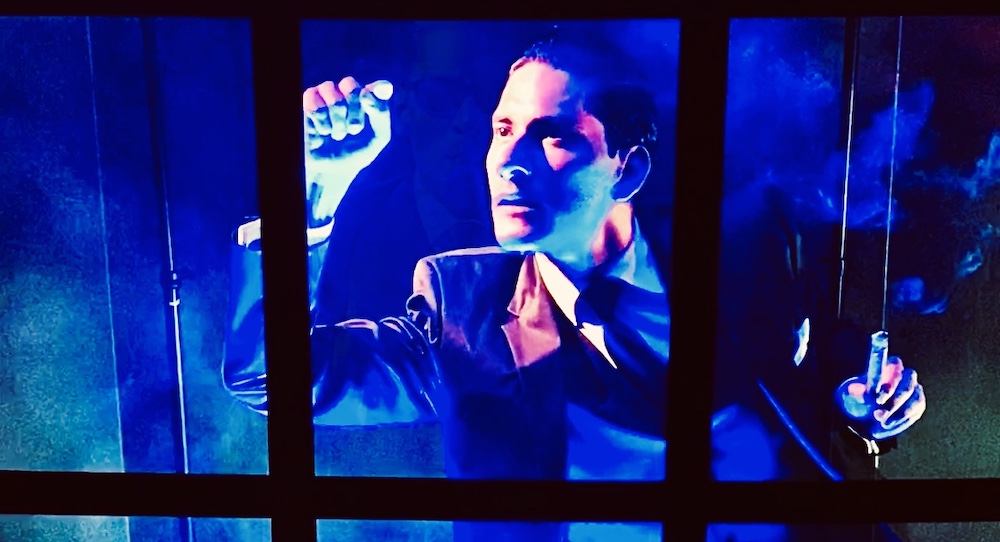 During the COVID pandemic, nine of the dancers of the Tabula Rasa Dance Theater company became sick with the virus. Half of the company members weren’t deemed eligible for unemployment benefits or relief. Liquidus, an ongoing weekly series of shelter-in-place solo performances by Tabula Rasa members, is the company’s response to this.

The piece begins with audio clips of news reports regarding the virus, starting slowly then overlapping each other, creating a cacophony of bad news much like the start to a dystopian movie. A vertically framed image appears. No filmmaker would film a movie in portrait, but the frame gives the sense that the dancer inside it has just enough space for their arms and legs. A box.

A man smokes behind what looks like a window frame. Or a cage? It’s divided into square sections. The smoke dances in a cinematic lighting set up, often blacking out his eyes and accenting sharp cheekbones and sallow cheeks. Making the man’s face seem to contort into exaggerated smiles and frowns as he peers out the window, watching you as you watch him. He wears a business suit, sunglasses and slicked back hair, but no pants. His dance is gestural, performative, deliberately gaudy at times, untechnical but full of striking imagery in a cinematic scene. He paces all of two steps left, then two right, back and forth.

This vertical box looks like it could be a black and white movie, a film noir of sorts, if it weren’t for the purple spotlight that hits the dancer center mass, and the half glass of red wine he holds. The light shines clearly to catch his shadow dancing behind him as he does, and the wine alternately swishing and rebecoming still in its glass. Facing the wall behind him, the man curls his head forward, slowly raising his glass to replace it in space. His shadow has a glass of wine for a head. He sips it, and his movements start to slosh like the wine.

An architecture of light is projected on the wall behind her, giving the space more depth than it deserves. She crouches below it, tracing the bottom of the structure. Like it, she dances in shapes, three dimensional lines, curves of her spine as she rises in and out of the floor. Her spine rolls in imitation of labored breathing. She hunches over, takes small slow steps. She runs, and incrementally increases the strength of her movements. To see a strong dancer imitate physical weakness is entrancing, and disturbing. She ends curled on the floor.

A rainbow of light fills her box in splochy patches. Bounces reverberate through her body, then morph into convulsions. There are physical panes of plastic glass forming a box around her that swing as she pushes against them. Her eyeline is fixed, but blurred, as if not seeing what’s in front of her, but instead focused internally. There seems to be a battle that we only see in glimpses of its physical manifestation, escaping through her effort to contain it.

The four dancers featured in this installment of the series are international artists, on lock down in New York City. Jonatan Lujan (Argentinian), Noriko Naraoka (Japanese), Winnie Asawakajanakit (Thai), and Felipe Escalante (Mexican).

For many international artists, the pandemic posed the question of whether to shelter where you live and work, or to escape home to family. And all were faced with an unexpected, added challenge a few weeks in. Immigrants were discouraged from applying for unemployment relief, as they feared immigration services would categorize the assistance under the Public Charge policy, and count their “drain on the system” against them should they attempt to renew their visa. For this and other reasons, many legal immigrant artists made do without. When national unemployment was at an all-time high, immigrant artists (a doubly vulnerable demographic) were expected to go it alone, some of them infected with the virus. While I don’t know the company members’ specific situations, it’s clear that Liquidus, or at least this first portion of the series, is a look inside that frustration and fear, the tired relief of coming out the other side, and the uncertainty of how to proceed from here.