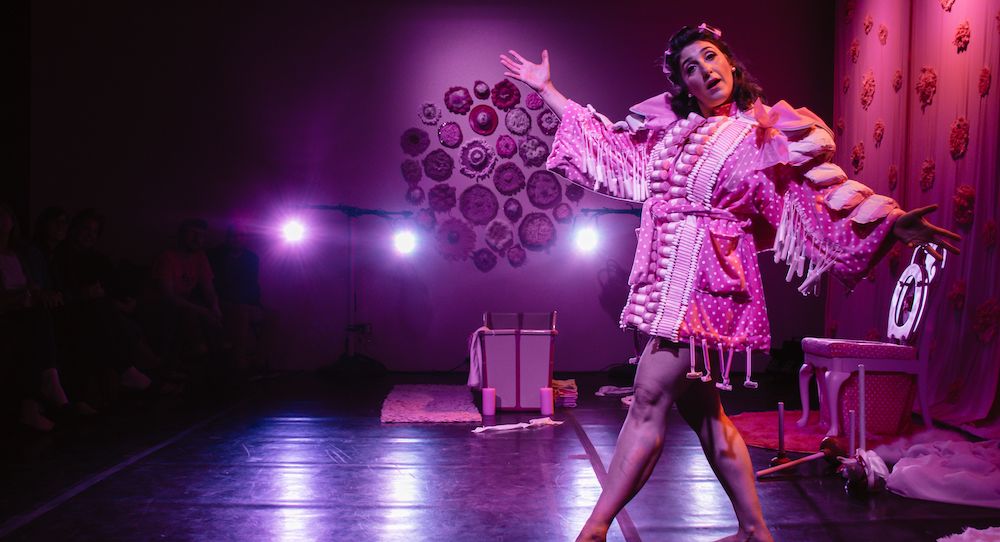 Sara Juli’s one-woman show, Burnt-Out Wife, is a dance-, song- and comedy-based conversation about the expectations and frustrations of a Happily Married Woman™. Quite literally, a conversation. Throughout the show, Juli is chatting with her audience, asking for their opinions on everything from what degree of infidelity they’re comfortable with to whether they’d like to try the chocolate bundt cake (her grandmother’s recipe) she’d made for her husband to “lock him in.” I tried it; it was delicious.

Clearly a multifaceted performer, Juli infuses her comedy with dance and her dance with comedy. The movement itself, post-modern-based and clearly well trained and rehearsed, isn’t the funny part. Instead, Juli uses it to accent her punchlines, and sometimes even to add a genuine and tender undertone to a hilarious show. The gestural nature of her style lends itself to the conversational tone of the piece. By building phrases of gestures like constructing an argument you’d have with your spouse, Juli explains what’s irking her by setting choreography to lovers’ quarrels, letting the audience in on her frustrations. Then by dropping some of the dialogue, she trains her audience to feel that frustration when cued solely by the dancing. Burnt-Out Wife is filled with clever movement-driven puns and jabs at the structure of marriage. She claws at the inside of her wedding veil. “There’s just not much room in here? It’s a little hard to breathe. It’s a little restricting. Can we talk about this?”

Pointing out the ridiculousness in some of the norms expected of married women didn’t take much added absurdity. Juli uses dance, alongside her comedy and sheer charisma, to question the automatic delegation of certain tasks to wives, from cleaning the toilet (which she turns into a dance, because when you’re alone in a marriage you have to find ways of amusing yourself), to handling the emotional labor. (“I go to marriage counseling. I go to marriage counseling, and my husband comes with me.”)

While Burnt-Out Wife (and really Juli herself) is a one-woman show, this production was made possible by a whole team of creatives. Production dramaturg Michelle Mola, set designer Pamela Moulton, costume designer Carol Farrell, sounds designer Ryan McDonald, lighting designer David Ferri, music arranger Sorcha Cribben-Merril, stage manager Megan Dechaine, and production manager Justin Moriarty all worked to make wonderfully distinct moments meld together into a show that, while it might not have a linear plot, leaves you with an overarching understanding of the problems present in our unchecked expectations of women, especially in marriage.

Aside from its pointed and important remarks on modern marriage, one of the show’s greatest achievements is its seamless integration of dance. Even when she isn’t necessarily dancing, her acting is always physically driven. Burnt-Out Wife isn’t a dance show. It’s an everything show performed by one woman who knows how to use movement to get her point across.