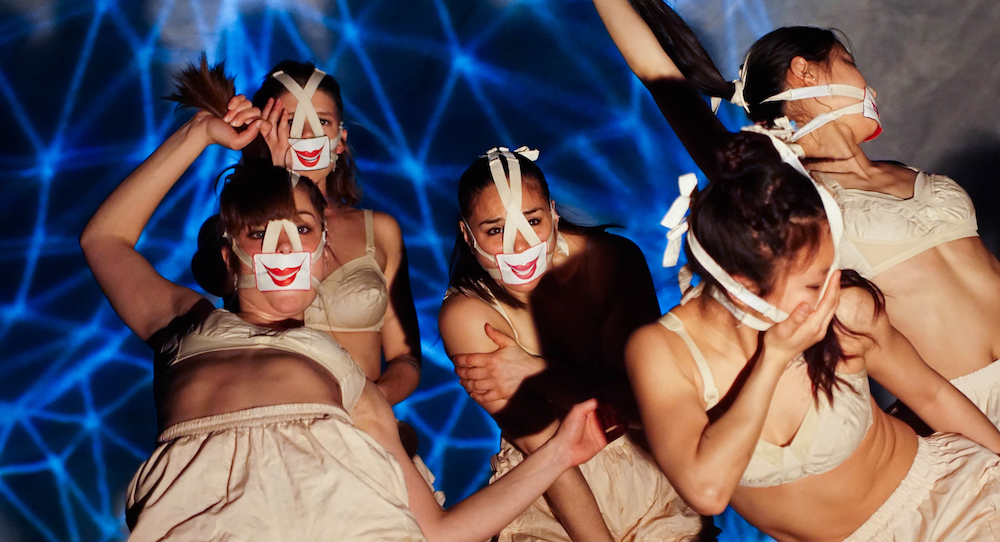 The multiplicity in KAIROS Dance Theater’s OBJECT. starts about as early as possible, with its title; the work centered on women being treated as objects (the noun), yet the title is pronounced as the verb (“I object”). A powerful message is implied in one capitalized word and a period — “I wholeheartedly object to the objectification of women.” Such elegantly-shaped, accessibly-presented complexity characterized the work from beginning to end. It took us through time, different atmospheres and separate women’s internal experiences. The program didn’t hold back from difficult things to illustrate or experience — yet the result was the potential to generate the kind of deep-seated emotion that is necessary to drive change.

The work opened with the whole company — six dancers — in a clean formation. They wore white brassieres and fluffy bottom undergarments, reflecting women’s garments from days of old. On top of those were fluffy tutus in light blue and pink, three in pink and three in blue (costumes designed by Artistic Director and Choreographer Deanna Pellechia, with assistance from Carlos Vilamil and I.J. Chan). Importantly for the work to come, they wore clear glass high heels. They began to dance, somewhat “cutesy” in style. They executed robotic movements reflecting doll-like qualities, stiff and controlled. They never dropped their big, sweet, charming smiles. Partnering in a classical ballet idiom referenced traditional gender roles and tradition more broadly. With the score singing the classic song “kiss him, and hug him, show him that you care….and you will be his,” it all fit together. These were women caught in a patriarchal expectation of beauty, and existing for male approval and pleasure. This section was an important precedent for where the work would go.

Also intriguing was the use of music with lyrics; that’s a bit of an unwritten “no-no” in contemporary dance, or at least something to be done sparingly and with extreme caution. Yet in many sections of the work, Pellechia made contemporary movement and music with lyrics work together to meaningful, forceful effect. The dancers executed that movement with sophisticated musicality, moving to music with and that without lyrics. (Sound Score designed by Kristin Wagner, also Rehearsal Director.) Immediately following that first section was another notable element of the overall work — projection on a small area and upper corner of the backdrop, the rest of it darkened (lighting design by Lynda Rieman).

The first of these projected images was an ad for a mimeograph machine, an office secretary oh so pleased with its performance and oh so compliant with the demands of her male boss. The black and white coloring, as well as her style of speech and dress, placed her in the 1950s or early 1960s (what many now call the “Madmen” Era, referencing the hit HBO drama). The level of submission to her male boss, and her general demeanor, was most likely off-putting to most modern audience members. Yet, as with many other sections and elements of the show, something about this affirmed that we haven’t come as far with gender equality as we may sometimes think. This ad also hinted at capitalism’s part in objectifying women.

A following section demonstrated a darkness underneath those big smiles and poofy tutus. Dancers wore chilling “smile masks” — masks with large smiles covering their mouth, securely strapped and unmovable (straps looped around the back of their head). Pellechia researched how women with mental health troubles, or simply seen as belligerent and “troublesome”, were made to wear these masks (real things from the twentieth century). Darkened lighting strengthened this shift of atmosphere and mood to something more sinister.

Part of me could viscerally feel the literal and metaphorical sense of constriction that such a contraption could bring (feeling one’s voice silenced, and in a very literal, physical impediment to full, healthy breathing). Movement also reflected that constricted feeling — tense, jolty and uneasy. It was almost as if an outside force was moving them, rather than them moving of their own will.

In later sections, another notable element came in — how women themselves  perpetuate that sense of constriction by their gaze upon each other. One trio had two other dancers sitting at the edge of the stage, facing those dancing. Later, Wagner danced a memorable solo of committed, technically adept, and nuanced movement. A complex, stormy emotional space, as well as a feeling of just not being able to please (and certainly not for lack of trying), seemed clear.

In this section, even more dancers faced her from the stage’s edge, gazing intently. I could almost hear the cruel words women can call each other, including accusations of prudishness or promiscuity (again, that sense of not being able to please), echoing through my head. Yet I also thought that this could be a witnessing, a recognizing of a fellow woman’s struggle — or perhaps even some of both? Such can be the complexity of how women interact with each other, which these creative choices cogently probed and depicted.

Within these sections, Pellechia effectively used movement motifs, giving audience members grounding pieces to which they could latch on (an analogy: stand-up comedians/comediennes calling upon prior jokes in their set). A secondary effect of this approach, through a feeling of continuity, was reinforcing that message that things haven’t changed as much as we might sometimes like to think they have. This movement was multifaceted, enticing, and compellingly theatrical. Wagner offered many of them in her memorable solo — opening legs wide and then snapping them back together, backbending and bringing her elbows in while her hands reached up, grabbing at her ponytail and (chillingly) lifting her own head higher.

Earlier, before intermission, Pellechia danced another memorable solo, memorable for its uniqueness within the work — movement having more ease and continuity than much of the movement elsewhere. As she descended to the floor, an energetic lift still pulled through the top of her head. “Why can’t I be conventional?”, the score sang as she danced. I found these words interesting along with that uniqueness of her movement within the work.

Toward the end came a section of the dancers wearing one heel: stepping unevenly, and — impressively — kicking, lunging, then spinning to an “x” shape on the ground. That uneven stepping created a compelling auditory element. On a broader level, the section underscored the uneven, off-balance feeling that women can feel from navigating so many fine lines of appropriateness and expectation (going back to that feeling of never being able to get it quite right).

Following that was a section that seemed capable of wrenching the gut of women (or empathetic men) in the audience most of all, more than anything up to that point on the work; voiceover of (now) President Donald Trump on that infamous Access Hollywood bus rang through the theater. While moving, still tense and uneasy, dancers put hands to stomachs — as if sickened. At those unforgettable words, spoken years and years ago (but still ringing through our culture in so many ways), I felt sickened, too.

Then came a woman’s voice discussing objectification causing significant harm upon women’s minds and bodies. Dancers began to throw off their glass heels, throwing them again and again in anger. More shoes came on stage, and they threw those too. In another sign of the layered, nuanced nature of this show, the glass slipper connected with the story of Cinderella. The cultural tale from which the beloved Disney movie derives comes from China, where the revering of small feet led to torturous foot binding for thousands and thousands of young women through many centuries.

Then came an ending not as clear, but also seemingly ripe with the potential for nuanced meaning. One dancer walked on all fours as other dancers loaded her back with those glass slippers: carefully, slowly, one-by-one. The load upon her back grew and grew. I was puzzled; was this referencing “white feminism”, or white women advocating for themselves and not women of color — and in so doing placing burdens upon them? This dancer is an Asian woman — yet so are other dancers who were placing heels upon her back.

Lights went down as she walked on hands and knees, with her back impossibly stacked with heels (I was genuinely impressed that they didn’t all fall). Though this ending didn’t seem clear to me, it also seemed to me that there was a powerful, insightful meaning there that escaped me. Given the skillful nuance of the rest of the show, that would only make the most sense. Though I feel as if I could write a dissertation on this multifaceted, insightful, adeptly created and presented work, I will wrap up this review with gratitude toward KAIROS Dance Theater and all involved artists. Thank you for shining on a light on this timeless issue — with courage, skill and generosity.