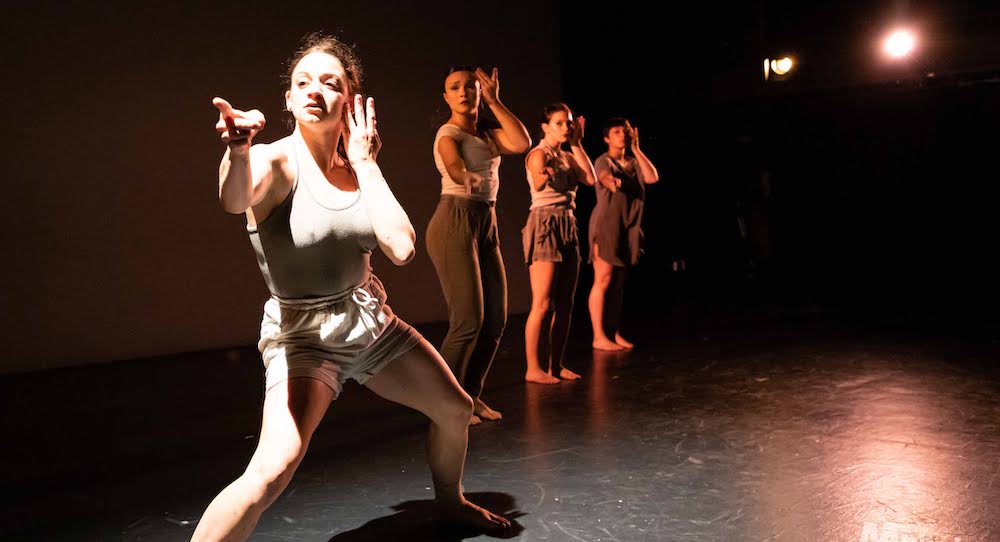 A reach conveying longing and loss, a falling to the floor conveying despair and hopelessness; dance can show meaning like no other art form can. That is, directly through a moving body, or bodies, in space. Demonstrating content clearly through the body alone is no easy feat. In fact, it can take years of learning from trial and error, getting to know the nature of one’s authentic creative voice, and calling upon a trusted support system.

Projection, text, music and other creative elements can support this transmission of meaning through the body. These intersections of movement and other artistic media can be fascinating and pleasing in and of themselves. Yet meaning coming only through the body is something of its own entirely. In conversation with friends and choreographers after the recent split bill presented by Kristen Klein’s Inclined Dance Project, inQUAD, I thought about these matters deeply. A show like this one could make that happen.

kamrDance’s Everything is taken care of, choreographed by Alexis Robbins, opened the show. The work, danced by Robbins and with spoken word from Sarah Robbins, was a striking melding of speech and movement. Before lights came up, we heard a woman in the audience speak of the end of another woman’s life. As lights came up on her, they also came up on a dancer on stage, walking backward slowly. As the speaker’s voice began to rise, the dancer turned to face front, swiped an arm and rose unto relevé — an attention-grabbing shift. As intensity of the spoken content rose, and the quality of the speaker’s voice with it, so did the dancing. Sarah poetically spoke of the exhaustion women face, something that even leads them to an earlier death.

Alexis found different tempos and intensities in her dancing, continuing to bring something fresh and unexpected. Sarah continued to delve deeper into the idea of the lifelong demands involved with being a woman, which Alexis continued to move out with power but also a soft grace. Sometimes the timing of movement and speech aligned, and sometimes it didn’t. That variance brought more of the unexpected that kept me compelled. Toward the end of the work, Alexis walked up scaffolding and — for the first time — also spoke. The stage was bare. It felt like open space for we audience members to ponder the content and larger meaning behind what we had just seen and heard. Ponder I did; my mind raced. My body felt touched and captured by the power of what I just saw.

Next came the principles of: part 6, a memorable work from Lauren Beirne Dance Works and choreographed by Lauren Beirne. Raw movement, evocative costumes, and poignant voiceover demonstrated the power of women being vulnerable and baring their true selves. Voiceover described first learning to wear makeup, an insecure girlfriend asking a significant other, “Do you think I’m pretty?”, and other evocative illustrations of pressures to conform to societal beauty standards. Along with that voiceover, dancers sometimes danced alone and sometimes related — contentiously, in support or in unison harmony. That seemed to encompass how women generally relate with one another.

To end, all dancers stood in a diagonal line, facing backstage right and holding hands while one dancer broke forth in a solo — fierce, independent, but also moving like something else was moving her. She rejoined the group, and lights went down on the whole group. I experienced this ending as an impactful illustration of the power of women standing together.

Are you or do you?, choreographed by Alexis Robbins in collaboration with Luiza Karnas, came before intermission. It was another intriguing meld of speech and movement — in this work, tap dance, contemporary dance and a bit of physical theater. Lights came up on a set of boxes, stacked two-by-two. Two sets of fingers began to crawl like spiders on the box. The hands then began to make beats, followed by tap shoes (controlled by the same hands) doing the same thing. The timing and quality of these actions was quite comedic, and the audience laughed.

Lights came up on the stage and we finally saw two full dancers, who moved unto the tap boards. They tapped with classic tap dance vocabulary, but also modern dance’s release and weightedness. They spoke meaningful phrases on identity such as “Am I a tap dancer, or do I tap dance?”, “the heaviness of knowing who you are,” and “Does not knowing weigh you down?”.

While I didn’t see the connection between this theme and the movement (apart from that weighted quality in the movement relating to that idea of heaviness and being weighed down), both individually were satisfying in different ways. The ending struck a bit more of a cord with me; one dancer said, “It does,” answering the question of “Does not knowing weigh you down?”. Something about the way she said this left open room for further thought and growth. The work left me with food for thought and the movement lover in me fulfilled.

The Santagado sisters of mignolo dance, two of the four female choreographers showcased in the program, also offered memorable work. Charly Santagado’s The Paradox of Translatability was another work of movement set to text. The movement in itself was inventive and pleasing. Poignant words, striking movement — I was overall satisfied. Eriel Santagado’s Translation Study No. 3 had contemporary dance set to the score of the title. It was an aesthetically striking interpretation of music to movement one wouldn’t normally associate with it. Her facility, from spinal pliability to line of her extensions, pulled me in and kept me wowed.

Inclined Dance Project’s groupthink was a stellar closing work, a standout in the show. It managed to convey meaning mainly through the movement itself, something that’s no small feat. Shifts betweens solos to partnering choreography to groupwork felt thoughtfully constructed, towards conveying the program’s description of the work — “when conflict, decision making, conformity, and group dynamics affect individual creativity and independent thinking.”

Group structure, in accordance and in opposition with the movement of a solo dancer, reinforced this idea. For instance, a group danced in unison, spread across the stage, while a soloist moved amongst them dancing different vocabulary. Soon enough she joined the group, however, it closing in and her having no more room to move independently. The same happened again with another dancer. This was more than just a singular occurrence. Also happening at certain points was an “in-group, out-group” effect of different groups forming and dancing certain movement phrases while other groups danced others. Illustrated in these occurrences was how whether born of inclusion or exclusion, groups of people will form within larger groups of people.

Costumes and lighting were simple, yet visually appealing. They allowed focus on the skillfully-constructed movement vocabulary and structuring of the stage picture (such as in formations and how they shifted from one to the other). There was an organized chaos to it all, just like in a community — full of autonomous individuals who must nonetheless to some level conform.

Movements such as deep bends with knees out to the side (grand plié à la seconde in ballet speak), long lunges and parallel forearms jutting forward from the torso conveyed strength, assertiveness and conviction within each of these individuals — alive despite the pressures from the larger group. Or, perhaps, those things remained alive because of those pressures? Whether chicken or egg, that’s compelling food for thought.

Klein and her company achieved translation of this theme of conformity and nonconformity, the group and the individual — all without voiceover, lyrics, speech, or anything of the like. Works prior in the piece did that with varying degrees of effectiveness and originality, but overall commendably. Solely through movement, however — that’s a whole other ball game. In a world that consistently underestimates and underutilizes the power of the human body’s movement, that’s a special thing indeed.