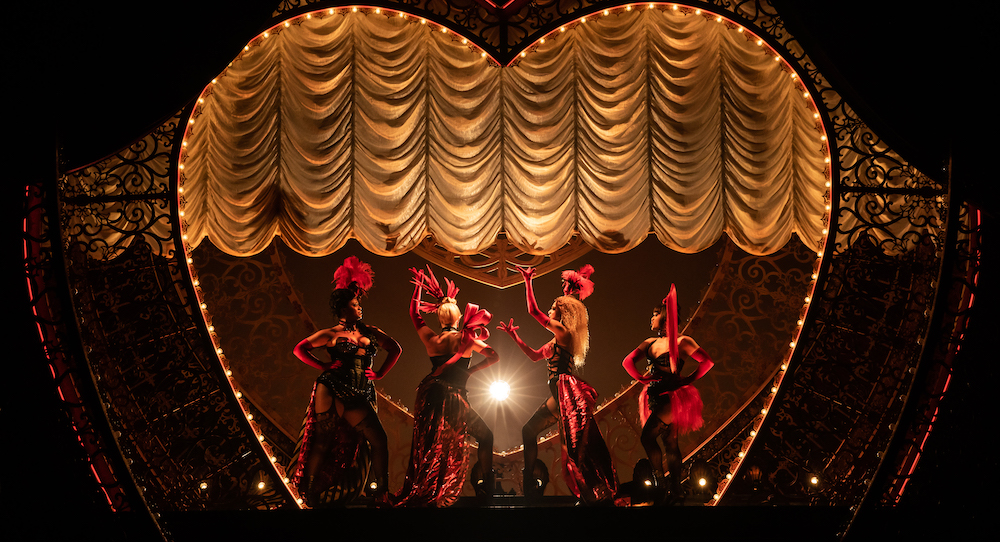 Moulin Rouge! The Musical opened at the Al Hirschfeld Theatre on July 25. Directed by Alex Timbers with choreography by Sonya Tayeh and starring Aaron Tveit and Karen Olivo, the musical is a stage adaption of the 2001 film, Moulin Rouge.

Before the show even begins, the audience is enamored by the swanky set. The stage is framed by seemingly infinite rings of flaming hearts with the neon red text “Moulin Rouge” dangling across it, and on the balconies we see a bedazzled windmill and a shining blue elephant (not real, but big enough to be). As people continue to be seated (which is an extended process because everyone has their phone out taking pictures), burlesque figures saunter into the space with an air of nonchalant sex appeal, successfully imbuing the theater with a nightclub atmosphere that hangs in the air throughout the course of the two acts.

I’m struck early on with the thought, “This is pretty raunchy for Broadway…” And I love it! Talk of carnal desires, views of fishnets and thongs, and a diverse cast featuring all shapes and sizes help carry across a variety show vibe that’s not altogether different from the alternative/queer scene in Brooklyn with its aerialists and drag queens.

The cast is huge both in talent and in number. Tveit’s songwriter protagonist, Christian, has complete control over every nuance of his voice, and his performance feels utterly genuine even as it passes through a wide range of emotions (curious, lovesick, vengeful, grief-stricken). His counterpart, Olivo, who plays Satine – queen of the club – matches his remarkable vocal range and control, and is the fiery, commanding woman you expect her to be after she is spoken so highly of by the rest of the cast.

Satine gives Beyoncé a run for her money in her rendition of “Single Ladies” (which includes choreographic references to the music video), and her grand entrance from the ceiling of the theater to “Diamonds are Forever” (fittingly followed by “Diamonds are a Girl’s Best Friend”) is about as epic as they come. Despite her indisputable triple-threat talent, sometimes her reactions felt overdone, and I didn’t believe that she was in love with Christian; there was no palpable chemistry. And quite frankly, due to the speedy pace at which the characters were required to fall in love according to the musical, I’m not sure we can fully blame Olivo. Within the context of a largely plausible storyline, the love story felt a bit unrealistic.

While the love story may have its shortcomings, Moulin Rouge! The Musical more than makes up for them with its brilliant soundtrack. Songs from the movie include “Lady Marmalade” (obviously), “El Tango de Roxanne” and “Come What May” (with an especially chilling reprise at the end of the Act 2), but the other pop classics steal the show. Many generations of music are performed, which makes the soundtrack appreciable by all audience members; this was undoubtedly a smart business decision and perhaps an artistic choice parallel to all the years the real Moulin Rouge has been in business.

With the start of each seamlessly placed song, the crowd laughed and was excited to hear what new mashup was in store. I wonder if Adele ever thought “Rolling in the Deep” would be used as a revenge song on Broadway or if Walk the Moon wrote “Shut Up and Dance” with a musical theater number in mind. (Probably not, although I hope these artists reap monetary benefits by being included in the show.) Other soundtrack highlights include “We Are Young” by Fun, “Bad Romance” by Lady Gaga (which had the Tayeh choreographic flair we all know and love) and, most memorably, “Firework” by Katy Perry, sung by Olivo with such passion that tears welled in her eyes by the end of the song.

Another major highlight was the in-depth representation of bohemia vs. aristocracy. At one point, the owner of the club (who despite being “lower class” has the best vocabulary of anybody in the show) breaks the fourth wall and makes a joke about the location of people’s seats in the audience (i.e. orchestra vs. mezzanine) to chide at the inescapable classism that exists in society. The Duke’s wearing his dollar signs on his sleeve starkly contrasts with Toulouse’s personification of the poor, passionate artist who constantly touts the glory of poverty. (There are also many meta-details within the show like the meta-love triangle, the meta-costuming and so on, but I won’t bore you with the details.) One of the most powerful lines is spoken by Tolouse to the Duke: “I am an artist, you should quake at that,” and is supplemented by the idea that art can make someone immortal. Not the worst impression to walk away from a show with if you ask me.

With dynamic shifts abound, a set that seems to defy all logic in the best possible way, and a touching, counterculture morality, Moulin Rouge! The Musical is exactly what Broadway needs. Enter a world of fishnets and sequins, true love and heartbreak, a meta-commentary on what our world is and perhaps has always been yearning for.