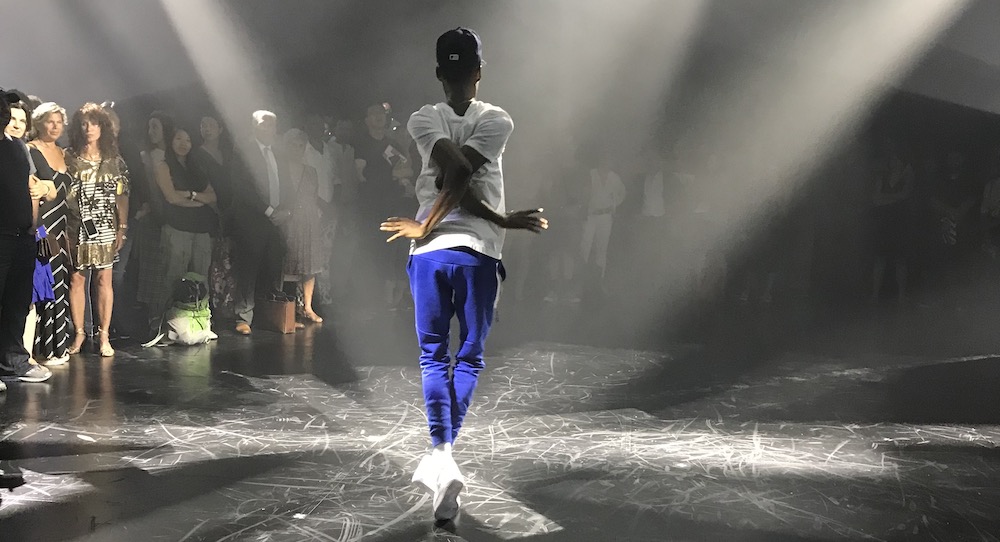 Maze is a world premiere Shed commission with dancers from The D.R.E.A.M. Ring and The Shed’s FlexNYC program. It was co-directed by Reggie ‘Regg Roc’ Gray and Kaneza Schaal and plays at The Shed through August 17.

The chief style represented is flexn, a form of street dance with Jamaican roots. The piece is meant, through the use of a “maze of light”, to explore the puzzles and poetry of human coexistence and both visible and invisible forces present in the world around us.

The piece begins with the audience scattered throughout the large black box theater, and huge Xs of light dance around the room. After a few minutes of chatter, dancers start entering the space, one by one at first, but then in groups until they are spread out among audience members. Some people watch paralyzed at first, while others immediately sense their freedom to walk around the space as the dancers assemble into couples under each bright X.

A few things are immediately striking. For one, the wide variety of body types represented by the dancers (something I appreciated both aesthetically and for the message it sent). Also, the costumes put emphasis on brand names like Nike, Supreme and other major street clothing brands (which felt like a very conscious choice and a possible commentary). There was a fluid boundary, both physical and metaphysical, between the audience and the performers (leaving the audience with a sense of autonomy, which many expressed by taking out their phones to video and take pictures, cheering regularly, and moving around the theater).

The initial immersive set-up produced a gallery-feeling (later to be replaced by a more traditional audience-seated-in-front arrangement), and as I walked between each duet, I felt like I was walking from painting to painting, looking until I was satisfied with my understanding of what was being presented and then moving on to the next “image”. Although at first I found audience members on their phones distracting, my irritation soon evolved into an appreciation of the lack of preciosity and pretension in the room despite its being situated in a state of the art venue with high production value.

As the live drumming began to crescendo, couples cyclically changed places with one another, culminating in a tableaux center stage. I enjoyed the way that the audience organically formed a circle around the group, and I was conscious that the performers likely didn’t know exactly how an audience would spatially react to the work considering it was opening night. From this centered moment, dancers peeled off one by one, leaving a tall, lean man in blue pants whose flexn solo (a definite highlight of the evening) alternated between staccato and slithering and was the first of many gasp-inducing sections.

The “gross out” factor of shoulders popping out of socket and arms twisting into impossible positions served as a through line for the evening, and was the backbone of some of the most successful moments in the piece. The seemingly impossible contortions transported the spatial maze of lights in the theater (representative perhaps of the maze of the socio-political world) to the individual, suggesting that the body (and particularly the mind) is also labyrinthine.

Other tropes included hat tricks and miming, although neither were nearly as successful as the warped flexn lexicon. Almost half of the hat tricks ended in a dropped hat, and much of the miming felt overdone and lacking what real contact might have provided. There were also some instances of tutting, which were very strong and attention-grabbing. I found myself wanting the tutting phrases to last longer and be taken farther, especially when the vocabulary was used by the dancers to physically manipulate one another’s bodies.

Another highlight was the powerful live music accompanying the work in juxtaposition with rap music interspersed at just the right intervals. From whispers of “didn’t this happen before” to intense tribal drumming to gospel melodies, the multifarious sound score transitioned seamlessly from one song to another. The final song was no exception; a vocalist came out into the space and belted acapella while one of the performers with the least stereotypical “dancer body” moved with fervor around the stage. The continuity of the music did, however, inadvertently highlight the choppiness of many of the performance’s transitions, and at some points the dancers’ energy seemed inferior to that of the music.

Maze explored numerous elements of black experience in America from gun violence and police brutality to unwavering faith in a Christian God, gang activity and more. While there were some effectively original iterations of these issues, many of the scenes felt overplayed and obvious. A further contributor to the shortcomings of some parts of the piece was that the dancers seemed to have varying levels of both skill and commitment. The most invested dancers were wide-eyed, borderline creepy and suffuse with animalistic intensity, while some of the others were blank-faced (one girl was even smiling, which was quite confusing).

Nevertheless, Maze is a successful re-contextualization of hip hop within the world of contemporary art, and I’m left wanting more. More hip hop in the world of “high art”, more interplay between hip hop and other styles, and more label lacerating.