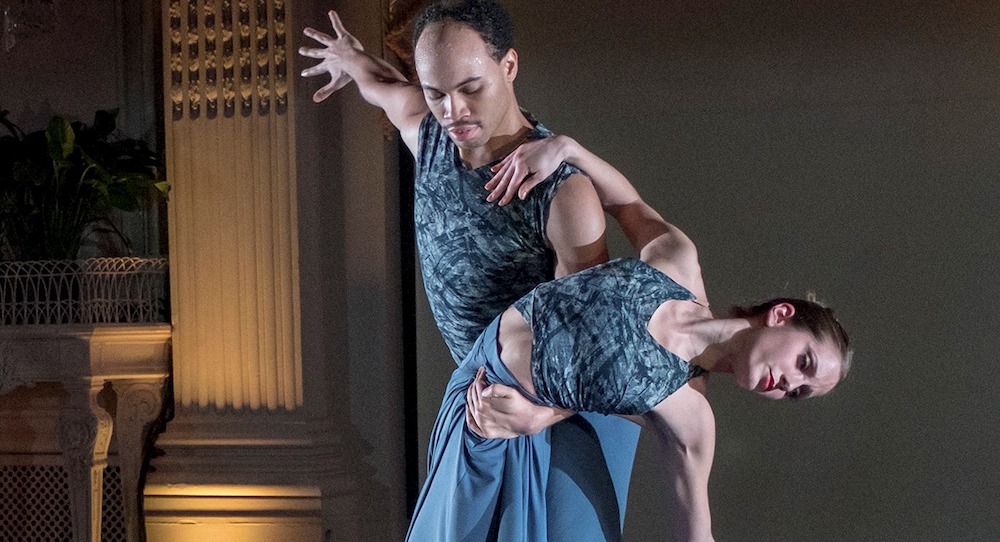 When it comes to programming a multi-work dance performance, what does “diversity” mean? How might artistic directors create it — skillful selection of various contributing choreographers, multiple other collaborators, effective use of theme, et cetera? Whatever the cause or causes, Island Moving Company (IMC)’s 2019 season opener A Collection of Attitudes offered an assemblage of works with a compelling, pleasing stylistic variety. Dancers fully committed themselves to thoughtful choreograph work, which contributing elements (such as costumes, lighting, and music) helped further bring to life.

Closing out the first act was A Tessellation of Beauty and Light, choreographed by IMC Artistic Director Miki Ohlsen — in other words, and in reality, an assemblage of aesthetic elements coming together in lovely harmony. A cast of six dancers started bent over, then raised quickly to one foot. After re-folding at the hips to repeat that rising, arms gestured like rolling waves, initiating from the elbows. This gesture led them into turns and new formations. This set the tone for the movement to come — multi-level, rhythm in and out of repetition, both geometric and more abstract.

Also prescient was the aesthetic result of music, lighting, and costumes together in support of the movement. The dramatic instrumental score featured chords shooting up and crashing down. Lighting (by Matt Borah) was amber-colored. By coming from the sides of the stage it brought a dimmed quality that added to the drama of the music and movement. Costumes (by designer Eileen Stoops) brought a final touch to all of this compelling tension, shimmering tops and wide-legged tan pants offering it a striking elegance and polish.

The way duets and a trio came together also created dramatic tension, one that kept me pulled right in. A trio after that opening whole-cast section — danced by Jose Lodada, Gregory Tyndall and Rhea Keller — added a bit of interpersonal content with them seeming to observe each other in short solos. There was also wonderfully controlled abandon in the movement, and both of those elements together made me want the section to be longer.

Following that trio was a first duet, danced by Katie Moorhead and Timur Kan, brought further ferocity to the movement — as well as inventiveness, such as through a lift of Moorhead propelling forward off Kan’s thigh (coming from seated on it). The second duet — danced by Lauren Difede and Lodada — brought a bit more calm in quality, but drama through contrast; Lodada leapt while Difede turned. A third duet, danced by Brooke DiFrancesco and Tyndall, had a bit more lift in its quality, matching a shift in the music bringing a feeling of fighting past struggle to find hope.

An ending group section topped off the dramatic tension and aesthetic intrigue of the whole piece. Movement from the beginning group section of the work brought a pleasing circularity. It was all a lovely tessellation, an arrangement of shapes fit together. The final ending moment was just as pleasing and compelling, a big lift of one dancer in the air bringing a feeling of hope even as the musical notes were brooding. Even through the dim, they had hope to reach higher.

Second in the second act was Accept the Unexpected, choreographed by Mark Horaation and danced by Difede, Shane Farrell and Tyndall. Difede danced a striking solo in the first act, The Limit of One (choreographed by IMC Assistant Artistic Director Danielle Genest), even more nuanced yet clear, powerful yet beautifully soft than when I saw her perform it last. She brought all that to bear in this trio work. Over in the work, clear from the start was a sense of in and out, together and apart, like waves drawing towards and leaving the shore over and over.

For instance, Difede and Farrell drew together as if about to slow dance, then stepped back and away into more virtuosic movement. They embraced to release, turning away from each other towards separate parts of the stage. There was a sense of tense affection, which  this movement combined with their facial expressions and movement qualities brought to life. That tense affection seemed to be the type characteristic of many relationships taking their last few breaths — an attempt to hold on to the love that was at least once there through opposing expectations, needs, desires, et cetera.

Dramatic, yet in a way reserved music and lighting set in place this realistic feel. Costumes of everyday dress casual, elegant yet understated, further supported this feeling. While the first piece was abstract and aesthetically focused, this was all narrative and directly connected to the lived experiences of countless people past, present, and future. Each approach has its own strength and value.

At a mid-point in the piece Difede flipped over Farrell’s back, them then again embracing and opening. He then slowly walked offstage, as Difede moved around the space with expansiveness and a feeling of yearning — as if searching for herself and a way to keep him from walking away. She watched him walk offstage and held her hands to her heart, seated on her heels. Tyndall entered, and a shift in mood evolved. Music and movement become more lifted, light, and hopeful — floating piano notes meeting strong leaps and lifts.

Tyndall entered and turned, quickly and smoothly as a top, signaling to her his presence and his identity. Then they danced, him seeming to follow and support her. A unison section towards the end exhibited both of their sets of strengths as performers, as well as the growing harmony between their characters. They ended in an embrace, and lights came down. I smiled to see the piece’s illustration of the truth that a window closing might mean a door is opening. Clear stylistic choices, distinct in the constellation of works the night offered, helped make this illustration possible.

Other distinct stylistic offerings in the night were Night Vision (choreographed by Genest and danced by the company), an evocative and mysterious exhibition of moving through dark and light, and Semillas (choreographed by Rodney Rivera, meaning “seeds” in Spanish), a heartwarming piece of traditional ballet mixed with Latin American cultural dance and the caring gifts of communal movement with nourishing fruits of the earth. Each piece had its own feel, flavor, and allure. A lovely thing that art can provide is a space for all of these approaches to have their own beauty and worth — unlike in many corners of this world, none “wrong” or “right” but just what they wonderfully are.