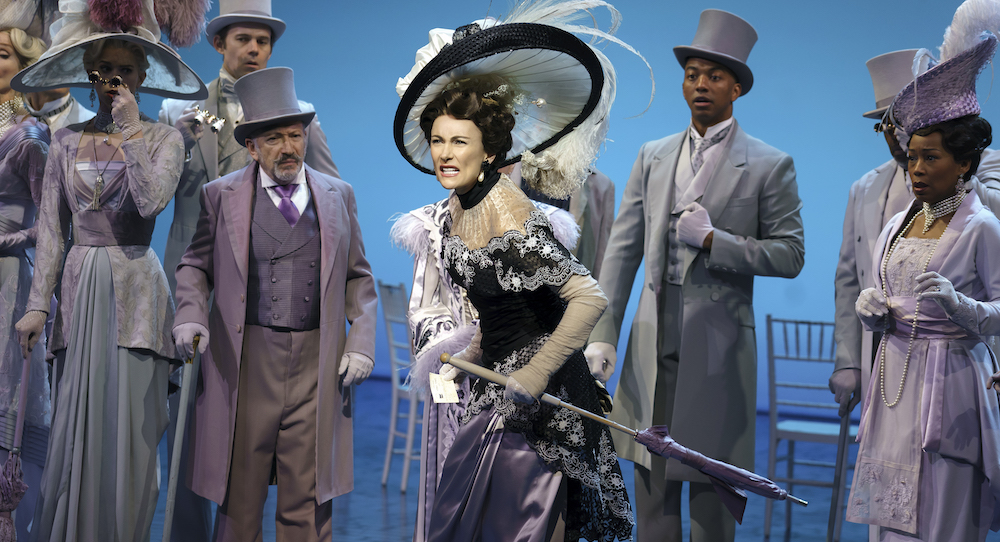 Christopher Gattelli’s choreographic record can’t be characterized. From Gigi to Cher, Newsies to The King and I, and SpongeBob Squarepants to My Fair Lady, his work is clearly not limited to specific genre, style, time or place. One thing that always rings true, however, is Gattelli’s focus on the world in which the characters live, and how dance lives in that world. Whether a brand new musical, a beloved revival or a quirky cartoon, the choreography always feels authentic. When dance happens, the audience never has to wonder why. If singing is a heightened need to speak, then dancing is the same — but to move, to feel, to emote. The worlds of Paris, France and Bikini Bottom couldn’t be more different. But Gattelli’s choreography somehow works in both. 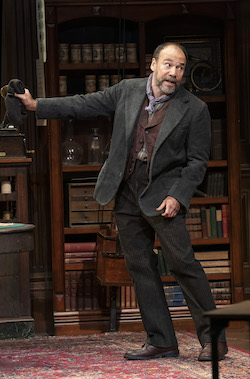 My Fair Lady is known for its sweeping score, not necessarily its full-tilt dance numbers. But in Lincoln Center’s revival production, Gattelli weaves in choreography that seamlessly rides the waves of the music and flow of the story. The character actors in the show (i.e. Pickering, Mr. Doolitle) each have movement vocabulary that enhance their character development. Drunken Doolittle was light on his feet as he tapped a tricky soft shoe. Pickering skipped and scooted across the library. Even Eliza transformed through movement — her clunky gait and slumped posture evolved into grace and poise. This blocking direction might not stand out as “choreography” to every audience member, but that’s why Gattelli’s work is so masterful — it’s so natural that it becomes inseparable from the characters themselves.

There were three larger ensemble numbers in My Fair Lady, each memorable for distinct reasons. First, the infamous horse race scene. The stage was bare except for a bright light blue scrim. Choreography was minimal — elegantly dressed couples glided carefully across the stage. Standing in a line across the front of the stage, the actors slowly turned their head from stage right to left as if following the horses racing down the track…only to resume their unimpressed strides around the stadium. Despite the minimal movement, the scene was incredibly powerful and sincerely funny. In a way, it was reminiscent of Bob Fosse’s “Rich Man’s Frug,” where the actors are just so wealthy and proud that every movement is so beautifully blasé.

Another ensemble dance was a sweeping waltz before Eliza’s grand entrance down the staircase. Ballroom scenes seem to always fall short of making a truthful and beautiful impact. But when the duos performed an infinite turning sequence — with the circle of pairs spinning as the women twirled by their partners’ lead — the stage became enchantingly dizzy…a perfect set-up for the stillness set upon the stage during Eliza’s entrance. 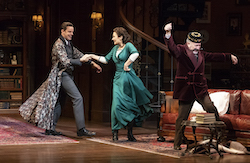 A much more energetic number, “Get Me to The Church on Time,” also came in Act II. Doolittle celebrates his last few hours of bachelorhood with his well-oiled friends and a handful of can-can girls. The women kicked and shimmied while the men oogled and tottered. The highlight of the number came when the entire ensemble assembled into a parade-like line stepping diagonally downstage stage left, championing Doolittle on his journey to his wedding. The image was one of those memorable musical theater moments when a scene of choreographed chaos comes together as one.

I was hesitant to review the dancing of My Fair Lady. I asked myself, “Who is Chris Gattelli?” Unlike some of his contemporaries, I had trouble qualifying his aesthetic and narrowing down his signature -isms. But the fact that that’s so hard to do with Gattelli proves his genius versatility. Maybe there’s an even greater artistic power in being so invested in the world and authenticity of the show and the characters.