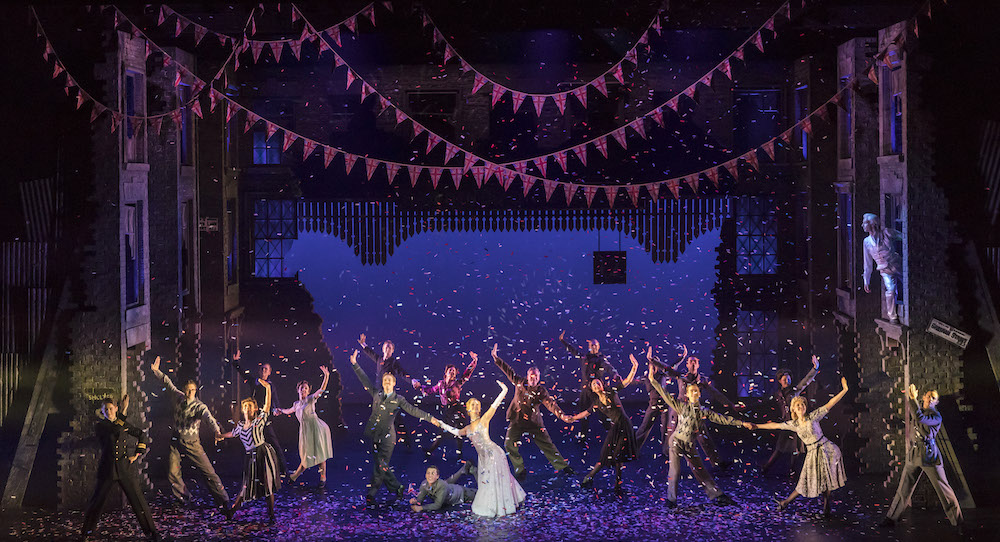 Choreographer Matthew Bourne is probably still best known for his Swan Lake (1995), which featured an all-male, bare-chested swan ensemble and a darker plot than even the tragic classic tale. While I am still hoping to see those legendary swans in person someday, catching Bourne’s production of Cinderella at the Kennedy Center this week was an unexpected delight.

Set to Prokofiev’s darkly romantic score, the action is set in London during World War Two with the entire second act ballroom scene inspired by the famous bombing of the Café de Paris on March 8, 1941. As I walked into the theater, I noticed signs posted on the theater doors warning of the dangers of being in a strike zone. The stage curtain was open, revealing a massive set featuring a giant glittering slipper surrounded by the remnants of bombed out buildings. Our first glimpse of the cast was accompanied by the sights and sounds of a black and white newsreel explaining to Londoners all the fine points of surviving an air strike. As I expected, Bourne’s Cinderella had a dark, cinematic feel — equal parts fairytale and nightmare.

Cinderella as performed by Ashley Shaw is a petite, bookish girl with a father who is physically present but confined to a wheelchair and unable to temper the whims of his wife, brilliantly portrayed by Madelaine Brennan. Cinderella is ostracized by her glamorous stepmother and harassed her flamboyant, haughty stepbrothers and sisters. The first act takes place entirely in the home, which is a spare space conjured by few key pieces of opulent furniture and edged by the shells of crumbling bombed out buildings. Lez Brotherson’s evocative sets overshadow the machinations of Cinderella’s frivolous family to such an extent that I was never at quite at ease with the humorous bits; the whole artifice was so clearly doomed.

When an injured pilot (Andrew Monaghan) comes stumbling in the door, Cinderella quickly comes to his aid, falls in love with her charge and then weeps when he is quickly expelled from the house by her jealous stepmother. To be honest, this whole sequence of events was among the most rushed and least engaging parts of the show, but it served the purpose of driving the action forward and propelling Cinderella out into the wider world. That said, I thoroughly enjoyed the clever shtick of Cinderella dancing with a male dress form in lieu of her ousted love. The humor and style was reminiscent of some of my favorite Fred Astaire dances, especially when the dress form is replaced by Monaghan playing a bumbling dream version of Harry, Cinderella’s pilot love.

Cinderella ultimately flees her home in a pair of glittering silver pumps and goes in search of her man with the help of a dazzling male angel danced by the very charismatic Liam Mower. Once outside, she quickly finds herself faced with all the horrors of London during the Blitz, including air raid precaution wardens, petty criminals and Bourne’s nightmare creation of gas mask dogs — part human-part dog creatures with gas mask faces. When a blast hits, it knocks Cinderella to the ground and elicits an audible gasp from the audience, mostly due to the uncomfortable volume of the blast delivered in surround sound which seemed to rumble our very seats. In her unconscious state, she is greeted by her guardian angel and dazzled by an apparition of bomber pilots in shimmering white who perform a series of gorgeous leaps and jumps in quick succession. The first act closes with her riding off into the starry night in the side car of a gleaming white motorcycle with her angel at the helm.

The second act both begins and ends with the destruction of the Café de Paris in London. Cinderella’s guardian angel reveals himself to be a master of time, perhaps an angel of death, as he turns back the time and transforms the carnage into a glimmering party scene. Cinderella’s vain, callous stepmother and her whole dysfunctional stepfamily are elegantly clad in suits and gowns that evoke the glamour of 1940s Hollywood despite their decidedly raunchy behavior. Some of the most delicious dances of the show unfolded in this cabaret-like environment with lots of lush, idiosyncratic choreography, much of it performed in unison by the full ensemble. Our heroine returns in a full-length silvery gown and reconnects with her mysterious pilot despite the efforts of many other characters who endeavor to lure them elsewhere. Of course, all the while we know that this glittery world will soon be reduced to rubble, so it is a relief to see Cinderella and her pilot slip out of the club together moments before the inevitable blast.

For most of the third act, Cinderella and her pilot are separated again, and both teeter on the edge of insanity in their desperation to be reunited. At one point, Cinderella’s step-family visit her in a hospital which seems to be a mental health facility of some kind, and the stepmother tries to suffocate Cinderella. Meanwhile, Harry the pilot has gotten into an altercation on the streets and sends him to the same hospital where they are finally reunited. I suppose it is the happiest of endings Bourne could conjure up for his odd interpretation of Cinderella, although I could have done without the whole murderous stepmother sub-plot, as it did not make much sense to me.

In any case, the final scene of the ballet has a gorgeous, golden age of Hollywood feel to it, which I found really satisfying. The happy couple are just married and saying long goodbyes to Cinderella’s father, as well as her stepsisters and brothers, who I suppose have recovered from their nastiness now that they are not under the influence of the stepmother. Meanwhile, other couples are saying tearful goodbyes as soldiers continue to be sent off to war to fight the Axis powers. The lighting captures the lovely warmth of the late day sun as the dancers strike tableaus of embraces and kisses and sweetly intertwined fingers. As Cinderella and Harry step onto the full-sized train car on stage, the sun appears to be setting and the tender dances of the remaining couples is cast in a near silhouette. It is a lovely, bittersweet ending that eludes to the promise of a new day when the war will be won and the London blitz a thing of memory.