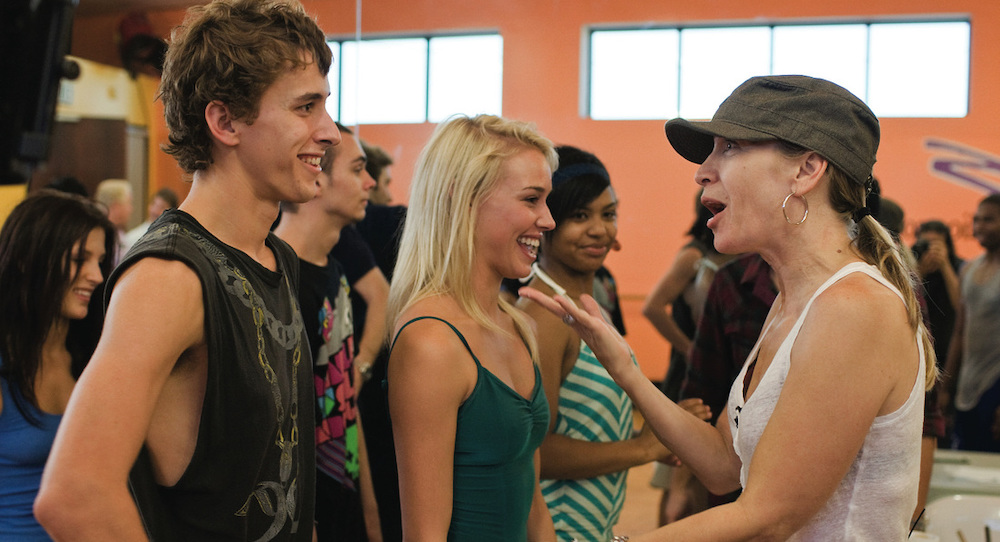 The Marvelous Mrs. Maisel, Lenny Kravitz, Austin Powers, Bunheads, Target, GLOW, Katy Perry, Dr. Pepper, Fame, Little Miss Sunshine, Showgirls, Spider-Man,The GAP, Cirque Du Soleil, Gilmore Girls, Westworld, Adele, L’Oreal, Charlie’s Angels, 13 Going on 30 and Celine Dion. You’re probably familiar with most — if not all — of the iconic shows, brands and celebrities listed above. But only one person can tie them together…the choreographer behind it all (and, if you can believe it, much more) is Marguerite Derricks. 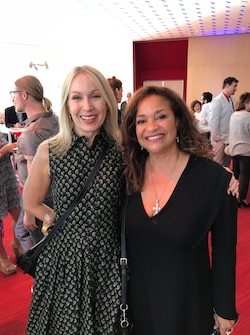 Derricks was born in Buffalo, New York, and began as a bunhead herself. Aspiring for a professional dance career, she quickly learned that strong technique, versatility and tenacity were what could help her stand apart from the rest. Her “big break” came on the hit television series, Fame, working for choreographer Debbie Allen, who became her mentor and friend. Derricks took those qualities that helped her book Fame throughout her career as a professional performer. And even after “retiring” from the stage herself, that talented, passionate and hard-working reputation continue to make Derricks one of the most sought-after choreographers in the industry. She remains the only person to have won three consecutive Emmy Awards for Choreography and, while her resume of work will always be iconic, she keeps pushing the boundaries and surprising audiences with each new project that comes her way.

Dance Informa was lucky to sit down with Derricks for an interview (literally in the break during a long day of auditions). Amidst her jam-packed schedule as a choreographer, currently hopping from coast-to-coast for Amazon’s The Marvelous Mrs. Maisel in New York City and Netflix’s GLOW in Los Angeles, she carves out the time for another passion —  teaching. 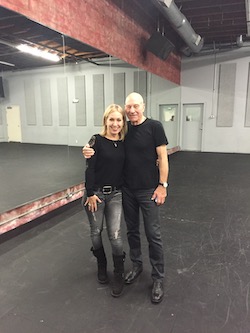 Derricks is the OG definition of a “master teacher” — akin to the greats like Frank Hatchett, Phil Black and Luigi, who are sadly no longer with us. A master teacher, by the old-school definition, is someone with an enormous amount of experience and training. Master teachers teach more than steps; they are committed to cultivating the next generation of professional dancers. UNITY Dance Organization crafted a comprehensive description of what makes a master teacher. A few key points state that a master teacher…

A master teacher, from years of experience as a professional performer, an associate, a choreographer and as a teacher, must have patience and knowledge to cultivate students’ unique potential. “Say I’m in class and give a dancer a technical correction because she’s not hitting that triple attitude turn,” explains Derricks. “And then, she gets it. For me, that’s thrilling, and it’s thrilling for the student, too.” 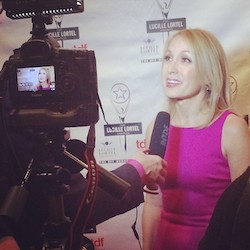 She adds, “I am good at what I do. I know how to train dancers. It’s a lot more than giving steps; I train them for life. I see a lot of young kids out there — teens and even pre-teens from reality shows — teaching these so called ‘master classes’. It’s mind-boggling. A thirteen- or even eighteen-year-old dancer can’t impart that wisdom yet. I only feel in the past five years would I attach ‘master’ to my title. I joke with my friends that ‘master’ means ‘old’.”

And if you’ve taken a class from, auditioned for or worked on set with Derricks, you know that she is the realest deal. As a choreographer, her career took off thanks to a little movie called Austin Powers.  “Austin Powers changed my life,” says Derricks. “After I did Showgirls and Striptease, everyone was whispering behind closed doors that my career was over, that I’d be pigeonholed as the ‘stripper’ choreographer. And then Austin Powers came along, and in the first film, Austin does a striptease for the fem-bots…and I used all my iconic Showgirls and Striptease moves to make fun at myself.” And also, maybe to poke fun at her naysayers, too.

“Austin Powers was my moment of ‘pop culture’,” Derricks notes. Entertainment Weekly dubbed her the “Go-Go Girl” because of her work on Austin Powers and then choreographing The GAP’s Go-Go campaign. Derricks soon became the go-to choreographer for all the multi-million-dollar movies like Spiderman, Charlie’s Angels and Rush Hour. 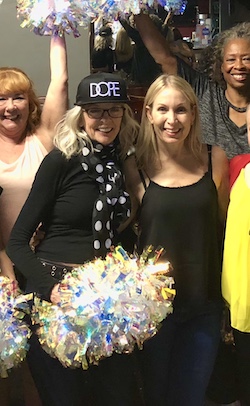 But really, Derricks has never left the pop culture scene. She recently wrapped shooting season two of the Emmy-winning series, The Marvelous Mrs. Maisel, which will be released on Amazon Prime Video on December 5. Derricks and director, Amy Sherman-Palladino, worked together previously on the ABC Family ballet series, Bunheads, starring Sutton Foster. “Amy knows how to push me,” explains Derricks. “She’ll always give me eight or nine pages of dialogue for the scene in which the choreography is taking place in the background. I always create a one-take shot (i.e. a full, fluid piece of choreography), whether I’m asked to or not. It’s challenging but exciting. As a choreographer, you have to really know the camera. There’s no better way to show dance than in one long take. Instead of just snap-shots, it gives the scene more depth and interest. It’s beautiful.”

Derricks’ understanding of work on “the other side of the table” came from her many years as a professional dancer. “So much of what I learned as a choreographer, as a director and as a businesswoman, I got from my mentor, Debbie Allen.” And Derrick’s other dance icon? You might be surprised to hear it’s Agnes de Mille. “Agnes was an amazing woman,” says Derricks with a smile. “Her storytelling was off the charts, and she was a real out-of-the-box thinker. I remember seeing a documentary on Agnes de Mille when I was a teenager. It completely rocked my world!”

For dancers who now look up to Derricks and aspire to become choreographers one day, she strongly advises becoming an assistant first. “An assistant choreographer’s job is the hardest job,” she confesses. “They are responsible for so much. And it’s not just about the dancing. Learn to be a businessperson — how to run a department, to balance budgets, to abide by union rules and to work well with people.” 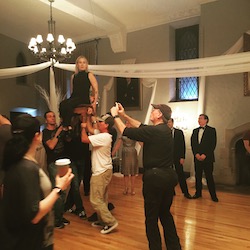 Marguerite Derricks on set for ‘The Marvelous Mrs. Maisel’. Photo courtesy of Derricks.

And for dancers who just want the chance to get hired by Derricks, it’s still about the hard work. “When I’m casting dancers, it definitely depends on the job itself,” Derricks explains. “Like today, I’m looking for dancers over 5’8” who look like 1986 Jubilee showgirls. But whatever the type-cast is, I’m watching for dancers who are technically trained. I have a passion for hiring well-trained, hard-working dancers even if I don’t need to for that particular job.”

But getting Derricks to pick a favorite project? No luck. Whether working a Broadway musical, Vegas cirque show, big-budget film, national commercial campaign or popular television series, it’s all just another (exciting) day in her life. And just as Derricks exemplifies the master teacher — rich in knowledge and experience but still yearning to learn and to grow — her goals are nothing short of awesome. Without hesitation, she puts them out into the universe: “I want to direct single-camera television, starting with a project that is music- and dance-driven. I want to produce more. And I would love, one day, to choreograph a modern or classical company.”