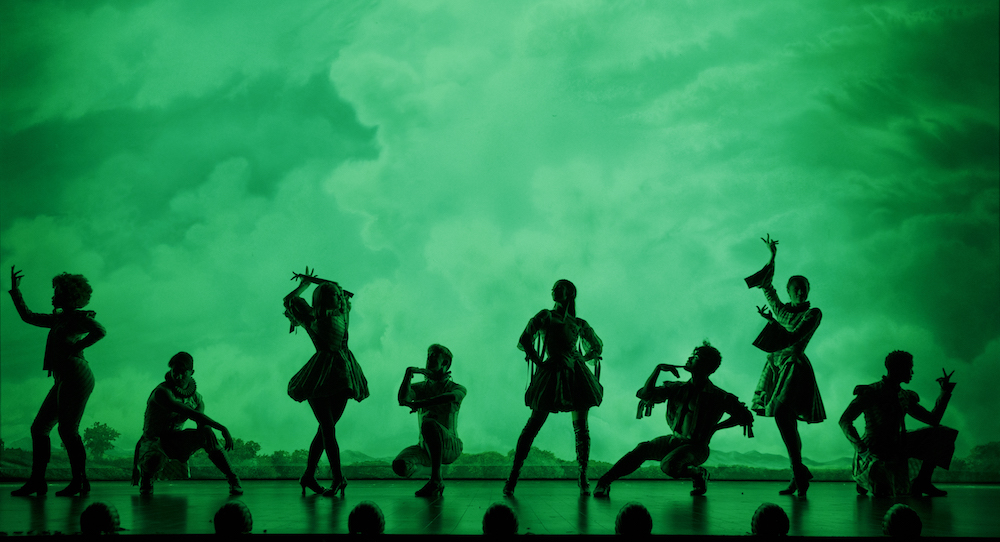 How does one even attempt to explain the new Go-Go’s musical, Head Over Heels? The Broadway show features music by the ’80s all-girl rock band, is set in the 16th century (the book based on the prose piece, The Countess of Pembroke’s Arcadia), presents dialogue in iambic pentameter, discusses contemporary jokes and themes, and incorporates a variety of dance styles from the ’60s to today. Head Over Heels is as if Xanadu, Something Rotten!, Mamma Mia!, and Twelfth Night were thrown into a blender, pulverized and combined to create something we haven’t seen before. 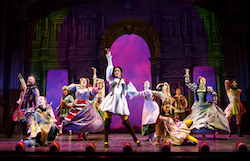 Taylor Iman Jones as Mopsa (center) and the company of ‘Head Over Heels’. Photo by Joan Marcus.

The kingdom of Arcadia has a beat (cue the opening song, “We Got the Beat”), a rhythm, a way of life that has remained unchanged for hundreds of years. But an oracle (played by Peppermint, star of RuPaul’s Drag Race and the first transgender woman to originate a principal role on Broadway) predicts that four events of chaos and catastrophe will fall upon Arcadia. Spoiler alert…all the premonitions come to pass, but the kingdom is better because of it. The musical — although a crazy mix of different eras and awareness — illustrates universal, timeless themes like love, lust, identity, responsibility, bravery and understanding. While Arcadia thought they lost their “beat”, they find a new, stronger resonance as a result of their journey. 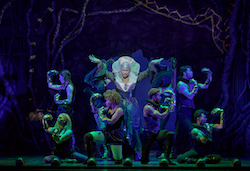 Taylor Iman Jones as Mopsa (center) and the company of ‘Head Over Heels’. Photo by Joan Marcus.

I must admit, moments of Head Over Heels had me at the edge of my seat, while others had me feeling like I was watching a cruise ship show where the talent is spectacular but the production follows a tired formula and some of the performances feel phoned-in. Looking back on the show, I can appreciate more of its overall impact, but it took me awhile to sort through my frustrations and get to that point.

The opening number and finale were undoubtedly the highlights of Head Over Heels. The show-stopping dances resemble a rock concert, with neon lights blazing, an onstage band jamming, and dancers voguing, tutting and kicking their faces in perfect unison. And the crowd hooted and hollered throughout (not your average demeanor for a Broadway audience). 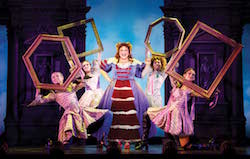 Choreographer Spencer Liff brings a new style of choreography to the Broadway stage: voguing — a sort of modern house dancing inspired by angular model-poses and drag queens who would compete and throw shade at one another through their impressive, syncopated movement. With such an electric rock ’n’ roll score, you can’t help but want to dance along with the ensemble. I wish more of this vocabulary came through in the meat of the show, which felt a bit like it was given less attention than the opening and closing. The choreography could have played a bigger role in the storytelling rather than mainly serving as transitions and dance breaks. Nevertheless, Liff’s ingenuity is apparent. The movement style somehow works magically with all the strange juxtapositions in Head Over Heels. The dancing serves as the connective tissue between all the various times, places and themes in the musical. While Head Over Heels felt like a mix of five or six shows I had seen before, Liff’s choreography was entirely new and exciting. I can’t wait to see what he’ll bring to Broadway next.