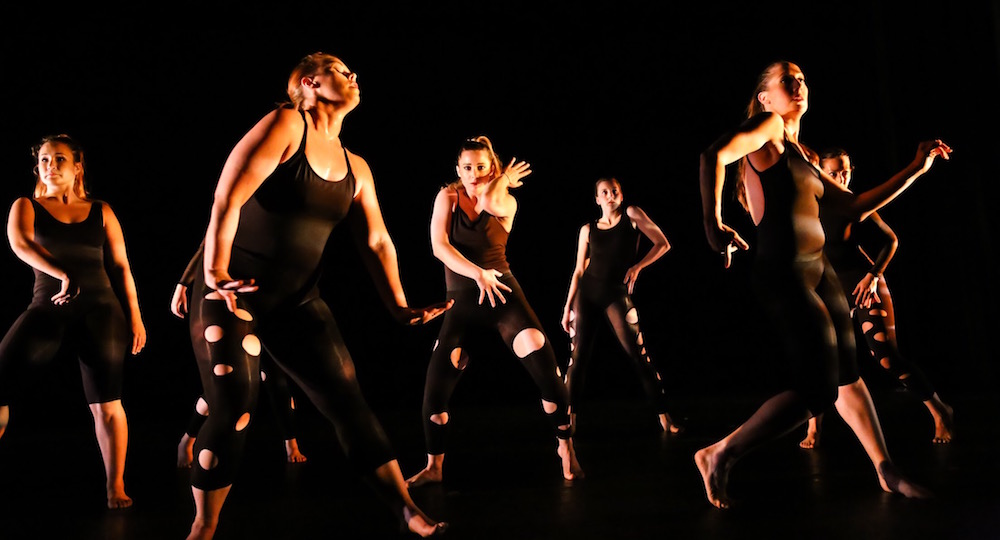 The body never lies, Martha Graham is reported to have said. Many, many dancemakers over the years have made work focusing on sociopolitical issues of the day, given dance’s ability to describe and expose raw truth. Yet Project 31’s Through This Lens used dance to speak to something even more elemental and human – our relationships with others, and with ourselves in the context of relating with others. The result was many striking and unique works. The company is under the direction of Artistic Director and Founder Kenzie Finn. 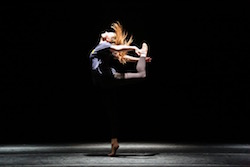 The Originals, choreographed by Finn with Noelle Santora and Kate McShea, was fifth in the show. Classic jazz dance vocabulary had an athletic and raw flavor. Cross-ball changes went into pencil turns, landing in deep lunges. Torsos snaked and rolled in horizontal and vertical. This movement was inventive and compelling. Part of me wanted those same qualities in formations.

“Window box” groupings (wherein lines stagger side to side so that there are windows through which dancers farther upstage can be seen) and other straight lines offered clarity and ensured all ensemble members were visible. Yet I craved something more original and daring. What did fit the movement better, and helped the piece’s atmosphere, were black costumes and red lighting (designed by Kayleigha Zawacki).

The dancers oozed confidence, daring and command. Through physically demanding and fast movement, they didn’t show any sign of fatigue. Each was her own person, and all those individuals harmonized within the group. Unison movement was right on point, and their lines/shapes were aesthetically similar such that none stuck out. They began to walk off, one by one, slightly stylized but in reality just moving as themselves. Because they were all “originals”, and moved in their own truth, it had been more than enough. They could exit confidently. 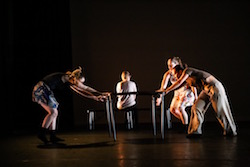 Stories, right before intermission and also choreographed by Finn, was the kind of work that can really make audience members think long after seeing it; the work not only exposed a widespread cultural narrative, but further interrogated the very existence and power of those kind of narratives. Dancers entered in lines from the wings, on alternating sides so that they intersected when coming center stage.

Formations and staging implied performative and viewing parts of living in modern society; some danced on tables, some in a diagonal clear space center stage, while others sat and watched them. Footwork and extensions were precise and intricate, matching this performative sense. Costumes with clothing stereotypically of housewives, or businesspeople, or teenagers reinforced all of that. Contrasting this sense of performing and societal self-defining were spinal undulations and rolls – representing a more fundamental, primal part of being human. 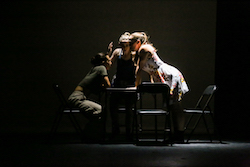 These movements were evidence of a part of these characters that wanted to throw off and escape the system in which they found themselves. Adding a feeling of isolation unto that was a following section in which different dancers and groups of dancers were each spotlit, moving similar phrasework but in individual timing and movement qualities. They came back together to dance and end the piece. The individual and collective, and the way the individual conforms to the collective the way modern modern society has compelled it to, were on clear-eyed display in this strong, striking work.

Child with the Blues, from Sasso and Company, was second after intermission and choreographed by Lacey Sasso and Colleen Roddy. Sasso and Roddy also danced the piece. Just like Blues music, it offered a feeling of sadness and hopelessness – but at the same time its own unique beauty. One dancer began moving on the floor as the lights rose. As she rose to higher space, another dancer joined her from the wings. They moved in diagonal lines – turning, moving high, moving low. The lighting was in an enticing blue-purple hue, and the costumes dark to match.

Soon came captivating partnering, seemingly contact improvisation-inspired. Some lifts moved into and out of contact, and others lingered. In one lift, for instance, the two dancers’ backs met to move through a lift with one leg bent and other straight. What differentiated these from commonly-seen lifts like it was that continuous yet slow quality, moving through them like molasses. Literal support occurred, and metaphorical support was conveyed. Just as with this movement, sometimes that support is momentary and sometimes it’s more sustained. 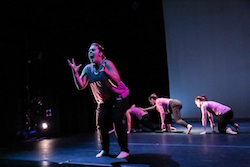 This sometimes fast, sometimes slower movement structure was present in the piece overall. For instance, contrasting quick phrasework was a lovely phrase of slowly bringing one arm up forward, up, and back to then hold the arm backward with the heels in forced-arch – which then slowly melted down. To end the work, they danced towards each other and hugged, the way only true friends really can – nothing held back, all offered in love and support. This work embodied how through the “blues”, through despair and endless trials, friends are there to make the burden lighter.

Within the Frame, also choreographed by Finn, finished the night (apart from the Finale, which brought all dancers back on stage). Most striking were the costumes, black unitards with one white leg and a white hood/mask. Not far behind this on the memorable scale was the movement phrasework, as well as the quality in which it was delivered. Spinal movement (including the neck and head), as well as more pedestrian movement filled with intention, offered much nuance.

That pedestrian movement connected more technical staples – including turns, leaps and low extensions (seeming to be more about energetic continuity than about height). Formations kept shifting, given these pedestrian connecting steps – walking, running, stepping deeper to lunge. Nuance came through these formations as well; there many shapes and images to discover as the formations moved. There were also moments of stillness, bringing further nuance in contrast to the otherwise continuous feel of the movement. 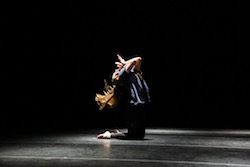 The costume brought a harlequin feel, but also that of a subject of in a painting – given also the title Within this Frame. One could draw a line from these characters to deep philosophical matters, such as the nature of art and dancers as the subjects and instruments of dance art. There was not a significant amount of interaction between dancers as autonomous, feeling people – they were more so mechanical. On the other hand, the energy of dancers together on stage spoke to people moving together in the world.

Lights went down, and I was still chewing on these questions of art and people together in space. To me, raising the questions – but stopping short of preaching prescriptive answers – is an accomplishment of truly meaningful art. That description applied to much of the aesthetically pleasing and conceptually astute work in Project 31’s Through This Lens. I left the theater still chewing on big questions in my mind. Let’s remember art’s ability to make that happen, and commend the art that does so.