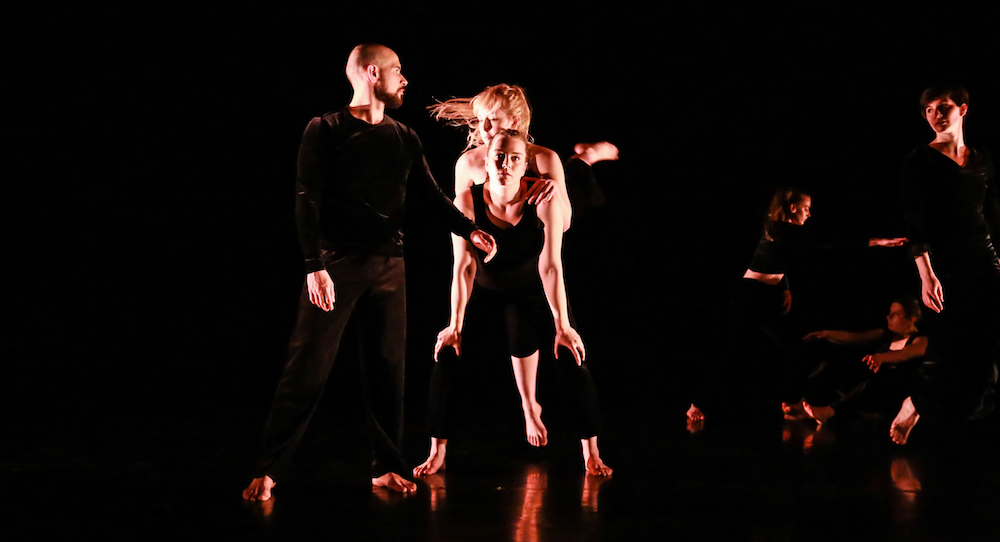 Modern life can get so routinized – hence, “the grind” and “working for the weekend”. Even as I was traveling to this show, I was working away on my cell phone. Ruckus Dance’s Baby’s First Show brought me out of that stressful “get it done” mindset to appreciate creativity, honesty and vulnerability. How? The “wow” factor – both in athletic, soulful dancing and theatrical elements that brought a shock factor. This was Ruckus Dance’s first evening-length show, under the direction of Artistic Director/Founder Michael Figueroa. 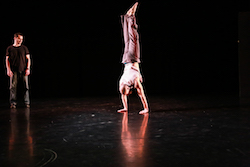 Ways of Rendering a Man Blind kicked off the show. The work began with Figueroa walking out in the dark. “You already see it,” he said. As the lights came up, he turned around, naked but cupping his genitals. He shrieked and turned back around. This was on one level a shocking, cheeky way to open up a show. On another, it spoke to the naked vulnerability of being a live performer – no additional takes, nothing to hide behind, just you and the creative content.

Then he donned briefs and put on roller skates. He started telling a childhood story, the one he was thinking would be “perfect for this solo” – one of those we all have, when we might have been seriously physically hurt (or actually were). He called up audience members to engage in various antics, and then finally blindfold him.

He explained to the audience members and the then-onstage volunteers how to signal to him if he was about to crash, and then proceeded to roller skate blind-folded. “I do have a BFA, but I wanted to see if this would be more interesting than choreography,” he said. I was almost crying I was laughing so hard. 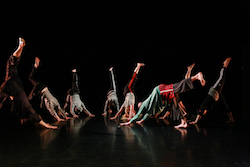 As a dance “grad” myself, this resonated with me. Yet I could see how it might not resonate with non-dancers. His infectious energy and joy were accessible to all, however. The roller-skating wound down, and he went briefly offstage to get fully clothed. He danced a solo of many levels, many speeds and many qualities.

Certain acrobatics, such as flipping from sitting to legs vertical while resting on the chest, were just breathtaking to watch. Some battements were high and with an upright torso, others were parallel à la seconde and the torso reaching the other way at horizontal. The solo wound down, and the lights faded to black. Yet my mind was still chewing on the various levels of meaning within this first work.

After some banter and more serious sharing from the Ruckus Dance Development Director and a Ruckus dancer, a duet from Figueroa and Sonya Santvoord began. In the same black bell-bottomed unitard, they moved improvisationally (it seemed) and narrated their movement. “We should go over that part,” one said, and they talked through some movement.

Figueroa walked up through audience seating and even tried to hang on a building structure, saying, “I saw this at the [Institute of Contemporary Art], and I thought it was important.”

Again, I laughed almost to the point of crying, and others were also laughing. Santvoord spoke about being interested lately in “head-tail connection”. Figueroa spoke about moving with the pelvis. Again, some of this seemed a little jargony for non-dancers. Yet their authenticity was clear, and it was all accessible enough to offer non-dancers in the audience a window into a dancer’s world. 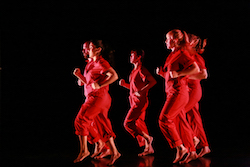 Ending the first act was gluten free – literally an all-bread food fight. The cheekiness factor was off the charts. The performers wore black with white aprons. The music was a dramatic classical music score, underlying their hurling of bread loaves. A referee figure helped keep it in a structure and out of hayhem.

The two groups lined up on opposite sides of the stage, and on the referee’s whistle, they ran for the basket of bread at centerstage. One group was the victor at the end. The subversion of what audience members would expect to see from a dance performance was very postmodern in nature but also very unique and clever. It also fit in the world of 2018, with “gluten-free” as something some call just another opportunistic dieting trend.

After intermission was another happening that audience members didn’t expect – a chance to come up on stage and slow dance. Underlying this was a pretext of “you’re all going home to make love anyways,” as Figueroa had said and was in the program. Clearly, this was not a show meant for families with young ones! Audience members laughed and whooped in acknowledgement and admittance.

The show ended with Objects Lay, People Lie. The dancers wore orange-red jumpsuits – prison uniforms? They moved in strong unison, powerful movement with a clear sense of “overcurve” and “undercurve”. At one point, they looked out to the audience together, putting us in their position of being gazed upon. Were they prisoners to our gaze?

Another sense of confinement came with Figueroa’s offstage shouts “I love you…how many times do I have to say it?! I told you yesterday!” – a confinement within a struggling intimate relationship. At a few different points, the dancers also “tugged-a-war”-ed, pulling back and forth in lines and circles, contributing to the air of tension and construction. It’s also not something we expect to see in a dance performance! 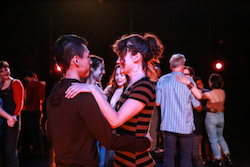 One section was truly shocking – the dancers screamed “Aah!” quickly and loudly, over and over, while they writhed and jerked on the floor. It was perhaps the most striking example of what the performance did much of – completely defy our expectations, and challenge the norms that created the expectations in the first place!

After this, Marissa Molinar offered a compelling and memorable solo – turning and leaping up high, lunging deeply, and smoothly executing acrobatics such as pushing up to a Wheel Pose. Further ensemble and small group work commenced, with moving from wing to wing. This made me feel a sense of quick change and uncertainty. The ensemble moved to center and fell into a star shape on the ground. The lights faded down.

This wasn’t the traditional denouement, the winding down of actions, that we often see in live performance. Just like with many other times in the show, this defying of our expectations – along with enjoying beautiful dancing – could take our mind away from to-do lists and routines. Getting out of this stupor of the work-a-day world is something dance can do for us, if we let it.