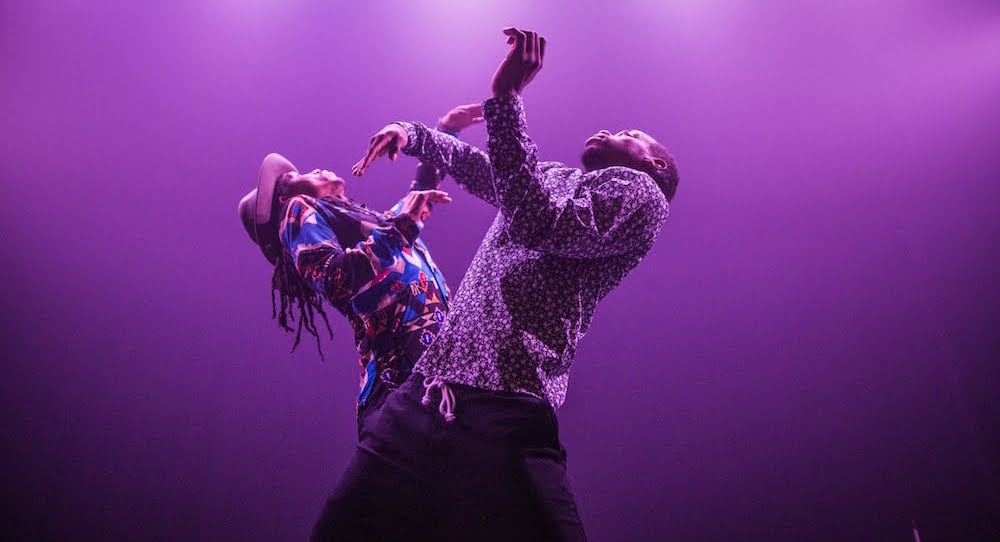 The NYC premiere of Love Heals All Wounds, directed and choreographed by Jon Boogz and Lil Buck, with spoken word poetry by Robin Sanders, was a shining example of how dance can simply and straightforwardly educate an audience. Buck, who specializes in jookin, and Boogz, who specializes in popping, used their styles to effectively show how dance is a language with which one can approach and comment on social and political issues. In fact, the two popular performers have co-founded an organization called MAI (Movement Art Is) focused entirely on using movement to inspire change. A lot of the choreography for this show, which was developed in collaboration with the dancers we saw on stage, was literal but never trite and always well performed. 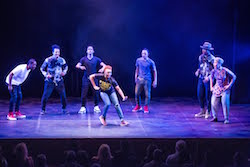 The show begins at a table, the poet Sanders reading the paper, clearly expressing concern with what she has come to know will be in the news every single day. With these issues in a never-ending negative cycle continually perpetuated by us, by humans against humans, our own actions destroying our societies and our world, she references the song “What’s Going On” because it’s still and forever relevant. What is going on with us? What is wrong with us that “things ain’t changing” and if they are it’s not really for the better, treating other people who aren’t just like us as if they are lesser than us. Immediately, what she is saying brings up current issues, including the wall between USA and Mexico, the wall that we build out of fear, the wall that we build more out of hatred and insecurity than we do for any reasons that would actually save us from anything. We should know better; you should know you “can’t build a wall so tall that it protects you from yourself.”

The dancing and poetry, presented as a series of vignettes, target sociopolitical issues that we know are causing suffering and tearing people apart but which we actively perpetuate. We perpetuate hate due to our own hatred and fear. We perpetuate destruction out of our own ignorance and conceit. Consider these imminently relevant issues brought up just within this one hour of impactful art: racial bias in the criminal justice system; the shooting of unarmed men of color by police; building a wall between peoples based on races, classes, genders or simple geography; climate change; the oppression of women, who should wear “dignity as jewels”; and activism. 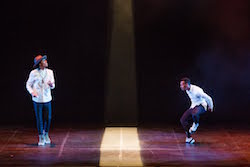 The first piece highlighting the mass incarceration of people of color and the problem of jails for profit also introduced the dancers and their beautiful range of movement under the umbrellas of popping and jookin. We met the whole cast in the piece about the wall, finding that individuals who care tremendously sometimes can’t achieve the change they desire on the their own.

“Lay bricks not to build a wall. Lay them to build bridges that connect us all.”

The dancing reached its choreographic peak in the climate change vignettes, each one introduced by Sanders’ Mother Earth, who asks, “Do you remember me?” Boogz took the lead with water and fire, leading his dancers through intricate fluidity and rapid-fire crackling. Buck led his dancers through air and earth, light as a breeze and heavy as molten rock. This quartet of trios was the only choreography in abstraction, and it suited the elements beautifully.

Hopefully, this show makes its way to schools of all levels around the country to share some complicated sociopolitical issues from a simplified, peaceful and approachable viewpoint that gives the audience hope and the suggestion of empowerment to do something with it. 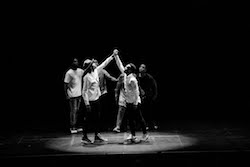 “Time heals wounds, but love does, too. Where there is hate, love is the cure. Love is the force that pushes mankind forward.”